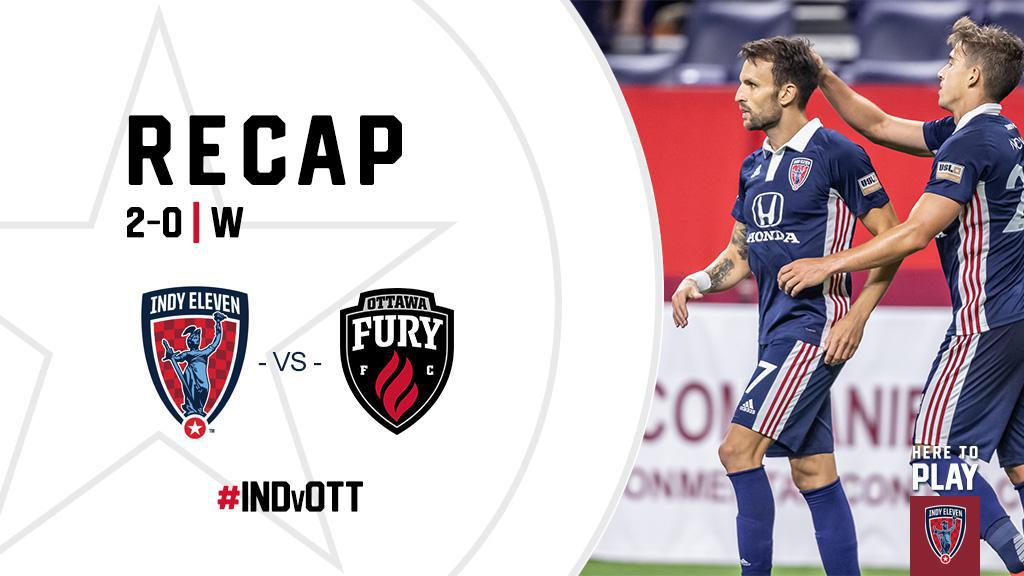 Indy Eleven used a pair of goals by midfielder Ayoze and a stout defensive effort to post a 2-0 win over Ottawa Fury FC at Lucas Oil Stadium.

The club-record 22nd straight home game without a loss propelled Indy Eleven (16W-5L-5D, 53 pts.) to a share of the top spot in the Eastern Conference with New York Red Bulls II, on which Indiana's Team holds a game in hand on as the season enters the final six weeks of play.

This evening’s triumph gave Indy Eleven another club best as well, its 16 wins now standing as the most in the team’s six-year history – and still with eight regular season games left to improve on the mark.

“It’s the first time the franchise has gotten to 16 wins in a season. Certainly more than when I was here last year,” said Indy Eleven Head Coach Martin Rennie. “Those are big milestones that take a long time to build and I think we’ve been able to do that for over a year at home. There’s a lot of positives for us and a few things we need to work on. We’re starting to put together a good season.”

Ayoze started his dangerous night early, striking from distance in the 6th minute and creating numerous chances from his spot on the left wing. The veteran Spanish winger doubled his pleasure from 20 yards out in the 55th minute, his third goal of the season putting the nail in the coffin of a listless Ottawa side.

Indy Eleven goalkeeper Evan Newton made four saves on the evening to post his ninth shutout of the season and Indy's 12th overall, good for the second most in the 36-team USL Championship. The win pushed Indy's impressive home record in 2019 to 10W-0L-4D, a ledger that includes a 19-4 advantage in goals scored and 10 shutouts.

Indy thought they struck first via forward Cristian Novoa in the opening minutes of the match, but unfortunately for the striker, who received his first start tonight, the goal was ruled offside. Ayoze would soon balance out the nullified finish in the sixth minute after unleashing a shot from distance that took a deflection off Ottawa defender Thomas Meilleur-Giguere and found the top left corner of the net, leading to the Spaniard’s second goal of 2019.

The Boys in Blue nearly added a second in a similar fashion just three minutes later. After Ottawa goalkeeper Callum Irving handled the ball outside the box, midfielder Tyler Pasher struck the ensuing indirect free kick through the wall of Ottawa defenders. The ball deflected off a sliding Ottawa player and nearly redirected into the exact same corner that Ayoze’s shot found, but instead sailed inches over.

The game’s next full chance didn’t present itself until the 42nd minute rolled around. A corner kick played in by Ayoze found the head of an open Karl Ouimette at the Ottawa penalty spot, but the Canadian defender failed to convert the open look as his effort gently found the arms of Irving for an easy save. The chance would act as the last action of the first half as the Boys in Blue entered the locker rooms with a 1-nil lead.

Ten minutes into the second half Ayoze would strike again, doubling the lead of Indiana’s Team. Midfielder Drew Conner found space in the Ottawa box and cut a diagonal pass back into the feet of the Spaniard at the center of the box, where he took a touch and laced a left-footed shot into the top right corner.

Forward Ilija Ilic nearly made his mark in the 71st minute from an Ayoze corner kick, the in-swinger finding the Serbian at the back post after the ball lofted over Irving’s head. Ilic must have thought he scored, but the left post came to Irving’s rescue as the effort glanced off the woodwork and away.

Three minutes later, Irving was forced into a goal saving extension. After quick footwork freed substitute midfielder Matt Watson, the Englishman tore down the right flank and played a low, driven cross into the center of the Ottawa penalty area. In an attempt to clear his lines, Ottawa’s Charlie Ward nearly deflected the cross into his goal, but a timely reaction from Irving kept the deflection from crossing the line.

The game’s last action would again come by way of another Ayoze corner kick, which defender Neveal Hackshaw settled at the back post and played into the center of the six-yard box that connected with Ouimette, whose goal looked certain if not for a headed goal line clearance.

Indiana’s Team will return to Lucas Oil Stadium this Saturday, Sept. 14, against Bethlehem Steel FC for its annual Hispanic Heritage Night, presented by Financial Center First Credit Union, which will be preceded by La Plaza’s annual Fiesta Celebration on Georgia Street throughout the afternoon. Kickoff for the contest is set for 7:00 p.m., and tickets remain available for as little as $15 at indyeleven.com/tickets or by calling 317-685-1100.

We've narrowed down the dozens of great shots from Indy Eleven photographers Trevor Ruszkowski & Matt Schlotzhauer to our top 11 selections. Be on the lookout for more shots on our Facebook gallery in the upcoming days.