Forwards Ilija Ilic and Dane Kelly score in second half to push Boys in Blue back to top of Eastern Conference standings, home unbeaten streak to 23 games 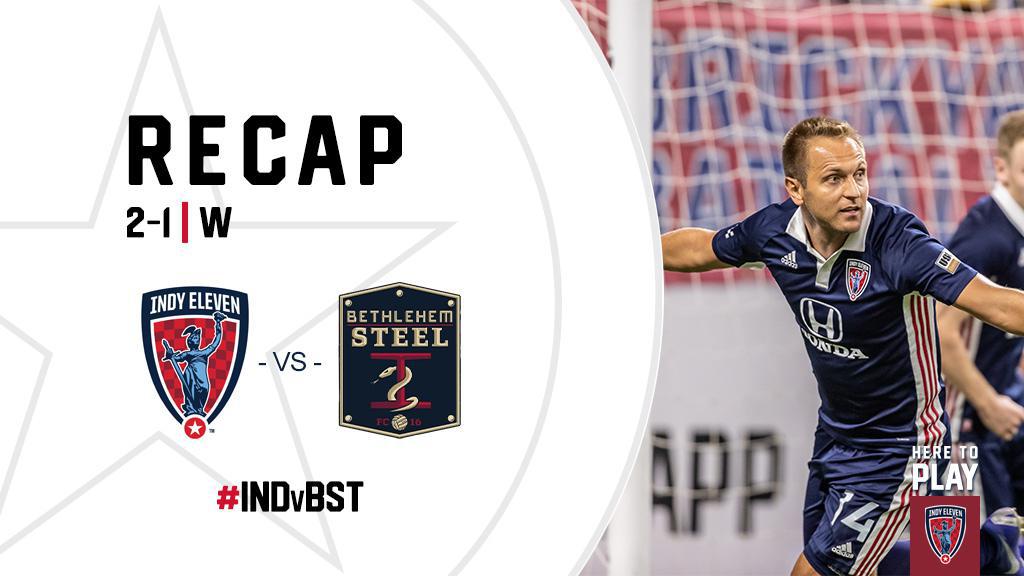 Goals from Indy Eleven forwards Dane Kelly and Ilija Ilic secured the club’s 23rd undefeated match in a row at Lucas Oil Stadium and a spot in the 2019 USL Championship Playoffs in a 2-1 win over Bethlehem Steel FC.

With the win – the sixth in Indy’s last eight games – Indiana’s Team again shares the top of the Eastern Conference table with New York Red Bulls II, tied on points (56) and overall league wins (17). While New York technically holds the goal differential tiebreaker, Indy Eleven still has one game in hand on the Empire State squad.

The 80th minute game-winner by Kelly was his third for the Boys in Blue in less than a month, and all have come at home after the 80th minute of play. The goal allowed is the first on home turf since Charlotte Independence snuck one past ‘keeper Evan Newton on August 25, and just the fifth all season for the USL Championship’s top defense.

“The character to come back was excellent. Obviously there are a bunch of really good players on this team. Most teams have that, but there is a connection between the players,” said Indy Eleven Head Coach Martin Rennie. “They fight for each other and care about each other. They have a good culture in the locker room. It’s a unique group of players and that’s what I think makes the difference on a night when players are tired.”

The Boys in Blue nearly opened the scoring seven minutes into the game via leading goal scorer and midfielder Tyler Pasher. After defender Ayoze played a lofted ball into the box that freed Pasher on the right, the Canadian took a touch into space and placed a shot that nearly forced through the legs of Bethlehem goalkeeper Matt Freese.

Indiana’s Team continued to press and nearly broke the deadlock 10 minutes later. Forward Cristian Novoa, receiving his second consecutive start, played a back-heel pass to Ilic inside the left side of Bethlehem’s penalty area. The Serbian took a touch onto his right foot and attempted a curling shot that ultimately struck the crossbar and edged over the goal.

Ilic nearly found his place on the scoreboard again in the 23rd minute of play. Multiple give-and-goes between Pasher and Ayoze eventually led to a cross from the Canadian that connected with the head of Ilic at the back post. Ilic’s header bounced off the ground and nearly crossed the line, if not for a goalline clearance from Freese, who continued to have an impressive first half of play.

Bethlehem Steel created their best chance of the first half in the 25th minute after forcing Indy defender Neveal Hackshaw into a turnover near the center line, Bethlehem forward Michee Ngalina stealing the ball before bursting down the right flank. After making an impressive run into the Indy box, Ngalina unleashed a driven shot in a one-on-one attempt with Indy ‘keeper Evan Newton. The 31-year-old goaltender denied the first effort before a quick second came his way, which he again denied for a quick double-save.

Indy continued to dominate possession and generate chances the rest of the half, but remained unable to convert as the sides entered the locker rooms even at nil-nil.

Ilic finally broke the deadlock eleven minutes after the start of the second half, scoring the goal he looked certain to get in the first half. Indiana’s Team earned a corner after an extremely impressive point-blank reaction save from Freese, the ensuing set piece finding midfielder Macauley King, who played a lofted pass into the box that connected with Ilic. The Serbian displayed remarkable control taking the ball down in the six-yard box with a head-high touch before smashing home a first-time shot for his second goal the of season.

“I’ll tell you something – the strikers win you the game, but defenders win you the championships,” said Ilic, who was quick to credit the other side of the ball after the match. “So if you have a good defense throughout the season, that’s how you get to the top. I would say that this year the defenders are actually much better than the strikers for us. We have the best defense across the league and I’m really happy for the guys. They just keep providing clean sheets.”

Bethlehem nearly answered in the 59th minute through a corner kick. Steel FC defender Nathan Harriel nearly nodded a corner over Indy’s goal line, but the crossbar came to Newton’s rescue, deflecting the ball back into play. Harriel returned fire as the redirected ball fell back to his feet,  but a goalline clearance by defender Paddy Barrett kept Indy’s sheet clean for the time being.

Despite Indy’s best efforts to retain the lead, Steel FC equalized from a short corner in the 76th minute. The ball would be pushed off to Bethlehem’s Ngalina, who played in a cross to the back post that found teammate Ben Ofeimu lurking in Indy’s six-yard box. The center back caught Indy’s Newton off his line and tapped into an open goal, bringing the scores even at 1-1.

Bethlehem’s equalizer wouldn’t last long, as four minutes after scoring Indy would surge back into the lead. A long ball by Indy midfielder Drew Conner found Pasher at the top of Bethlehem’s 18-yard box, and Pasher played a square pass with his head just prior to being fouled by Freese, who rushed off his line to attempt to clear. Kelly played on and took full advantage of Bethlehem’s open net with a half-volleyed strike to regain the lead at 2-1.

Hungry for more, Kelly nearly doubled the lead twice in the final 10 minutes, but Indy would eventually settle to possess quite comfortably through the end of regulation and six minutes of stoppage time – and then some – to secure yet another home win and a second consecutive berth in the USL Championship’s postseason.

“We made the playoffs tonight with five weeks to go. That’s a huge achievement. Every club looks to make the playoffs and we’ve done that,” Rennie said. “We have much higher aspirations than that. We want to be at the top and give ourselves the best chance to win when the playoffs come. But that’s quite a while away. We’ve still got a lot to play for, but we’ve got playoffs to look forward to in the future. Finish first would be our goal.”

Indiana’s Team will hit the road its next match, as the Boys in Blue travel to Alabama to take on Birmingham Legion FC next Friday, September 20. The first match in a three-game, nine-day road trip kicks off at BBVA Field at 8:00 p.m.