Boys In Blue Record Loss on the Road, Remains in Second Place on Eastern Conference Table 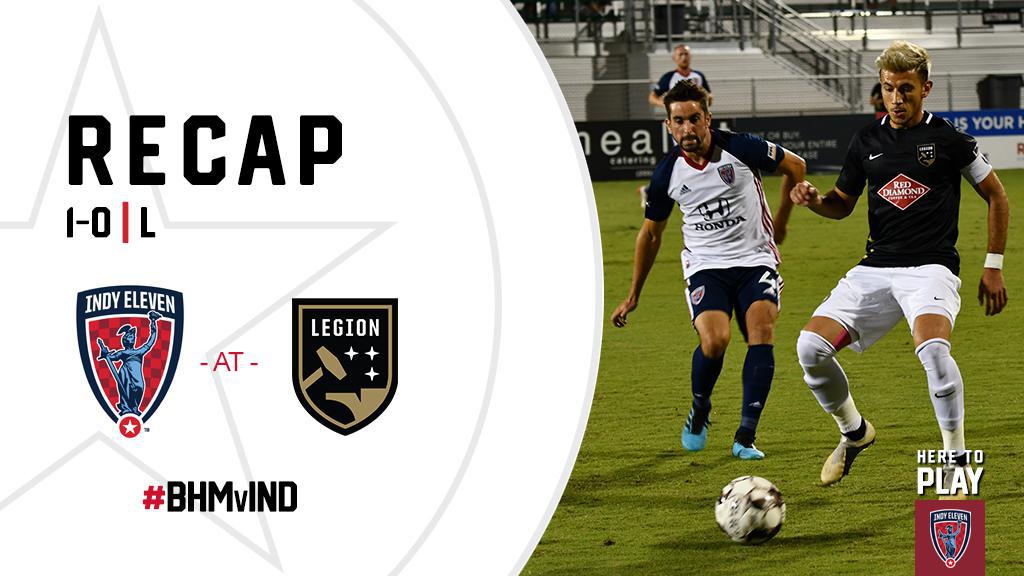 A tough Friday evening as Indy Eleven fell on the road to Birmingham Legion FC, 1-0. A first-half Legion goal and a controversial second-half red card called against the Boys in Blue saw Indiana’s Team fall just short of claiming at least a point away from home.

“It’s not the result we were looking for,” said Indy Eleven Head Coach Martin Rennie. “I think that the first half was pretty tight and obviously we went into halftime a goal down. We fought hard in the second half and we felt confident we were going to pull back a goal or two, but then we had that red card, which seemed really harsh. We had to then play a man down, a goal down and away from home. I think that actually acquitted ourselves well and we fought hard for the rest of the half, but it was a big disadvantage only having 10 men.”

Despite the loss, Indiana’s Team still shares the top of the Eastern Conference table with New York Red Bulls II, tied on points (56) and overall league wins (17). While New York technically holds the goal differential tiebreaker, Indy Eleven still has one game in hand on the Empire State squad.

Birmingham had the first look at goal just five minutes into the match. Legion forward Brian Wright made the most of a lucky opportunity in Indy’s defending half after striking partner Kasim Prosper intercepted a pacey grounded pass from Boys in Blue midfielder Tyler Gibson. Wright chased the ball a short distance through Indy’s back line for a shot just over the 18-yard line, but Eleven ‘keeper Evan Newton quickly fell to bat the attempt away for his first of six saves on the evening.

Indiana’s Team returned fire 13 minutes later. Midfielder Tyler Pasher darted through the top of Legion’s penalty area, getting on the end of a cheeky back-heel pass from forward Ilija Ilic. Though the Canadian’s shot skidded wide of the Legion goal, the sideline official called his shot offside.

Danger loomed once again for the Boys in Blue when a foul committed by defender Neveal Hackshaw awarded Birmingham with a dangerous dead ball at the top of Indy’s box in the 25th minute. Legion’s Razak Cromwell stepped up and hammered a shot far over the Indy Eleven crossbar, keeping the scores level for the time being.

Unfortunately, it was Birmingham who put the first goal on the scoreboard near the death of the of the first half. A lateral pass found Legion defender Akeem Ward not far from the corner flag for an in-swinging cross into Indy’s penalty box. The cross deflected off Hackshaw’s head, moving a short distance up the pitch and back to Ward’s feet for another quick cross. The shot looked to be heading out of play, but not before a leaping nod from Wright sent the ball over the line in the 39th minute.

Indy came out of the second-half gate strong, finding the first on-target attempt just 62 seconds into the restart. A Legion turnover fell to the feet of Boys in Blue midfielder Drew Conner in the home side’s defending half. A short through pass from Conner was enough to free Pasher for a tearing run along the edge of Birmingham’s box. A fast shot to the near post was nearly fruitful for the 25-year-old, but Legion goaltender Matt Van Oekel stood strong against the attempt.

To make matters worse, Conner was shown a controversial red card following challenge on Legion’s Wright, forcing the Boys in Blue to play a man down from the 53rd minute on.

A resilient Indy attack came close to leveling the score in the 59th minute. Ilic came close to scoring his second goal in as many games when the he nodded an Ayoze corner kick on frame from close range. Luck wasn’t on the Serbian’s side, as the forceful header rebounded off the far post, cleared away seconds later by a scrum of Legion defenders.

Birmingham continued to test Indy’s back line as the clock ticked towards the 90th minute, firing two shots wide and one on target in a two-minute frame. The match moved into seven minutes of stoppage time, a critical span for Newton, who recorded three back-to-back saves.

“He hasn’t been used to playing that exposed because we wouldn’t normally be leaving so many players high, especially with a man down,” said Rennie. “When Birmingham did get their chances, Evan came up big. You probably don’t get to see all of those saves very often because we do our best to not allow as many chances, but he certainly stepped up when he needed to.”

Newton’s shot-stoppers weren’t enough to spark an equalizing run for Indy before the match came to its conclusion. Friday’s result moves Indy’s away record moves to 6W-5L-1D, a franchise best for Indiana’s Team.

“We’ve got a franchise record for the most away wins in a season, so we’re doing well away from home – better than the club has ever done,” Rennie said. “We’ve had a really good season and our players are entitled to a bad half, but that’s something down the stretch that we really need to get focused back on. We need to pick up the wins we won in the beginning of the season and now is the time to get them for sure.”

Indiana’s Team continues its three-games, nine-day road trip next Wednesday, September 25, as the Boys in Blue travel to Georgia to face Atlanta United FC 2. The contest starts at 7:30 p.m. ET and will be streamed exclusively via ESPN+.