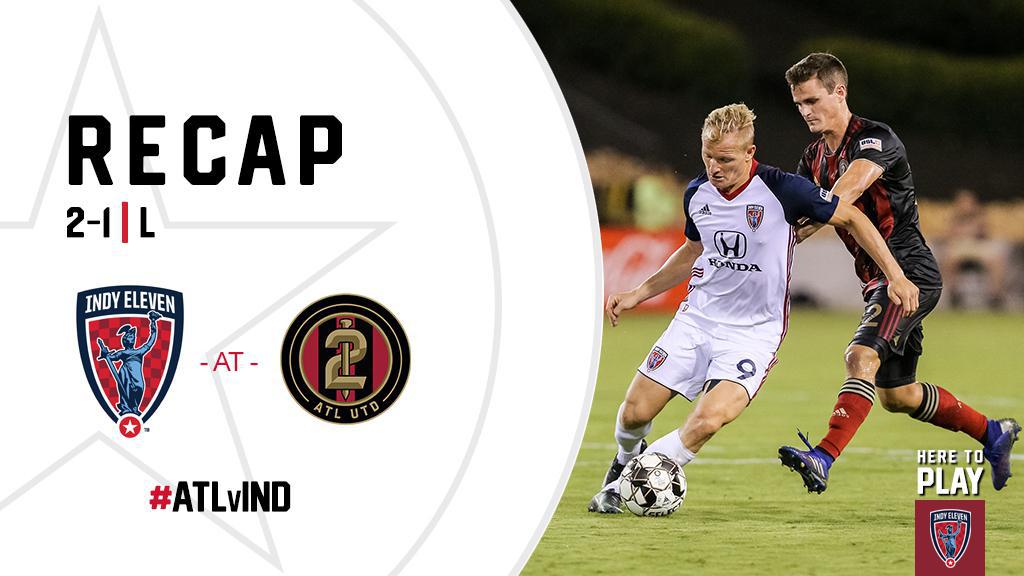 Despite a hard-fought effort, Indy Eleven falls on the road 2-1 to Atlanta United FC 2. Indiana’s Team drew level in the 36th minute when defender Paddy Barrett recorded his first goal of the season, but a second-half goal by Atlanta’s Andrew Carleton proved to be the game-winner for the home side.

“I think it was a very open game. We’re disappointed to give away a goal on a set play because we really hadn’t given up too many chances, so that was something we have to improve on,” said Indy Eleven Head Coach Martin Rennie. “It’s not something we really have made too many mistakes on this season, but that was one we needed to improve on.”

Indy Eleven move to a 17W-7L-5D (56 pts.) record on the season, engaged in a three-way tie on points for first place with New York Red Bulls II and Tampa Bay Rowdies, with Nashville SC and Pittsburgh Riverhounds SC trailing by one.

The first chance of the game came just seven minutes in when Indy Eleven midfielder Tyler Pasher followed a pacey run with a square pass across the face of Atlanta’s goal. The grounded pass skid just inches out of reach of Indy forwards Gabriel Rodrigues and Eugene Starikov to tap the ball in, the opportunity ending wide of the far post. Two minutes later, Starikov nearly headed home a free kick swung in by Indy defender Ayoze, but his effort landed comfortably in Atlanta ‘keeper Brendan Moore’s arms.

The home side began to ask questions in the 14th minute, Atlanta’s George Bello ripped down Indy’s right flank after gaining possession in the midfield as Eleven defender Karl Ouimette gave chase. Indy goaltender Evan Newton did enough to take away the near post as Bello shot far and struck the iron, keeping the scores level.

Atlanta would strike first, though. After absorbing the 10 minutes of pressure from Indy that followed, a corner played in the 24th minute by Atlanta’s Mikey Ambrose connected with defender George Campbell at the penalty spot. Campbell headed the ball down and forced Newton to go to ground to make the save, but the attempt forced through the goalkeeper’s glove and into the net.

The lead was short-lived as Barrett drew level 12 minutes later. Starikov came up big with another headed effort on frame off a direct free kick from Ayoze. The nod was pushed wide by Moore for a save but fell short enough for Barrett to grab the tap-in equalizer on an open net.

Indiana’s Team nearly took the lead into the half after striking the post in the 44th minute. Eleven midfielder Matt Watson flicked a square pass back to Ayoze at the top of the 18-yard box. Ayoze’s one-time effort looked on target before first deflecting off the foot of Starikov, followed by redirecting away off the post as the sides went into the locker rooms level at one.

The Boys in Blue began the second half similar to the first, immediately applying pressure and creating a chance in the 46th minute. A long ball from Ayoze located defender Neveal Hackshaw unmarked at the back post. The Trinidadian made solid contact with a header, but the effort flew straight into Moore’s arms as the game remained level.

Atlanta surged back into the lead in the 61st minute, forward Luiz Fernando played a short pass to Carleton at the top of Indy’s penalty area. Fancy footwork saw Carleton weave through the 18-yard box before slotting home into the bottom left corner, his fourth goal in as many games.

Newton stood strong to keep the game at 2-1 in the 74th minute after a ball to the right side of Indy’s box freed up Fernando for a shot on goal. Luckily for Newton, the shot was directed to the covered near post, making for an easy save. Newton came to the rescue again eight minutes later as Jack Metcalf carried the ball into the Indy box before playing a square pass to Fernando. The forward took a quick touch before taking a shot, a wide attempt that Newton would push away to safety.

Indy’s final chance of the evening came in the first minute of stoppage time, Ayoze played in a cross from the left flank into a packed Atlanta box. Despite the excellent service, the ball ended up on the roof of the net as the last opportunity of the night went begging and the final score read 2-1 in favor of the home team.

“We feel disappointed today because we feel like we missed a couple of chances in the last few weeks to put ourselves clearly out in front of everybody, but at the same time, we knew that this phase of the season would be quite a challenge,” Rennie said. “We have a lot of games in a short space of time, so we need to keep perspective on things. I think that most teams would like to be in the position we are in at the moment, but we now need to capitalize on it.”

Indy Eleven continues its four-game road trip this Saturday at Highmark Stadium, squaring up against Pittsburgh Riverhounds SC at 7:00 p.m. ET. Indiana’s Team travels north of the border four days later to take on Ottawa Fury FC for another 7:00 p.m. ET kickoff. Both matches will be streamed live via ESPN+.

Indy returns to Lucas Oil Stadium on October 5 for Fall Fest against Memphis 901 FC. Kickoff for the contest is set for 7:00 p.m. ET, and tickets remain available for as little as $15 at indyeleven.com/tickets or by calling 317-685-1100.