RECAP | ELEVEN FALLS IN FIGHT FOR FIRST AT PITTSBURGH 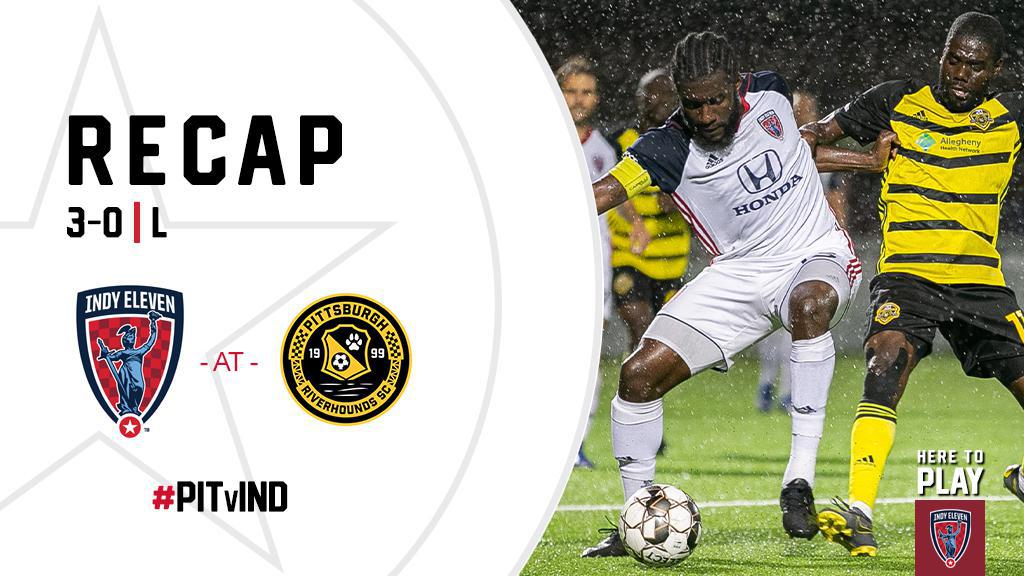 Indy Eleven couldn’t cool off the recent red-hot form of Pittsburgh Riverhounds SC tonight at Highmark Stadium, falling 3-0 in their battle for first place in the USL Championship Eastern Conference.

Despite the result, Indy Eleven (17W-8L-7D, 56 pts.) remains within a win of the top spot in the tightly packed Eastern Conference race, which Pittsburgh (16W-4L-10D) now shares with Nashville SC on 58 points. Tonight’s combatants at Highmark Stadium still control their own destiny when it comes to maximizing their chances for home-field advantage during the USL Championship Playoffs, as both Indy and Pittsburgh carry a game in hand on Nashville and third-place sharers New York Red Bulls II and the Tampa Bay Rowdies heading into the final three weeks of regular season play.

Heavy rains started in the first minute of the match, followed by lightning strikes soon after that would force a weather delay near the stroke of the tenth minute. Prior to the break it was Indiana’s Team that had the best chance courtesy of a miscommunication between Pittsburgh goalkeeper Kyle Morton and defender Joseph Greenspan, the latter’s misguided back pass putting Indy striker Dane Kelly into the area in the fourth minute. However, with his angle narrowing near the endline, Kelly’s first-time shot would bounce off the near post, denying the Eleven an early gift into an open net.

Coming out of the nearly 70-minute delay in the action it was Riverhounds SC wrestling control of the game – and, shortly thereafter, the lead. An Indy Eleven foul about 25 yards from goal set up a dead ball opportunity, which Riverhounds’ leading scorer Neco Brett drilled into the upper right corner, his 10th goal of the season giving Pittsburgh the 1-0 advantage at the strike of the quarter-hour.

Indy Eleven nearly equalized through Kelly in the 25th minute, but his header off Ayoze’s cross to the far right post was stopped by Morton’s two-handed save on his line. Three minutes later it was Eleven netminder Evan Newton coming up big himself by coming off his line to thwart a 1-v-1 opportunity for Pittsburgh midfielder Mouhamed Dabo. Eleven forward Tyler Pasher nearly evened things with a moment of individual brilliance in the 35th minute, cutting inside past two defenders and unleashing a shot from the top of the area that forced a diving save by Morton.

Pittsburgh would double the lead in the 40th minute through their captain, midfielder Kenardo Forbes, on a play that was eerily similar to his goal that forced Indy’s exit from the Lamar Hunt U.S. Open Cup at the same venue back in late May. After entering the final third with little pressure, the Riverhounds’ leading scorer used the open space to rip a blast that had the pace to beat a diving Newton to the upper left corner.

Indy had the chance to grab some momentum in the 44th minute when Morton couldn’t get to a ball that eventually landed at the feet of Kelly, who was leaning back when he fired from 10 yards out, causing his chance to miss high. In stoppage time it was Newton coming up big to keep Indy within striking distance, stopping Brett’s low shot in traffic to keep the deficit at two heading into the halftime break.

Pittsburgh was content to absorb pressure and counter to open the second 45 minutes, a strategy that proved effective as Indy was unable to produce a shot in the opening 20 minutes of the stanza. However, that stretch wasn’t without danger, as Pasher’s low cross in the 55th minute whizzed through the six-yard box and just past the far post run of Kelly. In the 62nd minute Pittsburgh nearly scored on a carbon-copy of Kelly’s opening chance of the game, this time Brett banging a shot off the near post after an errant back pass by the Indy backline.

Eleven forward Eugene Starikov tried to make an instant impact after his 64th minute insertion into the match, his low effort from just inside the area counting as Indy’s first shot of the half. A minute later it was Pasher nearly taking advantage of Morton’s adventurous habit of coming off his line, but his looping header in traffic missed over the crossbar.

In the 71st minute it was the goal scorers for Pittsburgh linking up to put the game away. Brett chipped into the left side of the area for Forbes, who used patience and footwork to beat a defender towards the endline before banging a low shot off the base of the right post and into the net, pushing the Riverhounds lead to 3-0.

Indy pressed on, nearly scratching one across in the 76th minute when defender Karl Ouimette’s header from the top of the six hit off the right post. As the Boys in Blue pressed numbers forward it opened up more gaps in the back, and Brett continued to seek his second in the 88th minute only to see his blast sent right to Newton on his line. An uneventful three minutes of stoppage time allowed Pittsburgh to register its club-record seventh straight shutout and keep it as one of three undefeated teams in the USL Championship to remain undefeated at home, alongside Indy Eleven and West-leading Phoenix Rising FC.

Indiana’s Team will finish a four-game, 13-day road swing this coming Wednesday, October 2, when it travels across the northern border to face Ottawa Fury FC. The second meeting in three weeks’ time between the “Class of 2014” rivals kicks off at TD Place Stadium at 7:00 p.m.

Indy Eleven will finally return home next Saturday, Oct. 5, when it hosts expansion side Memphis 901 FC for a 7:00 p.m. ET contest. Tickets and full details on Indy Eleven’s “Fall Fest” themed evening at Lucas Oil Stadium – where the Boys in Blue will look to continue their club-record 23-game home undefeated streak – can be found at indyeleven.com/promotions.