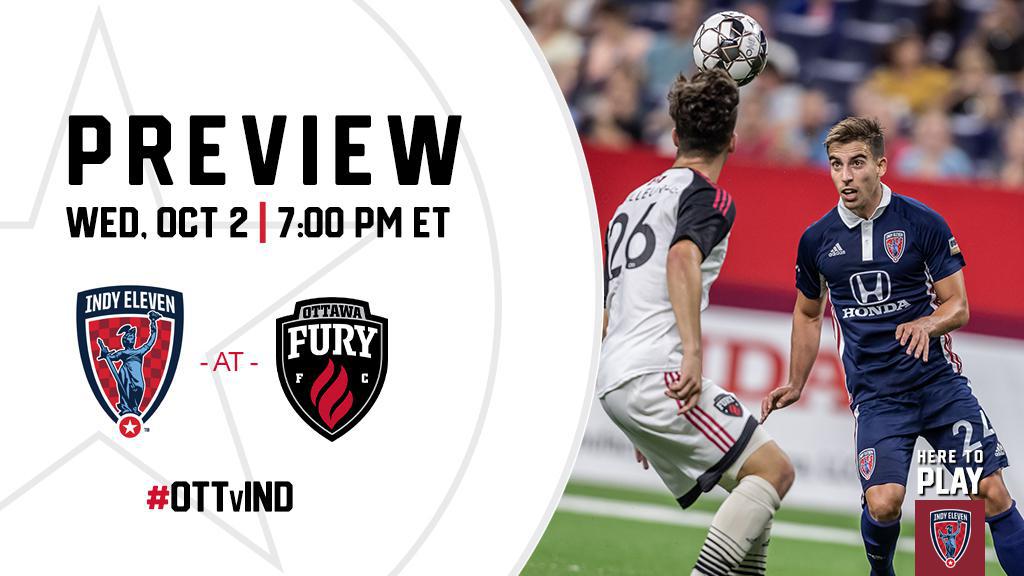 A brace from Indy Eleven defender Ayoze powered the Boys in Blue past Ottawa Fury FC 2-0 at home on September 11. The first meeting saw Indiana’s Team kept its net clear once again, recording the team’s 10th clean sheets at home in 15 games, with their most recent clean sheet coming against Ottawa.

Indy Eleven couldn’t cool off the recent red-hot form of Pittsburgh Riverhounds SC last Saturday at Highmark Stadium, falling 3-0 in their battle for first place in the USL Championship Eastern Conference. Indy nearly took an early lead after forward Dane Kelly struck the post in the fourth minute, but a strike from Pittsburgh’s Neco Brett and a brace from Kenardo Forbes sealed the deal for the home side.

Ottawa Fury FC lost for the first time in two matches, snapping the two-game winning streak the team carried into North Carolina. NCFC was able to find the back of the net three times after Ottawa’s Thiago opened the scoring in the fourth minute of the match. The three goals allowed by the Canadian club mark the fourth time in 2019 the side has given up three goals or more.

Forward Cristian Novoa has begun accruing more and more minutes since arriving to the Circle City mid-August. The 28-year-old native of Caracas, Venezuela, had been a target of Head Coach Martin Rennie’s since the start of the 2019 campaign. Halfway through the season, Rennie was able to get his man and he’s slowly integrated himself into the squad, making five appearances, three of which have been starts.

The forward has managed to record only three shots, two of which he placed on target, but expect Novoa to find his form in front of the net quickly as he slowly acclimates to life with Indiana’s Team. Novoa has netted 44 times in his career as a professional and has the potential to add more against an Ottawa defense that surrendered three goals in their last match.

Midfielder Kevin Oliveira has been an integral part of the Ottawa Fury FC midfielder this season, making 27 starts in 29 appearances for his club. The Cape Verde native’s ability to transition into several different positions makes him a versatile asset, but can most commonly be found at the top of a 4-3-3, helping push his side up the field.

Oliveira only totaled 16 minutes in the loss to North Carolina FC on Saturday, meaning he will most likely start against Indy. The 23-year-old has the ability to score and create, as the forward has scored five goals and created four throughout his 2019 USL Championship campaign.

Indiana’s Team will finish a four-game, 13-day road swing Wednesday evening when the club travels across the northern border to face Ottawa Fury FC. The second meeting in three weeks’ time between the “Class of 2014” rivals kicks off at TD Place Stadium at 7:00 p.m.

Indy Eleven will finally return home next Saturday, Oct. 5, when it hosts expansion side Memphis 901 FC for a 7:00 p.m. ET contest. Tickets and full details on Indy Eleven’s “Fall Fest” themed evening at Lucas Oil Stadium – where the Boys in Blue will look to continue their club-record 23-game home undefeated streak – can be found at indyeleven.com/promotions.