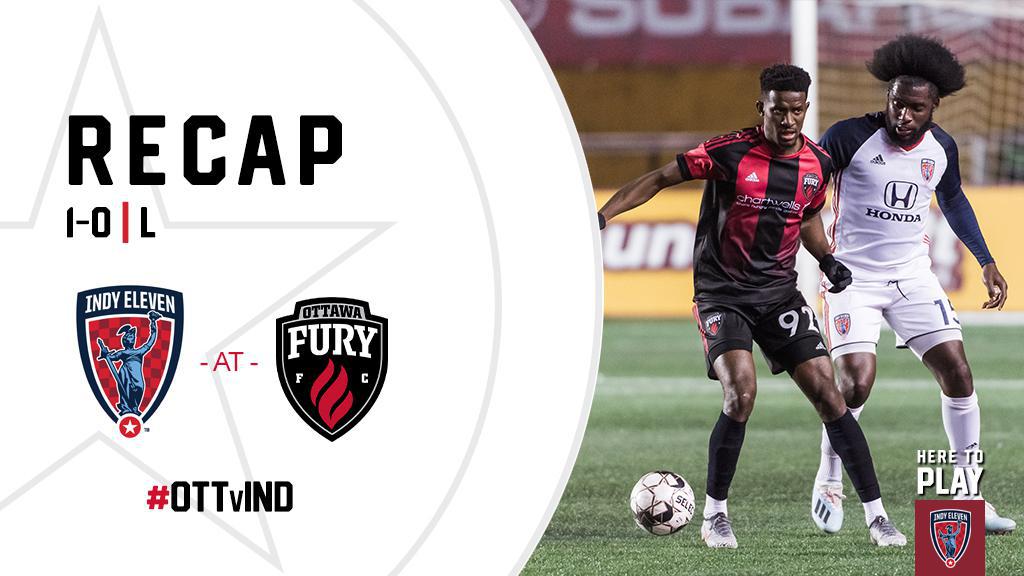 With the condensed road trip now over, the Boys in Blue are even in games played with the other four teams in competition for the top record in the Eastern Conference. With three games remaining in regular season play, Indy Eleven (17W-9L-5D, 56 pts.) sits five points behind first place Pittsburgh Riverhounds SC, but within a game of Nashville SC (58), New York Red Bulls II (57) and the Tampa Bay Rowdies (57). The top four teams in the conference will earn the right to host their first game in the upcoming USL Championship Playoffs, starting later this month.

“I felt like it was a pretty close game. In the first half, we had good possession, but it was a little too much in our own half," said Indy Eleven Head Coach Martin Rennie. "We talked at halftime about getting the ball forward a little bit quicker, being able to attack more, and I thought we started the second half really, really well. Even after the red card, I thought we were on top and managed well, created more chances and hit the post. It was a night, and a little bit recently, where things haven’t gone our way. At the same time, there’s always things we can improve upon, and we're working to fix that.

“There’s definitely some individual errors that aren’t normal, which can be partly due to concentration, which can be attributed to fatigue," Rennie continued. "What we’ve got to do now is focus on getting our form back before the playoffs. This is a chance for us to come together as a team, to stick together and to overcome things that have been rough. The schedule, the red cards – we have to use those as motivation to drive us forward to a better place.”

An Eleven foul just outside of its penalty area in the 15th minute would set up Ottawa’s opener a minute later. It was Haworth who stepped up to take the dead ball opportunity, swerving it outside the Indy wall and inside the right post to push the Canadian club in front.

The serious attacks on goal ebbed and flowed around the quarter hour marks the rest of the half, starting in the 30th minute with Ottawa midfielder Charlie Ward’s shot from 25 yards that was sent right to Newton. Two minutes later it was Indy striker Eugene Starikov looking to catch Ottawa ‘keeper Callum Irving off his line, but the Ukrainian’s floating, 40-yard effort drifted wide.

Indy Eleven midfielder Kenney Walker looked to equal Haworth’s dangerous dead ball heroics in the 45th minute, but his free kick from 30 yards out missed just wide left. In stoppage time it was Oliveira looking to draw a penalty by going down inside the area on a 50-50 challenge against Osmond, but he instead received a yellow card for simulation, marking the last action of the opening half.

It was Indy Eleven looking to press the action coming out of the locker rooms. Forward Tyler Pasher looked to serve up an equalizer on a silver platter in the 49th minute with a far post cross earmarked for Drew Conner, only to see Ottawa midfielder Thiago swoop in at the last moment to head out for a corner in front of an open net. In the 55th minute it was another Pasher service off a corner kick that found Starikov inside the six, but his header was pushed over the bar.

Indy Eleven would be hard done in the 60th minute, when Gagnon-Lapare baited Eleven captain Matt Watson into an ejection in the aftermath of a challenge right in front of the team benches. After Gagnon-Lapare wrestled Watson to the ground and landed on him, Watson was deemed to make contact to the head of the Fury FC midfielder with his elbow as he rose from the turf, which drew a straight red card from the center referee. The red card was just the third shown to the Boys in Blue during game action this season, but the second in the last four games, making their comeback effort even more challenging heading into the final half hour of the match.

That said, Indiana’s Team looked up to the challenge. Starikov looked to have evened things up in the 70th minute when he took advantage of Nana Attakora’s failed clearance inside the area and finished past Irving, but a razor-close offside call nullified the goal. A minute later it was Osmond keeping the deficit at one as he cleared Elhadji Mour Samb’s shot off the goalline.

Another blow was dealt to Indy Eleven in the 82nd minute when Newton was forced from the match due to an apparent ankle injury, suffered when he landed awkwardly after an aerial challenge with Thiago at the Indy netminder’s post. Jordan Farr would serve as Rennie’s final sub, limiting the opportunity for the Eleven sideline boss to insert one more attacking option in the game’s final stretch.

The red card and injuries resulted in a surprising eight minutes of stoppage added on. Indy’s best chance came in the 92nd minute via substitute striker Dane Kelly’s 25-yard shot that was turned away by Irving. Farr came up equally as big in the 95th minute, when he acrobatically steered Hadi Berry’s curling effort away from the far post.

"We’re going to make our way home and take a little bit of time to focus on what we need to do in the next game, get recovered and go for it," Rennie said. "It’s been a rough run on the road, so it’ll be nice to be back in front of our fans, who despite the recent result have really stuck by us and really done what you would expect from fans. We know that coming out on Saturday, we’re going to have them right behind us. That’ll give us an extra boost to get us through this spell of 10 games in just over a month. It’s important that we finish strong so we can get a little break before the next game.”

While its challenging road trip is now in the rearview mirror, the games are still coming fast for Indiana’s Team, which will finally return home this Saturday, Oct. 5, when it hosts expansion side Memphis 901 FC for a 7:00 p.m. ET contest. Tickets and full details on Indy Eleven’s “Fall Fest” themed evening at Lucas Oil Stadium – where the Boys in Blue will look to continue their club-record 23-game home undefeated streak – can be found at indyeleven.com/promotions or by calling 317-685-1100.