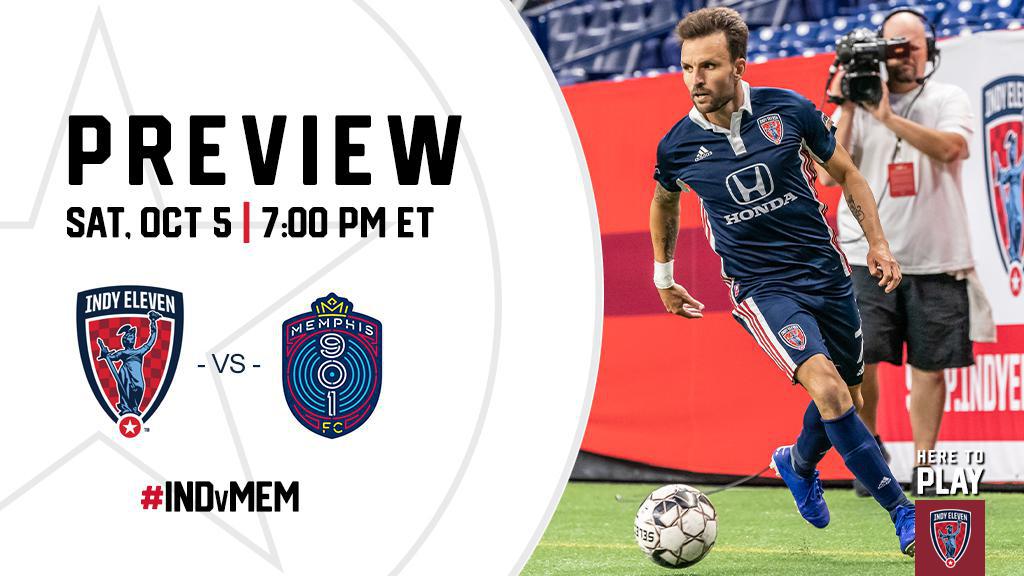 Three points came via three goals the last time the Boys in Blue faced Memphis 901 FC on the road in Tennessee. A first-half strike by former Boys in Blue Thomas Enevoldsen opened the scoring, followed by former midfielder Kim Do-heon and Tyler Pasher nabbing the second and third goals in the second stretch. Indy goaltender Jordan Farr earned his first USL Championship minutes after replacing an injured Evan Newton in the 72nd minute.

Indy Eleven ended their four-game, 13-day road trip Wednesday evening in a 1-0 loss at Ottawa Fury FC . Fury FC captain Carl Haworth delivered the game’s lone goal in the 16th minute off a free kick that left Indy ‘keeper Evan Newton stranded between the posts. The Boys in Blue nearly drew level after striking the post in the second half and a long-distance attempt in stoppage time, but were unable to change the score line.

A dominant performance from Memphis 901 FC saw the Tennessee based club put five goals past Bethlehem Steel FC last Saturday. Goals from Elliot Collier and Marcus Epps and a brace from Brandon Allen generated the hefty lead in the first half with Liam Doyle rubbing salt in the wounds in the second half adding the fifth. The victory was Memphis’ fourth in the last five matches, as the side strives to finish its inaugural season with a playoff berth.

The 33-year-old has been a staple on the left side of Head Coach Martin Rennie’s lineup over the last two seasons, and the Spaniard’s engine is still running strong. He’s appeared in 26 of Indy’s 31 games in 2019, starting 25 of those, but will most likely face Memphis 901 FC for the first time on Saturday night.

Ayoze’s ability to score a goal isn’t the only thing that makes him dangerous on the pitch, it’s also his ability to create chances for his teammates.. He’s played the most key passes for the Boys in Blue by a country mile, registering 75 opportunities, the fourth most in the Eastern Conference. That is a staggering 32 more chances than Tyler Pasher, who’s created the second most (43). A statistic that should have fans excited for Ayoze’s return to the starting XI after missing Wednesday’s match due to yellow card accumulation.

Memphis 901 FC Brandon Allen added two more goals to his season haul in his side’s last match against Bethlehem Steel FC. The brace against Bethlehem brings his tally to nine goals in 24 appearances, seeing the forward sit atop the Memphis goal scoring chart, three ahead of fellow forward Elliot Collier.

The 25-year-old forward has been on a good run of form in front of net in the last six matches, scoring five goals during the stretch. Allen has been accurate in front of goal, converting 30% of his attempts, scoring nine of the 30 shots he’s taken in 2019. His next task is to break down a defense that doesn’t give up many goals at home in Indy Eleven.

Indiana’s Team  finally returns home this Saturday, Oct. 5, when it hosts expansion side Memphis 901 FC for a 7:00 p.m. ET contest. Tickets and full details on Indy Eleven’s “Fall Fest” themed evening at Lucas Oil Stadium – where the Boys in Blue will look to continue their club-record 23-game home undefeated streak – can be found at indyeleven.com/promotions or by calling 317-685-1100.