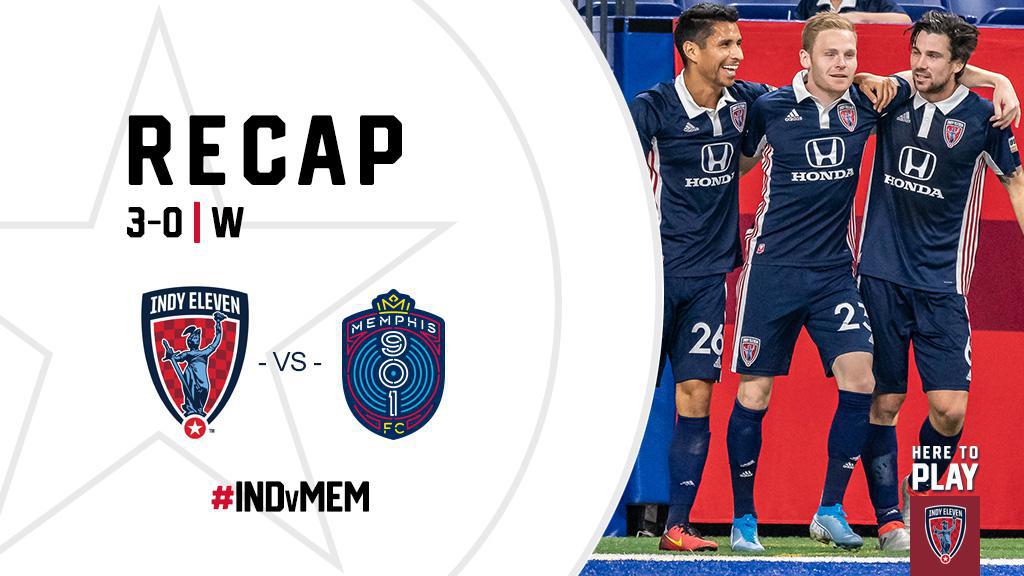 An energized home crowd and some early goals provided the spark Indy Eleven needed to cruise to a 3-0 win over Memphis 901 FC in front of 13,134 fans at Lucas Oil Stadium.

With this weekend's results, Indy Eleven now controls its own destiny regarding home-field advantage for at least its first USL Championship Playoffs contest later this month. The top four teams in each conference will host games in the single-elimination postseason tournament the weekend of Oct. 25-27.

As opposed to its usual late-game dramatics, Indy Eleven tonight took away most doubt by the middle of the first half courtesy of forward Cristian Novoa and defender Karl Ouimette, while Tyler Pasher provided the final tally off the bench in the second half.

“I think that the key point was making sure that intensity was very high from the beginning of the game, because if you start slow it would be very hard to up the tempo,” said Indy Eleven Head Coach Martin Rennie. “If you start fast you might be able to recover or take it easy later on, and that’s what happened.”

Second-year goalkeeper Jordan Farr made his first start since late July in place of the injured Evan Newton and collected three saves en route to his third shutout in five starts this season. The clean sheet was Indy's 11th in 16 home games and 13th overall in USL Championship action, making it the second stingiest defense in the 36-team league.

Indy Eleven’s first goal in three games came in the 13th minute via an Ayoze corner kick. The Spaniard’s in-swinger connected first with the head of forward Dane Kelly, who flicked the ball to the back post to a lurking Novoa. The Venezuelan dipped low to nod the ball behind 901 FC ‘keeper Jeff Caldwell and into the net, opening his Indy Eleven scoring account and gifting the Boys in Blue a 1-0 lead.

Ayoze played provider again nine minutes later, when Indiana’s Team doubled its lead. Ayoze whipped in a left-footed cross to the near post that connected with the head of defender Karl Ouimette, leaving Caldwell stranded as the ball swung to the far post to put the Boys in Blue well on pace towards extending its club-record home undefeated streak – and the fourth such longest in USL Championship annals.

Novoa nearly doubled his tally in the 33rd minute after an early cross from midfielder Drew Conner connected with the Venezuelan at the top of the Memphis box, but his header drifted just inches wide left of the goal. Kelly nearly added a third in stoppage time of the first half. After gracefully shielding off a Memphis defender from a lofted ball in the Memphis 18-yard box the Jamaican found himself 1-on-1 with Caldwell. Unfortunately, Kelly pushed his shot just wide as Indiana’s Team took a 2-0 lead into the locker room.

The first clear chance of the second half came at the hour mark when Farr was forced into a diving save, the Eleven’s birthday boy pushing away Memphis forward Marcus Epps.

“It was a need tonight, to get three points. The clean sheet is an added bonus, but right now the boys needed a win and we were just chomping at the bit to get home,” Farr said after the match.  “Being here, in front of this crowd, probably the most we’ve had since the opening night, is just perfect.  We honestly, literally, right now can’t do it without the (Brickyard Battalion). This was much needed and refreshing for all the boys.”

Indy added another insurance tally through the substitute Pasher in the 77th minute, the Canadian scoring his team-high 11th goal of the campaign. Defender Paddy Barrett blasted a long ball over the top of the 901 FC backline that landed at the feet of the pacey winger. Pasher then carried the ball into the right side of the six-yard box before placing the ball between Caldwell’s legs and into the back of the net, sealing one of the Eleven’s most dominant performances of its best regular season to date. Pasher’s goal was the last meaningful action of the match, which improved the Eleven’s home ledger to 12W-0L-4D and a goal differential of +19 (24 goal for, 5 goals allowed).

“I think our players were still very confident, and I think coming home helped a lot. Our fans really get behind us and make a lot of noise, they really make a difference to how the players feel, and that showed right from the beginning tonight,” Rennie said. “So it was a great win and I think it really showed the character of the players, it shows their determination, their hunger. Now we need to get a little break and move on and really do well for the rest of the season.”

Indy Eleven will close out its regular season slate over the next two weeks, starting with a huge top-five match-up next Saturday, Oct. 12, at the Tampa Bay Rowdies (7:30 p.m. ET, live on WISH-TV 8 and ESPN+). Indiana’s Team returns home for its season finale on Wednesday, Oct. 16, when it plays host to Swope Park Rangers at 7:00 p.m. Tickets for the Fan Appreciation Night celebration, presented by Community Health Foundation, are available starting at $15 at IndyEleven.com/tickets or by calling 317-685-1100.