Boys In Blue Head to St. Petersburg for Final Regular Season Away Contest 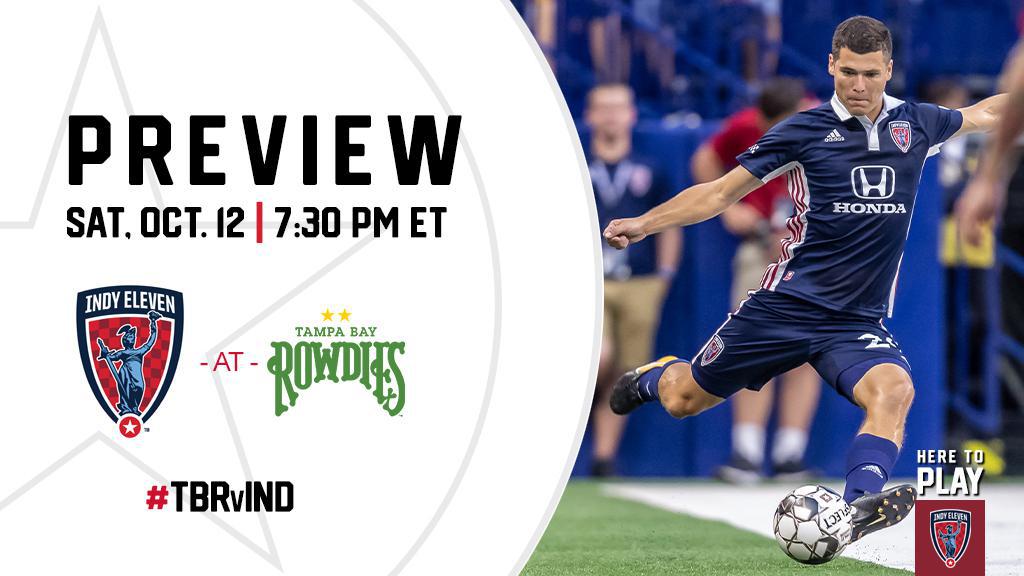 The first meeting between age-old rivals ended in a stalemate in Week 9 of the USL Championship season. The Boys in Blue put on a sturdy defense display and kept the Rowdies from registering a single shot on goal after an early red card forced defender Paddy Barrett from the match. Indy secured a point from the shutout and kept the club’s home undefeated streak alive.

Indiana’s Team extended its home undefeated streak to 24 games after a 3-0 win against Memphis 901 FC. Indy forward Cristian Novoa netted his first goal since joining the team in August in the 13th minute, with midfielder Dane Kelly recording his fourth assist in the process. Two additional goals from defender Karl Ouimette and midfielder Tyler Pasher helped Indy leapfrog to second place in the Eastern Conference.

Tampa Bay Rowdies road record dropped to 8W-4L-4D after a 2-0 loss to 14th-place Loudoun United FC. Two second-half goals from Loudoun’s Alioune Ndour and Gordon Wild were enough to hand the Rowdies their seventh loss in 2019, keeping the race for a top four finish in the Eastern Conference tight heading into the last final two games of the regular season.

Karl Ouimette’s performance against Memphis 901 FC at home last Saturday was enough to secure a bench spot on USL Championship’s Team of the Week. The defender contributed on both ends of the pitch, putting up stellar defensive numbers and scoring the second goal of Saturday’s contest, his second of the season.

The Canadian was a wall in the back third, racking up the most clearances and tackles of the game with five and four, respectively, and helped lead Indy to its 13th clean sheet on the season. Ouimette brings peace of mind to teammates when in the backline according to captain Matt Watson, who has played in front of the 27-year-old for the majority of the season.

Indy’s defense will need to be at its best come Saturday night, when Rowdies forward Sebastian Guenzatti comes to town. The 28-year-old is in the thick of a breakout season, currently leading the scoring charge for the Floridian team with a franchise record-breaking 17 goals. Guenzatti, the Eastern Conference’s second highest goal scorer, sits just four goals off the top spot in the league-wide Golden Boot race, raising the stakes for the striker ahead of the final two matches of the regular season.

Guenzatti registered four of Rowdies’ 14 shots against Indy at Lucas Oil Stadium on May 1, but like the rest of his teammates, was unable to test Eleven ‘keeper Evan Newton with an on-target attempt.

The pressure to create in front of net by Guenzatti has the potential to increase on Saturday night with the possibility of the Rowdies being without midfielder Dominic Oduro and runner-up goal scorer Juan Tejada. Oduro was subbed off 25 minutes into Tampa’s previous game against Loudoun. The 22-year-old Tejada, who has scored 10 goals in 2019, was subbed off at halftime two matches ago against Louisville City FC and has not clocked in any playing time since. Guenzatti will need to find form after struggling to put a single shot on frame against Loudoun United FC, as he faces the second-best defense in the East in Indy.

Indy Eleven will close out its regular season slate over the next two matches, starting with a huge top-five fixture this Saturday at the Tampa Bay Rowdies.  The action begins at 7:30 p.m. ET and will be live locally on MyINDY-TV 23 and online via ESPN+.

After this Saturday’s crucial top-five clash at Tampa Bay, Indy Eleven will close out its sixth and most successful regular season in club history this Wednesday, Oct. 16, against Swope Park Rangers, at Lucas Oil Stadium. Kickoff for Fan Appreciation Night, presented by Community Health Network Foundation, is set for 7:00 p.m. (live on ESPN+ and MyINDY-TV 23). Tickets remain available for as little as $15 by visiting indyeleven.com/tickets or by calling 317-685-1100.