RECAP | ELEVEN COME BACK TO EARN POINT AT ROWDIES 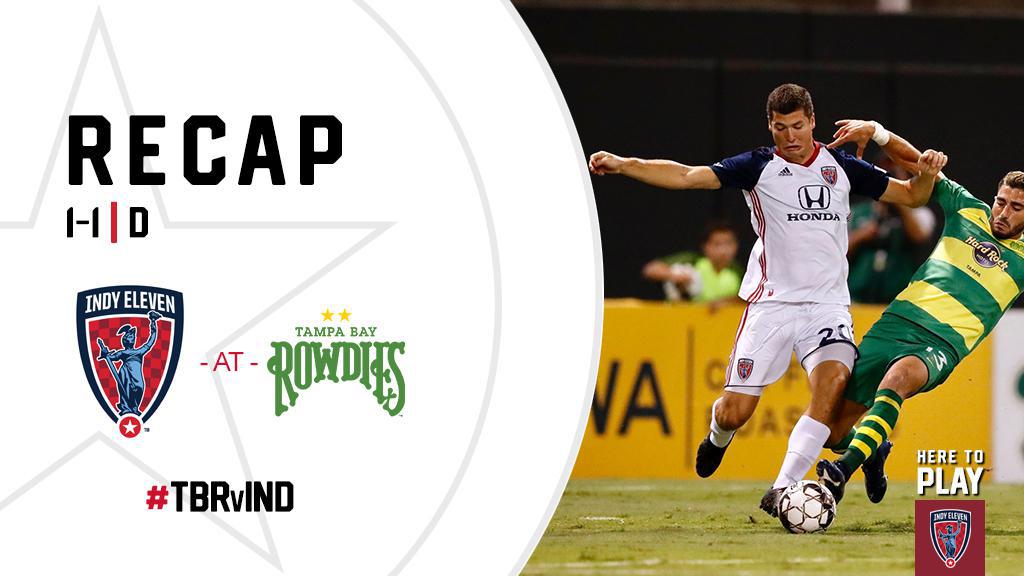 The tie kept Indy Eleven (18W-9L-6D, 60 pts.) in third place in the Eastern Conference standings – and also in the drivers’ seat for a home debut in the USL Championship Playoffs. With the top four teams in each conference earns a home debut in postseason play during the weekend of Oct. 25-27, and Indy can guarantee that with a win in Wednesday’s regular season finale at home against Swope Park Rangers. Indy Eleven would have to be passed by fourth place Tampa Bay (58 pts., one game remaining) and fifth place New York Red Bulls II (57 pts., two games remaining) in order to begin the playoffs on the road.

“I think we show a lot of effort and a lot of character. Sometimes on the road we’ve been a little too open and too expansive, but tonight we were more solid and stayed in the game and that allowed us to fight back,” said Indy Eleven Head Coach Martin Rennie. “Our guys really showed great character out there, and that’s an important trait to have in our locker room as we go into the playoffs.”

The game started with Tampa Bay holding the lion’s share of possession, but neither team truly threatened goal until the 14th minute. Rowdies midfielder Leo Fernandes deflected a short cross at the left post across frame, only to see Indy Eleven goalkeeper Jordan Farr alertly pounce on the ball. Fernandes was involved again in the 18th minute, when his looping ball from right on the endline ricocheted off the far right post and back into the six-yard box, where forward Sebastian Guenzatti skied the rebound opportunity. Fernandes somehow clipped his shot off just after suffering a non-contact leg injury that would force him from the contest minutes later.

Farr would get busier in the 29th minute, making back-to-back saves on shots from the edge of the area by Lucky Mkosana and Guenzatti. A minute later it was Rowdies midfielder Malik Johnson lashing a shot from 20 yards, but Farr was able to watch the dipping ball through traffic and did well steer it around his left post for a corner. Farr got some help in keeping the game scoreless in the 36th minute, when Barrett initially stopped Gunenzatti’s redirect inside the six, stopping the ball with his chest before Ayoze swept away the ball after it glanced off the post.

Barrett was again in the spotlight during five minutes of stoppage time, starting in the 48th minute when he headed another shot, this time Andrew Tinari’s bending ball, away from the upper right corner. A minute later Barrett slid in to deflect Mkosana’s cutback from the endline, and while the ball made contact with the Indy captain’s arm as part of the natural motion of his slide, the referee pointed to the penalty spot regardless. Guenzatti’s conversion of the PK would mark the last action of the half, sending Indy to the locker room feeling hard done by and down 1-0.

“I think that was a big moment. Five minutes of stoppage time was too much for one injury, and it was really a harsh, harsh call on the penalty,” Rennie stated. “We were really looking to be in a solid position going into the half at nil-nil, and we knew we could bring on players like [Tyler] Pasher, [Matt] Watson and others in the second half to give us a chance to get going. In the end we still managed to do that, but that meant it ended up in a tie rather than the win we were looking for.”

After making three key stops in the first half, Farr picked up where he left off 30 seconds into the second stanza, leaping fully to tip Kwadwo Poku’s shot from 20 yards over his crossbar. In the 49th minute Tampa Bay was unlucky not to double the lead, as Afrim Taku skied a free look from eight yards out over the frame.

While the match consisted of largely one-way traffic towards the Indy final third through the first hour, that began to change in the 58th minute with Cristian Novoa’s shot from distance that forced Rowdies ‘keeper John McCarthy into his first save of the evening. That was followed shortly by the 60th minute insertion of Pasher and Watson into the Eleven lineup, which provided fresh legs and a renewed energy in attack.

While Indiana’s Team was still absorbing pressure across the next ten minutes, it also gained more meaningful possession in the attacking half of the field – although it was a lightning fast counter that resulted in an equalizer in the 72nd minute. Defender Mitch Osmond made a crucial step-through to intercept a pass in the center circle before sprinting 40 yards straight up route 1 to take the space in front of him. A clever through ball at the penalty arc put Pasher into the left side of the area, and his first-time cross to the six found Kelly in stride for a smooth finish that evened the proceedings.

Indy Eleven kept pressing in the 76th minute, with Novoa sending a header off a Tyler Gibson cross over the bar from 12 yards out. It was Barrett making one more key intervention a minute later, his recovery run and sliding challenge beating Mkosona’s run to the near post for Taku’s cross. The Indy defensive effort continued, with a lengthy run by Gibson ending in a block of Guenzatti’s last go on goal of the match in the 84th minute. That would mark the last quality look for either side through regulation and three minutes of stoppage, forcing a share of the spoils from the pivotal contest for both sides.

“I think it was a good result and an important point from a difficult game on the road, putting us in a good position going into Wednesday,” Rennie said. “It means that the top four is within our own hands, giving us a chance to get us a home playoff game provided we do well in the finale this week, so it was a good result overall.”

Indy Eleven will close out its record-setting regular season this Wednesday, Oct. 16, when it plays host to Swope Park Rangers at 7:00 p.m. Tickets for the Fan Appreciation Night celebration, presented by Community Health Network Foundation, are available starting at $15 at IndyEleven.com/tickets or by calling 317-685-1100.