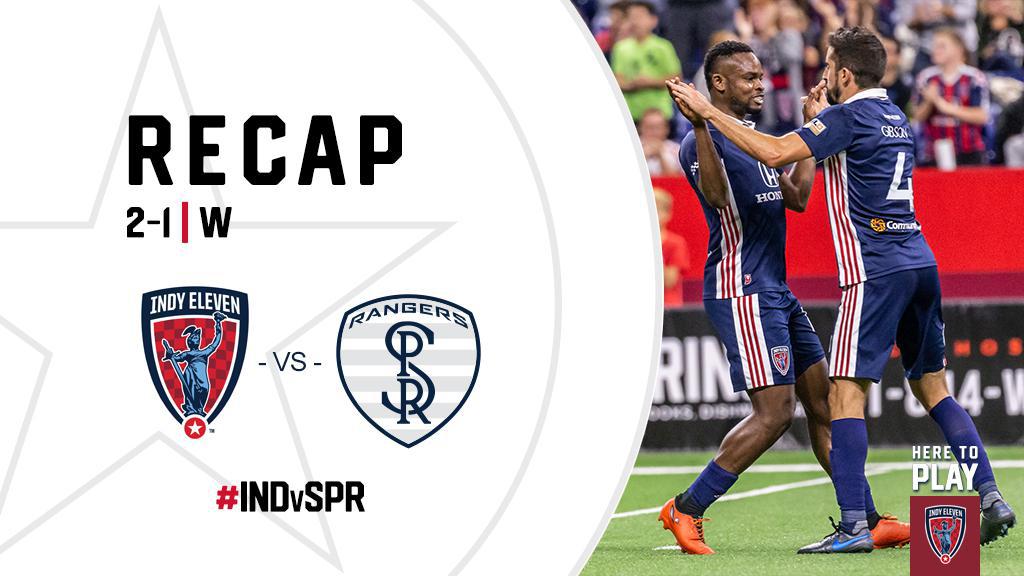 The victory, Indy's seventh straight at home, not only capped the team's most successful regular season on a winning note, but also secured a top four finish in the USL Championship's Eastern Conference - and the home Quarterfinal Round game that comes with it.

Indy Eleven, which will finish the regular season in third place in the 18-team conference, will play host to one of the troika of the Tampa Bay Rowdies (58 points), New York Red Bulls II (57 pts), or Louisville City FC (57 pts.), with this Saturday's slate featuring those teams determining the foe.

“I think that the crowd are even more of a factor in that stadium,” said Indy Eleven head coach Martin Rennie. “I think it’ll be a really hectic atmosphere and I think that will be a big positive for us. I think it’s going to be a great opportunity for us. Playing at Lucas Oil Stadium, it was something that we felt we could make a home-field advantage – and we have. So we need to do that at Carroll [Stadium] as well.”

Despite Swope Park's struggles this season, the Kansas-based side made Indiana's Team work for the full three points tonight. After a physical first half, Kelly put the Eleven up in the 56th minute, but Rangers countered quickly through Wilson Harris just a minute later. Kelly would stamp his mark on the match with a gutsy effort in the 67th minute, taking a hard knock just after touching his shot past former Butler goalkeeper Eric Dick in the SPR goal for his 10th of the season.

Indy Eleven finished its 2019 home campaign undefeated with a 13W-0L-4D record and pushed its unbeaten streak at the corner of Capitol & South to 25 games dating back to last July.

A physical first half saw the two teams combine for more yellow cards (5) than shots on goal (4). Indy Eleven nearly struck first just under the quarter-hour mark when Kelly rocketed a header off the crossbar. A whipped in cross from the foot of defender Ayoze connected with the Jamaican on the penalty spot, but luck favored Swope as his effort was denied by the woodwork.

Ayoze looked to assist again 10 minutes later after stealing the ball just outside the Swope Park 18-yard box. The Spaniard slipped in forward Cristian Novoa, who took a touch in stride and attempted to place the ball past goalkeeper Eric Dick, but the Butler University alumnus ultimately denied the Venezuelan’s chance. Indy’s offensive tempo continued to flow through the Spanish maestro as he played yet another key pass in the 34th minute, this time through defender Mitchell Osmond, but his header ended wide of the goal.

Indy goalkeeper Jordan Farr made sure the sides went into the locker rooms even after saving Swope Park defender Rennico Clarke’s open header from a corner kick in the third minute of first half stoppage time. Despite a first half that saw Indiana’s Team control 63% possession, both sides were unable to break the deadlock.

Ayoze would finally help crack the egg 11 minutes into the second half, a cross from his smooth left foot connecting with Kelly on Swope’s penalty mark. The USL Championship’s all-time leading goal scorer adjusted in the air to redirect into the bottom-left corner, garnering a 1-nil lead for the Boys in Blue. The advantage was short-lived, however, after Swope Park would draw level a minute later in the 57th minute via a header from Harris on the doorstep off Ethan Vanacore-Decker’s clipped cross from the endline.

Indy Eleven edged back into the lead ten minutes later. A quick one-two play between Kelly and midfielder Kenney Walker played the Jamaican attacker into the Swope Park box before dinking the ball past Dick – and absorbing a heavy challenge from the SPR ‘keeper in the aftermath of the shot. The Boys in Blue went on to create a few more decent looks from distance in the final 20 minutes of the match, mostly coming from midfielder Tyler Pasher, but the score line would remain 2-1 in favor of Indiana’s Team at the final whistle.