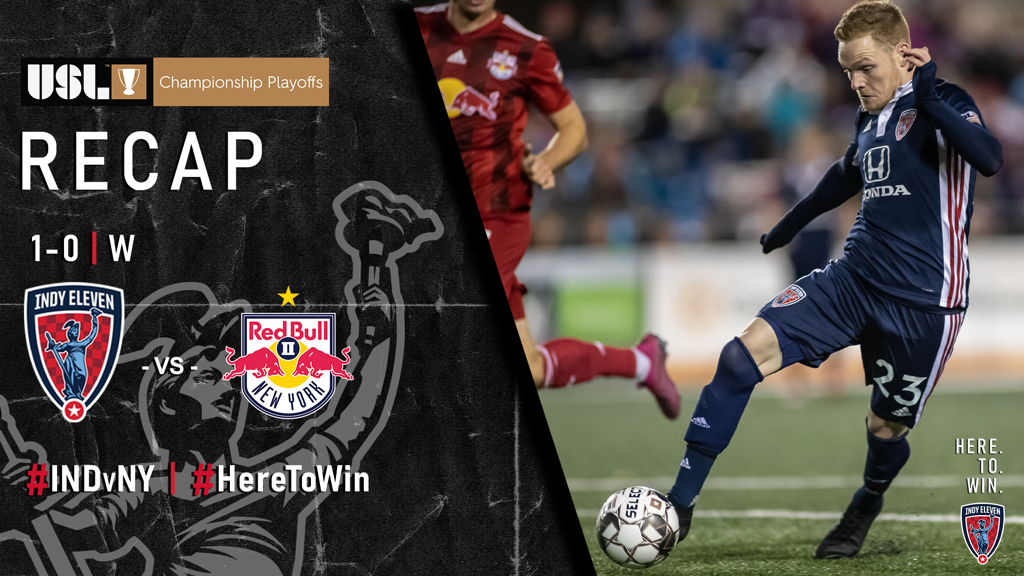 Indy Eleven leaned on its trademark stout defense in tonight’s USL Championship Playoffs opener against New York Red Bulls II, so fittingly it was a goal by defender Karl Ouimette that made the ultimate difference in a 1-0 victory in the Eastern Conference Quarterfinal showdown.

The victory for the #3 seed Indy Eleven in its return to IUPUI Carroll Stadium set up an away fixture in the Conference Semifinal round next weekend at #2 seed Nashville SC, which defeated Charleston Battery 3-1 this evening. The date and time for next weekend’s match is still to be announced.

“It wasn’t really one guy, and that’s how it needs to be in the playoffs,” said Indy Eleven Head Coach Martin Rennie. “The guys who came on did well. They replaced guys who put everything into the game. Everyone did their job and did it well. A clean sheet and goal for a defender was fun.”

In a tightly played contest, it was a stroke of brilliance by Ouimette in the 27th minute that moved

the scoreboard, his sidewinding effort set up by a smooth touch by midfielder Macca King squeezing just inside the far left post past diving Red Bulls II goalkeeper Evan Louro. Indy Eleven ‘keeper Jordan Farr made two saves on the evening, none more important than his stop on Sean Nealis’ header from close range in the 88th minute.

Both squads came out with plenty of energy, but also looked to feel out not only each other, but the Carroll Stadium turf that was foreign to the participants. The 27th minute goal was set up at midfield by defender Paddy Barrett’s pinpoint, slicing diagonal to King, whose fourth assist of the season set up Ouimette’s volley, his third goal of the season and his first using his feet in two seasons with the squad.

The first 10 minutes of the second half were just as difficult when it came to creating looks towards frame. As a result, both sides worked to make the most out of set pieces, a Red Bulls II corner in the 50th minute being squandered while Indy defender Ayoze saw his free kick five minutes later seeking danger but finishing over the endline.

Pressure from the Boys in Blue nearly paid in the 70th minute. After a pair of enticing back-to-back corners from Indy, Kelly took a crack at a clean look on goal, but the Jamaican’s left-footed strike from just outside the box carried over the crossbar.

Six minutes later, Indy midfielder Tyler Pasher nearly “cued the smoke” after a ball played in freed the Canadian inside the box. Despite his speed, NYRBII goalkeeper Evan Louro was quick off his line to deny Indy’s goal leader in 2019 an opportunity.

Red Bulls II created its best chance of the match in the 88th minute, again from a corner kick. New York defender Jordan Nealis got his head on the end of a ball played to the penalty spot, but Indy ‘keeper Jordan Farr collected the effort as he looked to record his first playoff clean sheet.

New York would not seriously threaten during four minutes of stoppage time, resulting in Indy Eleven walking away with a playoff win for the second time in six seasons, and its first time since November 5, 2016, also at “The Mike.”

“Really happy. I think that is the overwhelming emotion. All of our fans celebrated and seeing what it means to them was really fun. It’s fun to win big games. You notice how much it means for the organization,” stated Rennie.