Boys In Blue Aim for First Postseason Away Win 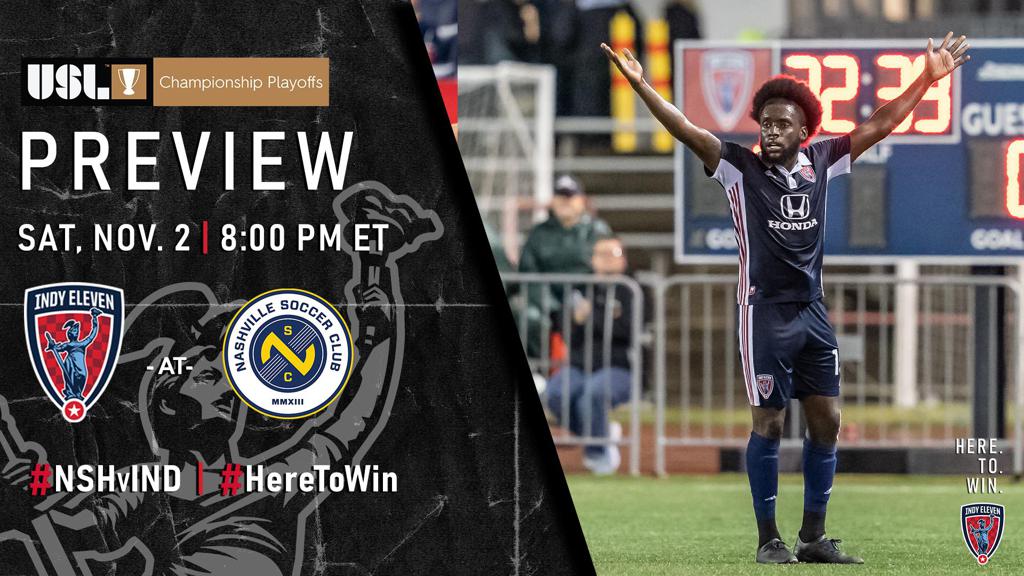 A nil-nil draw within the walls of Lucas Oil Stadium was the end result of the first 2019 USL regular season matchup on May 25. Along with dominating possession nearly 60-40 and outshooting Nashville 12-8, the Boys in Blue nabbed their fifth clean sheet in as many games from the third all-time meeting between the two sides.

A pair of first-half goals were enough to hand Indy Eleven its first-ever defeat against Nashville SC. Indy nearly took an early lead through the foot of forward Alioune Diakhate, but recently-crowned 2019 USL Championship Golden Glove winner Matt Pickens made the crucial save that kept Indiana’s Team off the scoreboard. It wasn’t long before Nashville’s Daniel Rios and Alan Winn made their mark on the evening, scoring the game’s only goals in the 24th and 42nd minutes, respectively. Before the defeat, the Boys in Blue held an all-time record of 2W-0L-1D and a +3 goal differential against their Music City foes.

Indy Eleven recorded its first USL Championship Playoffs win, and first postseason victory since November 5, 2016, after defeating New York 1-nil on a gusty night at Michael A. Carroll Stadium. The return to “The Mike” featured a stunning volley from defender Karl Ouimette in the 27th minute, which proved enough to advance out of the Eastern Conference Quarterfinal round. Goalkeeper Jordan Farr recorded his fourth clean sheet of 2019 in his postseason debut, which helped extend Indy’s home unbeaten home streak in all competitions to 27 games.

A trio of goals, two in the first half and one in the second, saw Nashville advance to the 2019 USL Championship Eastern Conference semifinals after topping Charleston Battery last Saturday. Nashville gained the lead out of the gate courtesy of midfielder Lebo Meloto’s goal in the ninth minute, only to see Charleston draw level from the spot 26 minutes later. Goals from Nashville’s leading goal scorer in Daniel Rios and substitute Derrick Jones extinguished hopes of a late-game comeback from Charleston, pushing the Music City side into the Final 8.

There’s an age-old saying that claims defense wins championships. If true, Indy Eleven is in good shape after racking up the best defensive year in club history and allowing the second fewest goals in the USL Championship with 29 goals allowed. One of the most integral parts of the Boys in Blue defense lies in left-sided cog Neveal Hackshaw.

Despite being only 24-years old, the Trinidad & Tobago international plays with the mentality of a veteran defender. Hackshaw can typically be found lining up on the left side of Indy Eleven Head Coach Martin Rennie’s 3-back system, a position that well suits his defensive astuteness and creativity on the ball. He displayed his strength and intelligence last weekend against Red Bulls II, repeatedly using his frame to shield attackers off the ball, allowing Indy to keep shots to a minimum and control the flow of the game for much of the match. Hackshaw also showcased his ability to play out of the back and to release teammate Ayoze while shoring up the left flank, and doing so again on Saturday will allow the Spaniard to push forward into more attacking opportunities, which Indy will need to create chances against the stingy Nashville defense.

Pickens has the luxury of being able to rely on a stifling defense, as well – but don’t discount the 37-year-old’s role in organizing the unit in front of him. His side is the only team in USL Championship that allowed less goals than Indy, finishing 2019 with 27 concessions. Pickens isn’t tested often, as shown against Charleston Battery where he didn’t have to make a single save in the run of play and saw his only shot faced come from the penalty spot. However, the Golden Glove recipient can step up to the occasion when necessary, as he made 63 saves on 80 shots faced this season.