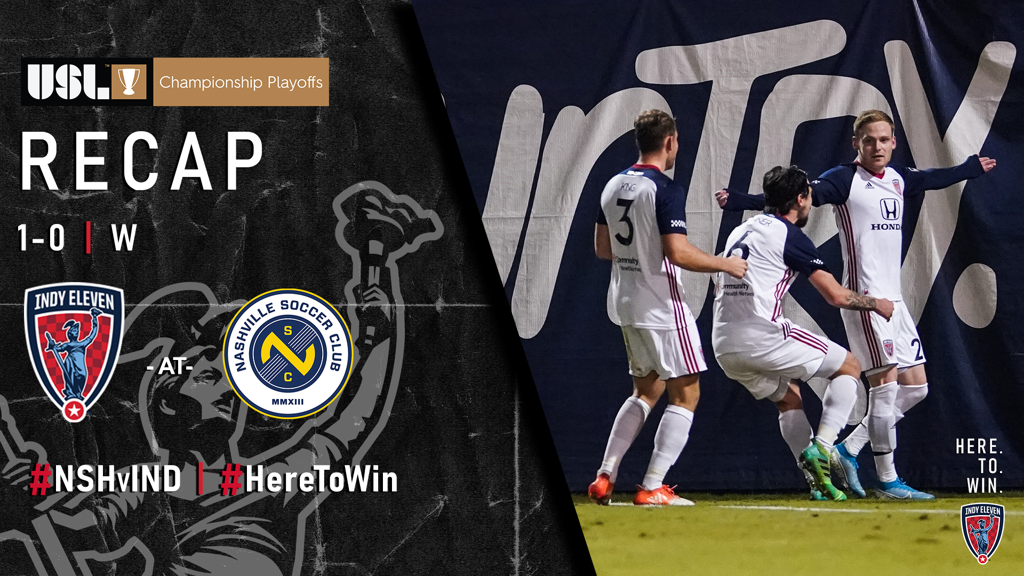 Indy Eleven forward Tyler Pasher's goal just inside the hour mark and a second straight shutout helped Indy Eleven advance past Nashville SC 1-0 in their Eastern Conference Semifinal showdown at First Tennessee Park. Indy Eleven put together one of its most composed away efforts of the season at the biggest time possible, calmly controlling the run of play and having the bulk of the chances until Pasher's breakthrough finally came in the 59th minute.

Indy Eleven Season Ticket Members can already save their seats for next Saturday's Eastern Conference Final via an exclusive on-sale opportunity, while tickets will go on sale to the public Monday at noon via indyeleven.com/tickets and by phone at 317-685-1100.

“It’s really exciting for the club ... it’s going to be a fantastic occasion,” said Indy Eleven Head Coach Martin Rennie of next weekend’s match-up. “Two really good teams, two close, local rivals. Two of the best teams in the country outside of MLS playing against each other for the right to host the league final. It will be a fantastic day at Carroll Stadium.”

It was Indiana’s Team that controlled the first half, using high defensive pressure, calm possession, and a steady stream of corner kicks to keep Nashville back on its heels. The pressure nearly paid off in the 20th minute on a flurry of chances, starting with Pasher’s cross from the left that was spilled by Nashville SC goalkeeper Matt Pickers and just missed an onrushing Dane Kelly deep inside the area. Thirty seconds later it was another Pasher cross that drew calls for a handball when it ricocheted off center back Jimmy Ockford inside the area, followed shortly thereafter by a lash by Indy midfielder Kenney Walker that again forced Pickens into action.

The action got heated a minute later when Eleven defender Ayoze stopped Alan Winn’s run up the middle of the field with a tackle from behind that resulted in pushing and shoving by both teams and yellow cards for Ayoze, Indy defender Karl Ouimette and Nashville midfielder Taylor Washington.

The rest of the half would see the teams trade shots at goal that were handled relatively easy by Pickens and his opposite number in the Eleven goal, Jordan Farr. Pickens would stop efforts from within the area by Kelly, Pasher and defender Paddy Barrett, while Winn served as Farr’s nemesis on net, stopping one chance and watching another come perilously close to his right post.

“I thought we played really well tonight. We possessed the ball with a lot of composure and played in their half a lot, especially in the first 25 to 30 minutes, which was important because that allowed us to settle into the game,” explained Rennie. “We had a few corners and opportunities around the goal, quite a few decent shots that [Nashville goalkeeper Matt] Pickens made some good saves on.”

Farr would be forced into his best stop of the night just minutes into the second half, going low to his right to bat away forward Daniel Rios’ dangerous sidewinder from the penalty spot. It took until the 59th minute for another quality chance to come to pass, and this time Pasher would not pass it up. The Canadian striker would notch his team-leading 12th goal of the campaign with a first-time, half-volley touch that put Tennessee native Tyler Gibson’s pinpoint ball over the top of the backline inside the left post, giving the Boys in Blue a deserved advantage heading into the final half hour.

From there on out Nashville would wrestle control of the possession, but Indy absorbed the pressure well, allowing mostly half chances that struggled to make it through Indy’s increased numbers inside the penalty area. The hosts thought their moment to equalize had come in the 90th minute when defender Justin Davis tapped home Matt LaGrassa’s ball deep into the six-yard area, but the assistant referee’s flag was immediately – and correctly – raised to deem the play offside, allowing Indy Eleven to breathe easily and hold on for the massive result.

“In the second half I thought we continued to play well. We got a great goal – great run, great pass over the back line and ended with a good finish,” Rennie said. “We continued to do pretty well on the ball after that and then in the last five minutes we had to really defend a few balls around the box. I thought we handled it all really well to give ourselves a great win. One of the great nights of Indy Eleven’s history, and we’re proud to be a part of it.”