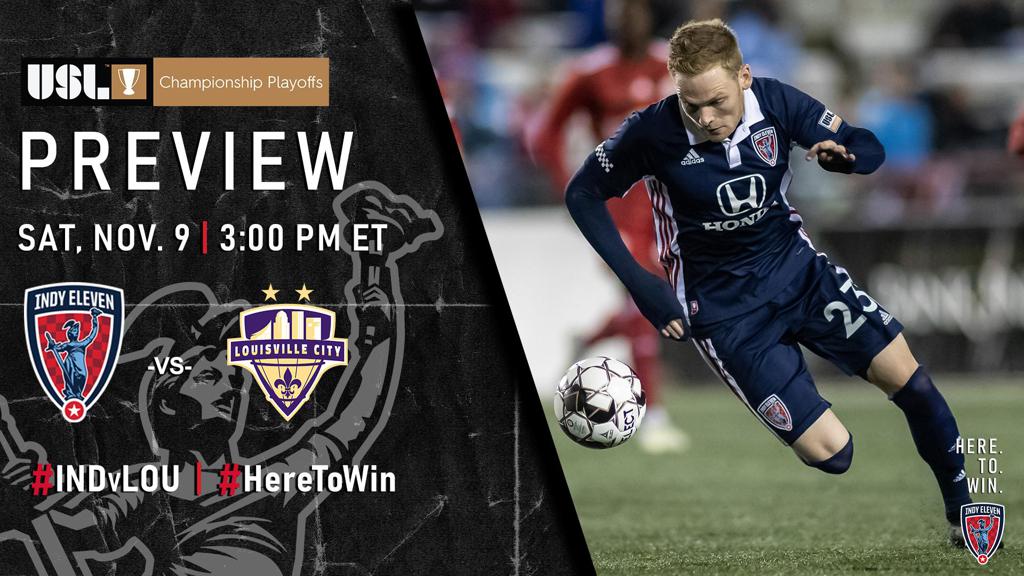 Despite a two-month gap and a venue change, the score line remained the same after the final whistle of the latter 2019 LIPAFC match-up on a Friday night in Louisville. Pasher netted for the second time in as many games against Lou City, this time in the 43rd minute. The lead lasted 27 minutes before Louisville’s Abdou Mbacke Thiam brought the score – and season series – even.

The Boys in Blue recorded their second consecutive USL Championship Playoffs clean sheet and advanced to the Eastern Conference Final after a 1-nil Semifinal victory in Nashville. A majestic goal by Tyler Pasher off an equally impressive assist from Tyler Gibson in the 59th minute was enough to spur the Boys in Blue to victory, moving Indiana’s Team to the cusp of the USL Championship Final.

Pittsburgh Riverhounds SC’s postseason run ended in heartbreak after falling at Highmark Stadium for the first time in 26 games last Saturday against fourth-seed Louisville City FC in added extra time. Pittsburgh’s lead after 11 minutes was cut short after Louisville hopped on the comeback trail and leveled the game in the 51st minute through Luke Spencer. Louisville avoided the stress of penalty kicks after netting the game-winner with two minutes left in extra time, when captain Paolo DelPiccolo headed home the goal that sent Louisville to their fifth consecutive Eastern Conference Final.

Tyler Pasher loves him a game against Louisville City FC, proven by the Canadian having scored both of Indy’s goals against the Boys in Purple in 2019. Pasher went on a scoring streak during the middle of the 2019 USL Championship season that helped the 25-year-old finish the regular season with a team-high 11 goals to his name – and he added one pivotal one for good measure in last weekend’s triumph in Nashville.

Pasher’s not only been a consistent goal scorer throughout the season, he’s been a crucial scorer as well. The pacey winger has scored six of his 11 goals after the 70th minute. Four of those six have come in the last 10 minutes of matches and three have been game-winning goals. Thanks to those tallies, Pasher is one of four Boys in Blue to put up double-digit goals in a single season, joining the likes of teammate Dane Kelly and former strikers Eamon Zayed and Jack McInerney.

Paolo DelPiccolo came into the second half of the Eastern Conference Semifinal at Pittsburgh with five minutes left in regular time. He made his limited time in the game count, the midfielder scoring the winning goal just two minutes before the match would move to kicks from the penalty spot. DelPiccolo hasn’t been the most consistent member of the Louisville City FC lineup, making 15 appearances over the 34-game season, but the captain has been there when his club needed a goal, most recently against Pittsburgh.

The 28-year-old provided the same type of impact in the first LIPAFC fixture of the year. The midfielder took advantage of a free kick opportunity and placed the ball into the goal like a postage stamp on an envelope, scoring the first USL Championship goal against Indy goalkeeper Jordan Farr. One area that has plagued the Boys in Blue at times is committing fouls around the penalty area that have resulted in free kick opportunities, the likes of which teams like Louisville – and players like DelPiccolo – can capitalize on. You may not see him early on Saturday, but you’ll assuredly see him impact the match at some point.