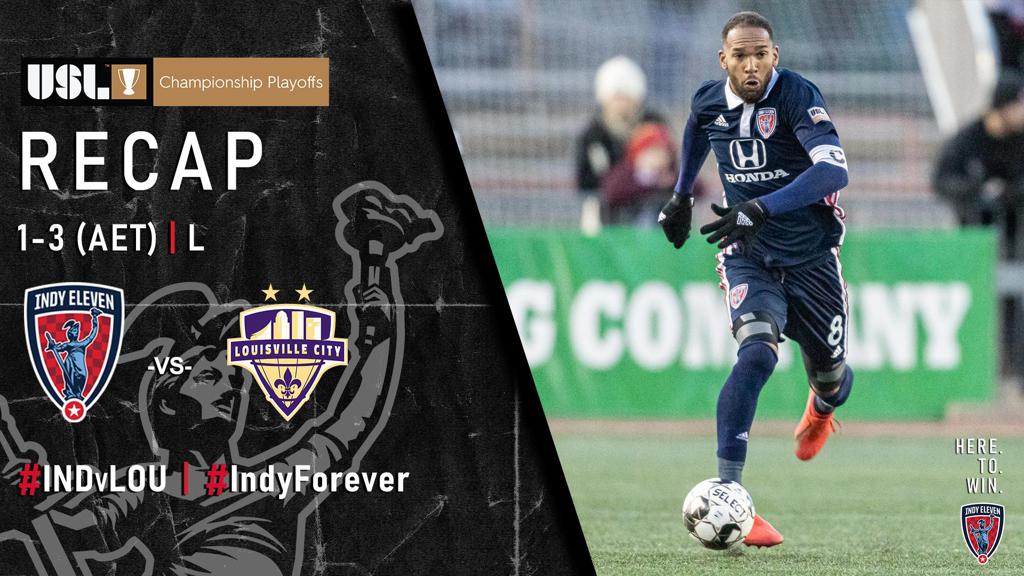 Indy Eleven was a minute away from qualifying for its first USL Championship Final, however, it was back-to-back defending league champion Louisville City FC that would have the final say in a 3-1 victory after added extra time in front of 7,171 fans at IUPUI Carroll Stadium.

Indy forward Tyler Pasher pushed the home side forward midway through the second half with a goal that looked as if it would stand as the match-winner. And it would have until the fourth of as many minutes of stoppage time, when LCFC striker Antoine Hoppenot stunned the crowd with a shot off a corner kick that snuck through traffic, pushing the match to 30 minutes of added extra time. In the first extra session it was Magnus Rasmussen giving the visitors the lead four minutes in, while Luke Spencer’s conversion from the penalty spot seven minutes from time sealed the result for the defending champs.

The defeat ended the most successful season in Indy Eleven’s six-year history, as the Boys in Blue notched club records in regular season wins (19), standings points (63) away wins (6), and home wins (13), while also adding its first two victories in USL Championship play. Despite the numerous accomplishments achieved across the season, Indiana’s Team will head into the offseason thinking about the opportunity that was in front of it this afternoon at Carroll Stadium.

“The reality is we’ve done really well this season. The club has come forward a long way,” said Indy Eleven Head Coach Martin Rennie. “We put ourselves in a great position to host the Eastern Conference Final.”

It was Indy Eleven who would create the most opportunistic looks of the first 15 minutes as neither side gave the other an early edge. A pair of crosses from Pasher nearly connected with forward Dane Kelly and midfielder Kenney Walker, respectively, but neither materialized into shots on goal as the tug of war for the Eastern Conference Final got off the ground.

Fans would wait 36 minutes before the game’s first true chance would present itself. Indy midfielder Macauley King played a lofted ball into the box after a Walker effort on goal had been blocked. King’s cross would find Kelly at the penalty spot, where the Jamaican snapped a header that forced Louisville ‘keeper Chris Hubbard into an impressive, acrobatic tip save.

Six minutes later, King connected with a header from a Walker corner that nearly gave the Boys in Blue the lead, but the effort glanced inches wide of the right post. Indy continued the pressure 60 seconds later when Pasher drove into the Louisville box before laying a driven cross down for a teammate, but Hubbard would coolly collect, his action ending a tight first 45 minutes.

The first chance of the second half came from out of nowhere a minute in, as Indy defender Paddy Barrett nearly caught Hubbard off his line with a lofted ball from midfield, but the LCFC ‘keeper scampered back to get both paws on the ball to steer it wide. Two minutes later, a deep corner connected with Louisville defender Paco Craig, whose headed effort softly glanced past the post. Indy generated a chance from a corner as well seven minutes later, but Karl Ouimette was unable to redirect fellow defender Ayoze’s service on frame.

Despite a flurry of Louisville corners, it was a quick counter by the Boys in Blue that broke the deadlock 67 minutes into the match. A lofted back-heel flick by Kelly over Louisville’s backline freed Pasher into space. The Canadian took one large touch forward before slotting home a low, left-footed effort, giving Indy the upper hand down the stretch.

Louisville began pressing harder in search of an equalizer, which they nearly found in the 81st minute. Indy ‘keeper Jordan Farr was caught in no man’s land after an awkward clearance that turned into a shot from Louisville’s Abdou Mbacke Thiam. The chip hung in the air for what seemed an eternity before clonking off the cross bar and away from the net, keeping Indy’s lead alive at 1-nil.

Louisville substitute George Davis IV tested Farr again six minutes later after the forward played a whipping cross into the box, forcing Farr to into an aerial save. From there, Indiana’s Team launched a counter that freed Pasher for a clean look on goal in the Louisville box, but the Canadian’s effort flew over.

Despite Indy’s best efforts to hold onto the lead, Hoppenot leveled the match in the 94th minute after a corner was cleared to the waiting midfielder. Hoppenot sent in a one-time effort that glided through a box full of players and somehow into the back of the net, sending Louisville’s sizable away support into a frenzy – and the match into extra time at one all.

Four minutes into stoppage time Louisville took their first lead of the match, set up by a back heel flick from Thiam that connected with Rasmussen in the Indy box. Rasmussen took one touch before passing the ball into the bottom left corner of Farr’s net, keeping the momentum squarely on the side of the visitors.

Indy almost drew level in the 101st minute after a darting run from Pasher resulted in a cross for Indy substitute Ilija Ilic, who would settle and send an effort on net only to see a Louisville defender block the equalizer attempt.

Louisville earned their chance to put the game away after a being awarded a dubious penalty in the 111th minute after Farr collided with LCFC’s Brian Ownby in the box. Spencer stepped up to take the penalty in the 113th minute, which he placed in the top right corner to secure the insurance goal.

Louisville went on to withstand Indy’s attempts from there on out, bringing an end to the Eleven’s impressive postseason run and a home undefeated streak across all competitions that spanned 27 games dating back to last July.

“Those players have done us proud,” Rennie said. “We’re going to keep improving and make sure we’re right up there at the top.”