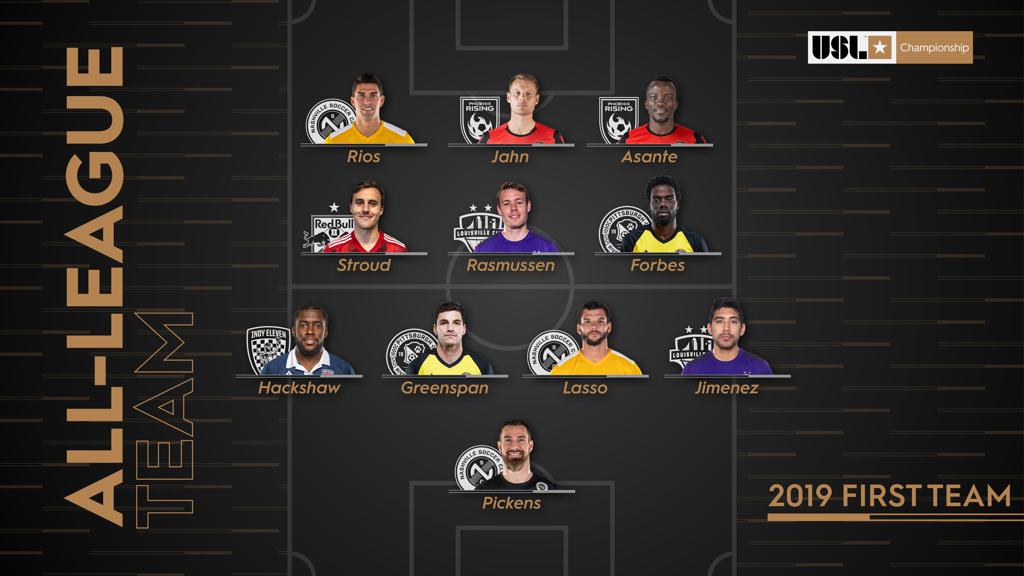 Indy Eleven is proud to announce defender Neveal Hackshaw has been named to the USL Championship’s All-League First Team and Defender of the Year Finalist for the 2019 season. The finalists for the 2019 USL Championship Awards were announced by the United Soccer League on Wednesday, with the leading performers in five categories earning nomination after a historic 2019 campaign.

“Neveal has been an outstanding performer all season long,” said Indy Eleven Head Coach Martin Rennie. “He has done an excellent job defensively and has been very involved in our attacking play, as well. He has added a lot to our team on and off the field.”

In his first season with the Boys in Blue, Hackshaw, 24, played a pivotal role in Coach Rennie’s squad, starting 32 of his 33 matches played across all competitions in 2019. The defender’s consistency during the season helped Indy Eleven earn the Eastern Conference’s third seed in the USL Championship Playoffs and capture a pair of postseason wins en route to hosting the Eastern Conference Final last Saturday.

Hackshaw ranked in the USL Championship’s top 10 among outfield players with 231 recoveries, won 65.8% of duels – 10th in the league among players to win at least 175 duels in the regular season – and won 29 of 39 tackles. Moreover, he’s been a thorn in the side of opposing attackers all season long, racking up 88 clearances and 14 shot-denying blocks. Hackshaw also tallied 42 interceptions, keeping the opposition’s forward passing to a minimum.

The stout defender also put up impressive performances in the attacking third, notching two goals from 16 shots and had one assist out of the nine chances he created over the course of the year.

In addition to his league play, Hackshaw was called upon to represent Trinidad & Tobago in CONCACAF Gold Cup and Nations League competitions, bringing his international first-team appearances to 12.

The 2019 USL Championship All-League Team was voted on by club management and a league-wide media panel that included representation from every USL market.

The award winners will be announced between Tuesday, Nov. 19 and Thursday, Nov. 21,​​​​ following the 2019 USL Championship Final, which will air live on ESPN2 and ESPN Deportes in the United States on Sunday, November 17 at 7:30 p.m. ET as Louisville City FC of the Eastern Conference and Real Monarchs SLC of the Western Conference meet at Lynn Stadium in Louisville, Kentucky.

With 2019 now in the book, Indy Eleven continues to prepare for the upcoming 2020 USL Championship season. Season ticket packages for 2020 are now available at IndyEleven.com/season-tickets or by calling 317-685-1100.

GK – Matt Pickens, Nashville SC: Pickens claimed the Championship’s Golden Glove with a 0.64 goals-against average and posted a league-high 14 shutouts during the regular season on a 79.8 save percentage.

D – Neveal Hackshaw, Indy Eleven: Hackshaw ranked in the top 10 among outfield players with 231 recoveries, won 65.8 of duels – 10th in the league among players to win at least 175 duels in the regular season – and won 29 of 39 tackles.

D – Joe Greenspan, Pittsburgh Riverhounds SC: Greenspan led a defensive line that recorded a league-best 17 shutouts as he finished fourth in the league in clearances with 151, made 44 interceptions, won 69.4 percent of duels and 75 percent of aerials while also chipping in four goals and two assists.

D – Forrest Lasso, Nashville SC: Lasso provided a major boost to Nashville’s defense after his midseason arrival as he recorded 60 clearances and 61 recoveries while NSC posted a 0.43 goals-against average with him on the field over the second half of the season.

D – Oscar Jimenez, Louisville City FC: Jimenez finished tied for second in the league with 90 chances created, posted seven assists and made 191 recoveries while completing 1,498 passes at an accuracy rate of 81.6 percent.

M – Jared Stroud, New York Red Bulls II: Stroud recorded 15 goals and nine assists to lead the Red Bulls II back to the postseason for a fifth consecutive year, and finished tied for second in the league with 90 chances created and tied for third with 18 Big Chances Created.

M – Magnus Rasmussen, Louisville City FC: Rasmussen led Louisville with 13 goals, including three tallies from outside the penalty area, while also completing 1,003 passes at an accuracy rate of 80 percent and recording three assists and 33 chances created.

2019 Goalkeeper of the Year Finalists – Winner announced Tuesday, Nov. 19
Zac Lubin, Phoenix Rising FC: Lubin finished tied for second in the league with 13 shutouts while recording 79 saves, the most of any goalkeeper to record double-digit shutouts over the regular season, at a save percentage of 75.7 percent.

Kyle Morton, Pittsburgh Riverhounds SC: Morton finished second in the league with a 0.83 goals-against average, finished tied for second with 13 shutouts and played a key role as the Hounds posted the second-longest shutout streak in Championship history of 698 minutes.

Matt Pickens, Nashville SC: Pickens earned the Championship’s Golden Glove with a 0.64 goals-against average while posting a league-high 14 shutouts and a save percentage of 79.8 percent that saw him lead NSC to a second-place finish in the Eastern Conference.

Neveal Hackshaw, Indy Eleven: Hackshaw proved an integral part of an Indy defense that conceded a league-fewest six goals at home while ranking in the top 10 among outfield players with 231 recoveries and winning 65.8 of duels – 10th in the league among players to win at least 175 duels in the regular season.

Oscar Jimenez, Louisville City FC: Jimenez added to his reputation as one of the leading dead-ball specialists in the league, finishing tied for second in the Championship in Chances Created with 90 while recording seven assists and completing 1,498 passes at an accuracy rate of 81.6 percent.

Bob Lilley, Pittsburgh Riverhounds SC: In his second season with the Hounds, Lilley led Pittsburgh to a first-place finish in the Eastern Conference as his side led the Championship with 17 shutouts and posted a club record for wins in a regular season with 19.

Ian Russell, Reno 1868 FC: Russell led Reno to a third consecutive postseason berth and its best finish in the Championship’s Western Conference as it ranked third in the league with 72 goals to take second position in the standings.

Felipe Hernandez, Swope Park Rangers: A member of the 2018 USL 20 Under 20, Hernandez continued to raise his game to the tune of eight goals, five assists and 45 chances created for the Rangers this season.

Douglas Martinez, Real Monarchs SLC: Earning selection to the Honduras National Team during the campaign, Martinez scored 16 goals and added six assists for the Monarchs at a rate of a goal every 109.2 minutes for the Western Conference Champion.

Cristian Parano, San Antonio FC: The young Argentine recorded seven goals and six assists while posting 53 chances created over the course of his first season in San Antonio, earning the No. 2 position in the 2019 USL 20 Under 20 in the process.

Solomon Asante, Phoenix Rising FC: Asante became only the second player in the Championship’s history to win both the Golden Boot and Assists Champion awards, setting a league record with 17 assists and 39 combined goals and assists for the Regular Season Title-Winners.

Kenardo Forbes, Pittsburgh Riverhounds SC: Forbes orchestrated the Hounds’ ascent to the top of the Championship’s Eastern Conference, recording nine assists and four goals while completing 1,513 passes and making 291 recoveries as he appeared in every game of the regular season.

Daniel Rios, Nashville SC: Rios became the first player in the Championship’s history to record 20 regular-season goals in back-to-back seasons as he led Nashville SC to a second-place finish in the Eastern Conference with a spectacular campaign.