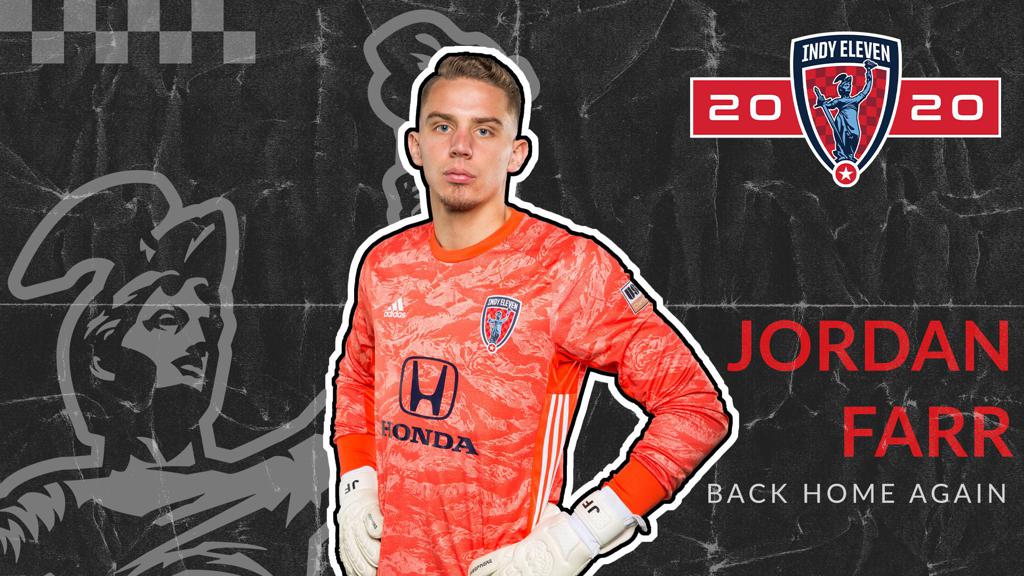 Indy Eleven’s string of re-signings ahead of the 2020 USL Championship season continued today with the official return of goalkeeper Jordan Farr for a third season with the Boys in Blue. Per club policy, terms of the contract will not be announced.

“Getting to re-sign with Indy Eleven for the 2020 season means a lot to me and my family.  We’ve truly fallen in love with the community we’ve made here in Indianapolis with the fans, with our church and with this club, and we cannot thank the organization enough for bringing us back on,” said the 25-year-old Farr. “With our talent, depth, experience and the culture that we’ve built in the last year, the chance to expand on that into 2020 is really exciting. Our fans are going to see that we are building to win it all and are excited to get back on the field and make an impact next year.”

After a preseason injury forced him to miss nearly all his rookie campaign for Indy Eleven in 2018, Farr emerged last season as a rock-solid option off the bench while spelling regular starter Evan Newton. The native of Salem, Ore., put in important minutes across three different competitions for Indiana’s Team in 2019, combining with Newton to backstop the 36-team USL Championship’s second stingiest defense.

“Having a reliable goalkeeper like Jordan Farr who can keep the team moving in the right direction is vital to success in a league as demanding as the USL Championship,” said Indy Eleven Head Coach Martin Rennie. “His performances this past season can serve as a lesson in perseverance for any player at any level. Jordan had the character and dedication to improve during a time of adversity in his first season, and that helped him be prepared when his number was called this year. We’re thrilled for the success he enjoyed this season and to have him back in the squad for 2020.”

In 12 combined USL Championship regular season and playoff games (10 starts), Farr registered an impressive 0.66 goals against average (seven goals allowed in 956 minutes), while notching a 7W-1L-2D record and five shutouts – including clean sheets in both of Indy Eleven’s 1-0 wins during postseason play.

Farr made his professional debut in Lamar Hunt U.S. Open Cup play back on May 15, coming in cold off the bench to post 69 shutout minutes in a 1-0 win over Lansing Ignite FC in Third Round action. He followed that up two weeks later with another impressive showing in a 1-0 Fourth Round defeat on the road at Pittsburgh Riverhounds SC.

Farr’s return in 2020 alongside Newton gives Indy Eleven the USL Championship’s sturdiest one-two punch between the posts heading into the league’s offseason. With today’s announcement, there are now nine Boys in Blue confirmed for next season’s roster; Indy Eleven will announce another piece of roster news each day this week, including its first new signing of the offseason on Friday.

Indy Eleven fans can guarantee their return for every game at Lucas Oil Stadium next year as well by securing a 2020 Season Ticket Membership, available now at IndyEleven.com/season-tickets or by calling 317-685-1100.