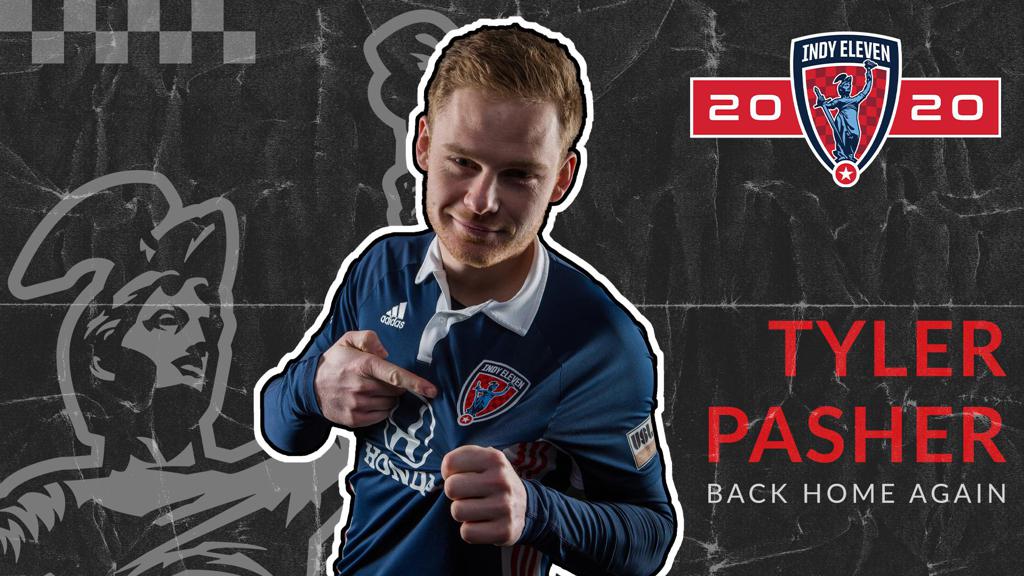 Indy Eleven continued its series of pivotal re-signings for the 2020 season today with the announcement that forward Tyler Pasher will return to the Circle City for a third season. Per club policy, terms of the contract will not be released.

“Coming back to Indy Eleven to build on the team’s best season ever is a challenge I am looking forward to in 2020,” said Pasher. “This city and our fans – especially the Brickyard Battalion – have really embraced me on and off the field over the last two years. I cannot wait to give back to them with an even greater effort next season and reward them with the trophies they deserve to share with this club.”

The 25-year-old Pasher enjoyed a breakout campaign with the Boys in Blue in 2019, leading the team in scoring with 13 goals, including two of the club’s three goals scored during play in the USL Championship Playoffs. Pasher also contributed four assists during his 35 appearances (27 starts) last season and finished second on the squad with 60 shots and 50 chances created.

“We are delighted to have Tyler Pasher returning for the 2020 season,” said Indy Eleven Head Coach Martin Rennie. “In 2019 he transitioned to an attacking position in our lineup and he produced many game-winning performances. Tyler has become a fan favorite and we all look forward to watching him here in Indy again next season.”

Pasher came to Indy Eleven prior to the 2018 season, which was preceded by stints with Major League Soccer’s Sporting Kansas City and USL Championship sides Swope Park Rangers and Pittsburgh Riverhounds SC. For more information on the product of the Newcastle United and Toronto FC youth academies, click here to visit Pasher’s full player bio on indyeleven.com.

Pasher is the eleventh player from last year’s roster confirmed to return in 2020, solidifying a core that led Indiana’s Team to club records in wins (19), standings points (63), home wins (13) and away wins (6) and to its first two victories in USL Championship postseason action. Indy Eleven plans further player announcements throughout the week, with more returning players and new Boys in Blue set to be unveiled.

Indy Eleven fans can also guarantee their return for every game at Lucas Oil Stadium next year by securing a 2020 Season Ticket Membership, available now at IndyEleven.com/season-tickets or by calling 317-685-1100. Indy Eleven’s new 2020 adidas away jerseys and Holiday Gift Packs for your favorite soccer fans including tickets and exclusive winter-themed merchandise are also available now at indyeleven.com.