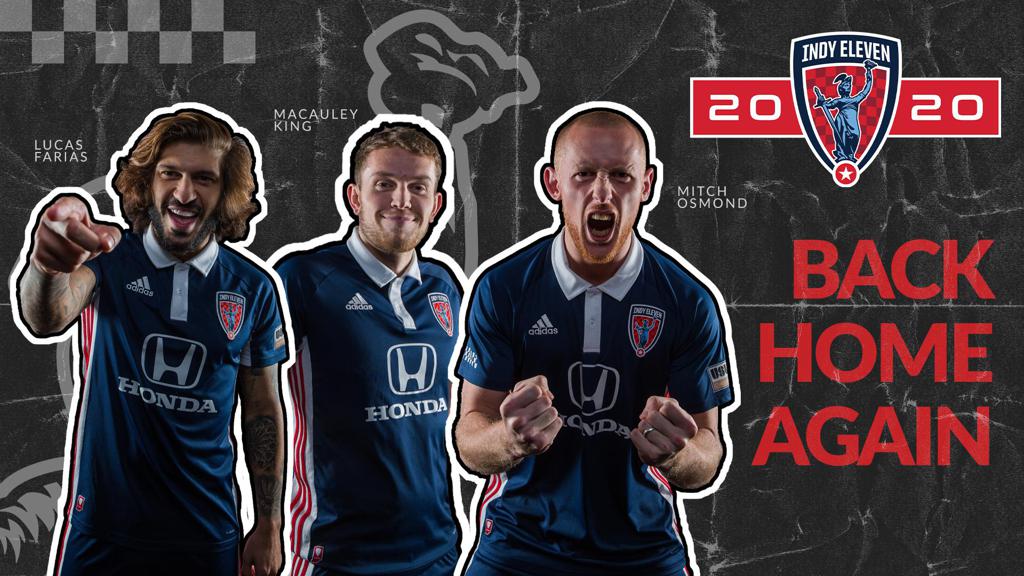 Indy Eleven continued to bring back members from last season’s successful squad with Thursday’s announcement that Indiana’s Team has exercised the contract options on defender Mitch Osmond and midfielders Lucas Farias and Macauley King. Per club policy, terms of the agreements bringing the trio of players back to Indianapolis will not be released.

“With the return of Lucas, Mitch and Macca, we bring back three players who emerged as solid contributors for us in 2019,” said Indy Eleven Head Coach Martin Rennie. “All three of these players are on the upside of their professional careers, and we’re excited to have them build their quality and consistency here with us in 2020.”

The 24-year-old King was a steady contributor on the flanks for Indiana’s Team, starting 17 of his 22 appearances in USL Championship action, including all three of the squad’s postseason contests. The England native and Young Harris College product notched three assists to go along with one goal in his rookie season. Click here for King’s player bio on IndyEleven.com.

Osmond worked his way into Indy’s three-man backline rotation, starting 15 of his 17 appearances during his first season with Indiana’s Team. The towering Australian center back ended the season with the second most interceptions on the squad (41) and registered in the club’s top five in blocks (15), clearances (41), tackles won (31), and aerial duels won (37).

Farias, 25, had found a regular spot on the right side of Rennie’s starting lineup by the middle of 2019, but a late-season leg injury cut his year short and limited him to 13 regular season appearances (11 starts). The Brazilian contributed three assists from his right midfield slot, from where he completed 81% of his passes. Click here for Farias’ player bio on IndyEleven.com.

Thursday’s announcement confirmed the return of 14 players that helped Indy Eleven register club records in wins (19), standings points (63), home wins (13) and away wins (6) in addition to its first two USL Championship Playoffs victories. The roster now stands at 16 players heading into the 2020 season, and one more new addition is set to be announced on Friday.

“On behalf of the organization, I want to thank Alioune, Nico, Gabriel and Eugene for their contributions not only on the field, but to what they contributed towards building a winning culture here last season,” said Rennie.

Indy Eleven fans can guarantee their spots at every game at Lucas Oil Stadium next year by securing a 2020 Season Ticket Membership, available now at IndyEleven.com/season-tickets or by calling 317-685-1100. Indy Eleven’s new 2020 adidas away jerseys and Holiday Gift Packs for your favorite soccer fans including tickets and exclusive winter-themed merchandise are also available now at indyeleven.com.