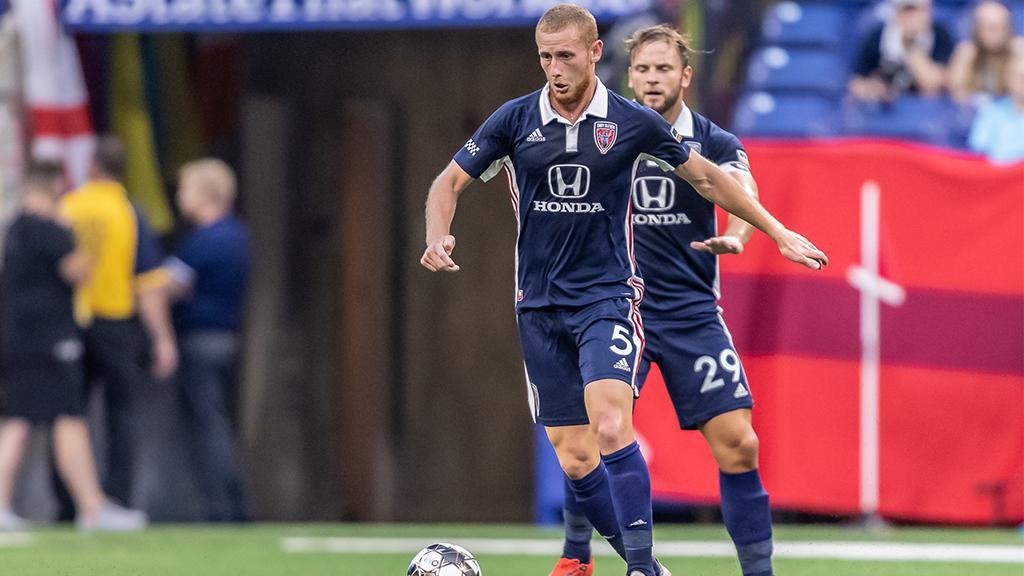 Clouds of dry food particulate hung in the air, swirling in the sunlight that poured into the room as busy hands quickly shuffled across the tables below. The Clif Bar Baking Company of Indianapolis hosted Indy Eleven players, coaches and front office staff this past October for the first-ever meal packing event in its brand-new facility just northwest of the Circle City. In tandem with the Million Meal Movement, the goal was to pack over 6,000 meals as quickly as possible for local schools whose students were battling food insecurity. Though the day was filled with many laughs and smiles among those in attendance, the event meant so much more to one of the Boys in Blue.

Food insecurity, by definition, is having limited or uncertain access to adequate food. It’s a problem that has plagued Indiana over the years – and one that Indy Eleven defender Mitch Osmond experienced firsthand.

In 2015, Osmond migrated from his hometown of Sydney, Australia, to attend Calumet College of St. Joseph, a small private university nestled in the heart of Whiting, Indiana. Having played soccer at a good level back home, the then-21-year-old arrived stateside, eager to pursue a degree and continue his soccer career, armed with just a handful of his own belongings and the funds in his bank account.

"I wasn’t like a lot of other student athletes,” Osmond said. “I didn’t have any financial support. It was just what I had saved, and that was just to get me through until I found some way of making money.”

Though his path was unconventional, Osmond was determined to make the most of his venture across the Pacific Ocean. Unfortunately, work was hard to come by for the Australian, whose savings account depleted quickly as bills came rolling in. With the mounting stress of class, soccer and financial hardships, it wasn’t long before Osmond needed help to make ends meet.

“I was in a difficult spot where I couldn’t afford to buy food, or to really pay my rent,” said Osmond. “I was here about two months before I became dependent on the food pantry.”

The CCSJ Food Pantry, located in the basement of the main hall on Calumet College’s campus, became a haven for Osmond. Founded in 2013, the food pantry serves to provide access to food and personal hygiene products to students who have fallen on hard times. The program was still in its infancy at the time, having just partnered with the Food Bank of Northwest Indiana the previous year, but the sound of Osmond’s growling stomach drowned out any concerns over the scant selection of food.

“The first couple times there was just Hamburger Helper, some canned goods and some ramen noodles,” Osmond recalled. “I remember thinking, ‘I don’t have to pay for this and I’m really hungry.’ I took as much as they would let me take and kept going back.”

Osmond was one of many that relied on Calumet College’s generosity, and as the number of hungry mouths that came in search of food grew, so did the county’s attention.

In May 2015, Lake County-based Legacy Foundation had awarded nearly $220,000 in grants to 19 non-for-profit organizations in the northwest region, with Calumet College and the Food Bank of Northwest Indiana being among the recipients. By year’s end, students were able to pick from bread, frozen meats and the occasional fruits in addition to nonperishable goods during their trips to the campus food pantry.

“It turned into something that went from trying to survive to not actually being too bad at all,” said Osmond. “At that time I had nothing, so that was everything to me.”

It wasn’t easy, but the food pantry was a source of stability for Osmond. Over the course of almost 12 months, trips to the CCSJ Food Pantry were as much of Osmond’s routine as going to class and hitting the pitch for the Calumet Crimson Wave. Even though a steady job was eventually worked into his busy schedule, visits to the food pantry were still a necessity.

“It was difficult, especially when you’re going to school and playing full time. It’s a lot,” said Osmond. “Once I got to a position where it would’ve helped me to go there, but I could afford food, I tried my best not to go because I knew that other people needed it more than I did at that point.”

The trips eventually ended altogether, as his collegiate career continued at the University of Rio Grande in Ohio the following year. As Osmond prepares for his second professional season with Indiana’s Team in 2020, raising his three-year-old son alongside his wife, Jordan, brings a different kind of budget restraints, but his experience with food insecurity is something he won’t soon forget.

“My experience is very short in the big picture of things. That kind of kindness from people that didn’t really have to do it will stick with me for my entire life,” said Osmond. “In that respect I’ve been very lucky.”

Now, having had the chance to pack meals with Clif Bar Baking Company of Indianapolis, Osmond looks forward to future opportunities to battle food security in his family’s new community.

“I think it was one of the most rewarding things I’ve ever done,” Osmond said. “Take away any achievements in my career or personal life, but in such a short amount of time to go from one side of that resource to the other was incredibly rewarding.”

Today, nearly one million people across the state of Indiana – and over 100,000 in Indianapolis alone – don’t know where their next meal will come from. For information on how you can help battle food insecurity, visit millionmealmovement.org.