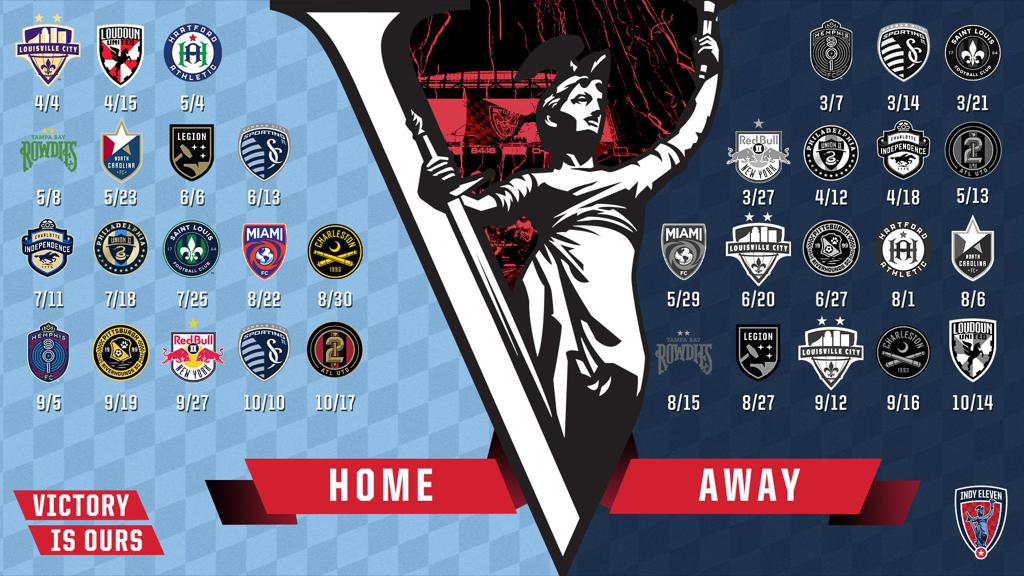 In tandem with USL Championship, Indy Eleven today unveiled its full 34-game 2020 regular season slate that will compose the seventh year of action for Indiana’s Team. Those games will be part of the 10th anniversary season for the USL Championship, which will include 595 matches contested by its 35 clubs from March through October.

The full Indy Eleven 2020 schedule can be found below and at indyeleven.com, while a one-page printable PDF version can be downloaded here. Kickoff times and broadcast information will be confirmed in the coming weeks.

“We are always excited to see what the season will look like and are pleased with how the 2020 calendar lays out for us,” said Indy Eleven CEO Greg Stremlaw. “With a fan-friendly home schedule that is weekend-heavy and an overall calendar that includes very few three-game weeks and a handful of bye weeks, we are absolutely ready to build upon last year’s historic season.”

Seats for Indy Eleven’s 17-game home schedule at Lucas Oil Stadium – which includes 15 weekend dates – are currently available via four ticketing options, all of which will include a ticket for the home opener on Saturday, April 4, against arch-rival Louisville City FC:

Fans can visit indyeleven.com/tickets or call 317-685-1100 (Mon.-Fri., 9am-5pm) for full details and to secure their seats. Single-game tickets for all 17 home games will be made available to the public in early February.

Highlights from the 2020 Indy Eleven calendar include:

Following the conclusion of the regular season, the top 10 teams from both the Eastern and Western Conferences will qualify for the 2020 USL Championship Playoffs, culminating with the USL Championship Final that will be held between November 12-16 and aired on an ESPN broadcast network.