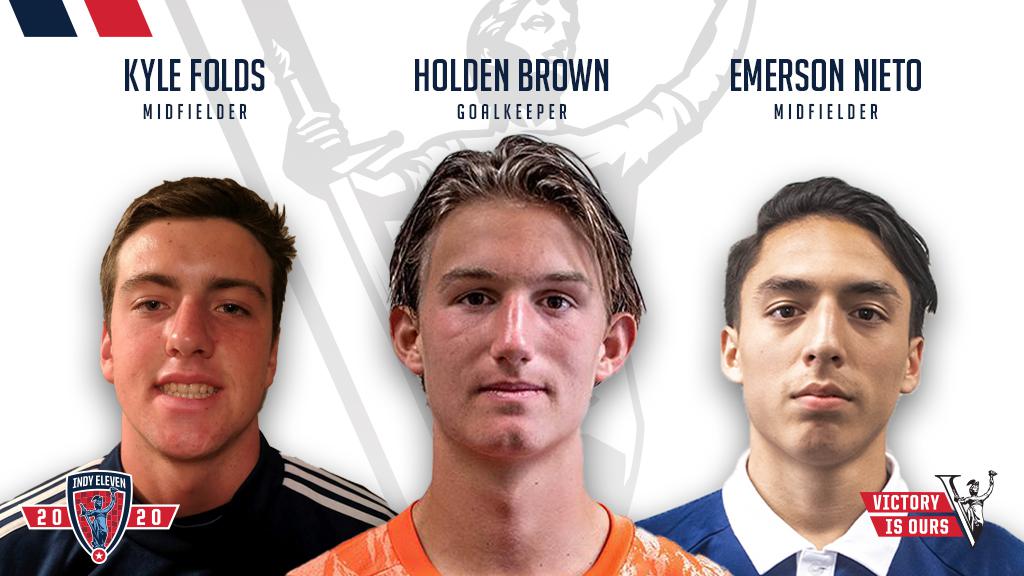 INDIANAPOLIS (Friday, January 17, 2020) – Indy Eleven continued preparations for its 2020 season today with the signings of three players to USL Academy contracts – goalkeeper Holden Brown and midfielders Kyle Folds and Emerson Nieto. In joining the club as USL Academy signings, the trio of talented 18-year-olds will retain their future NCAA eligibility.

All three former players from the Indiana Fire Juniors Development Academy set-up will report to Indy Eleven for its upcoming preseason camp and spend the first half of the 2020 USL Championship season with Indiana’s Team before leaving for collegiate destinations in the summer. Nieto and Brown will be spending their second seasons with the Boys in Blue after signing Academy contracts with Indy Eleven last May and July, respectively.

“The addition of these three high-level players will provide another injection of talent and energy to our roster,” said Indy Eleven Head Coach Martin Rennie. “We loved the progress that Emerson and Holden made last year, and Kyle having trained with us on some occasions last season we also know what he’ll bring to the club. We’re excited to be a continued part of their development as young professionals and look forward to their contributions to Indy Eleven this season.”

A product of Bishop Dwenger High School in his hometown of Fort Wayne, Ind., Nieto will look to build on a six-month stint with Indiana’s Team last year. The soon-to-be Indiana Hoosier midfielder made his professional debut with a late-game appearance last June 27 in a 3-0 home win over Birmingham Legion FC. Along with his one minute of action, Nieto made the squad’s 18-man gameday roster in regular season play for six additional games in 2019.

While Brown did not register any minutes, he did serve as the primary back-up goalkeeper behind Jordan Farr during the club’s final six games in 2019, including all three playoff contests, while regular starter Evan Newton was injured. The Zionsville, Ind., native will attend the University of Virginia beginning in the fall.

The newcomer of the group, Folds is a native of Berea, Ohio, who played for Cleveland-based powerhouse St. Ignatius High School, which was named the “Team of the Decade” for high school boys soccer by MaxPreps.com. A three-year starter, Folds helped St. Ignatius to an undefeated 21-0-2 record and the OHSAA Division I state title as a senior last fall. Along with Nieto, the former Columbus Crew Academy performer has committed to play for Indiana University under head coach Todd Yeagley next fall.

Today’s signings brings the number of players confirmed to the Indy Eleven 2020 roster to 21, with Folds included as the fourth new member of the “Boys in Blue” alongside Carl Haworth, Conner Antley and Nick Moon.

Seats for Indy Eleven’s 17-game home schedule at Lucas Oil Stadium are currently available via four ticketing options – Full Season Memberships, Half Season Packages, 5-Game Partial Season Plans and Group Tickets – all of which include a ticket for the home opener on Saturday, April 4, against arch-rival Louisville City FC. Fans can visit indyeleven.com/tickets or call 317-685-1100 (Mon.-Fri., 9am-5pm) for full details and to secure their seats today.