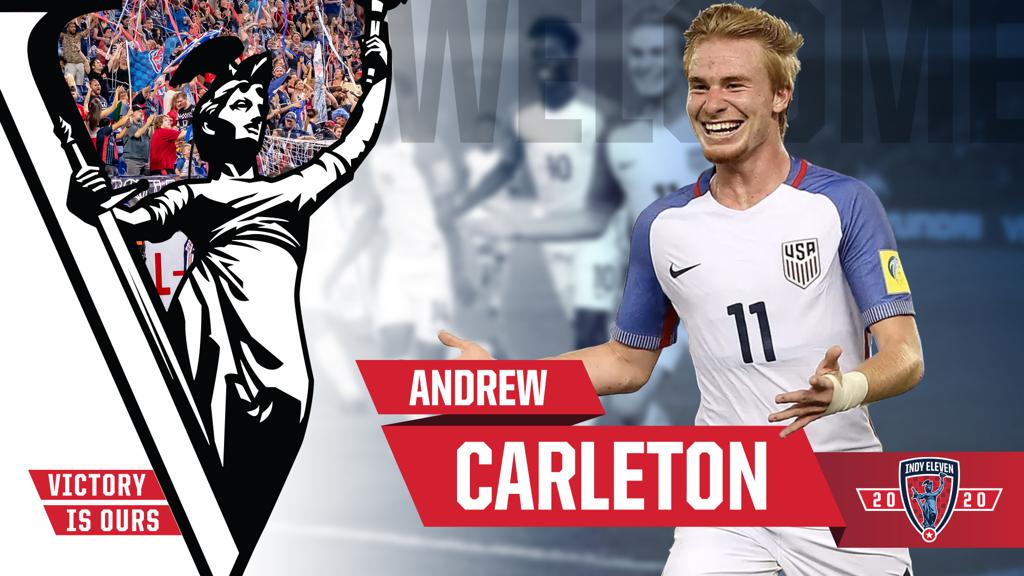 Per club policy, financial terms of the loan that brings the U.S. Youth International to the Boys in Blue will not be released.

“Acquiring one of the most talented young Americans playing domestically speaks volumes to the caliber of squad we plan to field in 2020,” said Indy Eleven Head Coach Martin Rennie. “Andrew’s attacking mindset, ability to score in different ways and vision make him a handful to deal with in the final third. We saw firsthand towards the end of last season that he can perform quite well at this level, and we’ll expect him to be a steady contributor for us this season.”

Carleton, 19, comes to Indy after three seasons in the Atlanta United organization, which made him its first Homegrown Player signing as a 16-year-old in June 2016. The native of Powder Springs, Georgia, made 11 first-team appearances for Atlanta from 2017-19, starting twice and notching one assist in 229 minutes of MLS regular season play. In addition, Carleton appeared in six Lamar Hunt U.S. Open Cup fixtures for the Five Stripes in those three seasons, tallying a goal and an assist.

“I am super excited to be in Indy and to get the season started up, and I want to thank Indy Eleven and Coach Rennie for giving me the opportunity to play here,” said Carleton. “I just want to go out there and work hard, enjoy my soccer, and win some games with a great group of guys.”

Carleton has played most of his minutes in USL Championship contests, first dipping his toes into the pro ranks following his 2016 summer signing via a four-game loan stint (one assist in 122 minutes) with Charleston Battery before featuring regularly with Atlanta United 2 the past two seasons. The striker posted two goals and two assists in 14 games (13 starts) during the 2018 USL Championship season, and followed that up with five goals and two assists in similar minutes across 2019 (15 games, 14 starts). His five goals last year all came during a torrid four-game stretch late in the season and included three game-winners – including a 61st minute clincher in ATL2’s 2-1 victory over Indy Eleven on September 25.

Carleton has also been a regular contributor for the United States Youth National Teams, earning over 40 caps between 2015-19 with the country’s U-15, U-17, U-18 & U-20 squads. Carleton was a standout performer for the U.S. Under-17 MNT that took part in the 2017 FIFA U-17 World Cup in India, as he scored twice and added three assists while starting all five games during the USA’s run to the tournament quarterfinals.

Carleton is the 22nd player officially under contract for the 2020 season and the club’s fifth new signing of the offseason, with fellow newcomers including veteran Canadian winger Carl Haworth and reigning USL League One Defender of the Year Conner Antley. The new quintet joins 17 returnees from the 2019 Eleven roster that posted a club-record 19 wins and 63 points in regular season play and two more victories in the USL Championship Playoffs.

Indy Eleven will officially begin its 2020 calendar with physicals and fitness testing this weekend before conducting its first practice session of the preseason next Monday, Jan. 27, at the Grand Park Events Center in Westfield. Indiana’s Team will begin its seventh season of play overall – and its third in USL Championship action – on Saturday, March 7, at Memphis 901 FC.