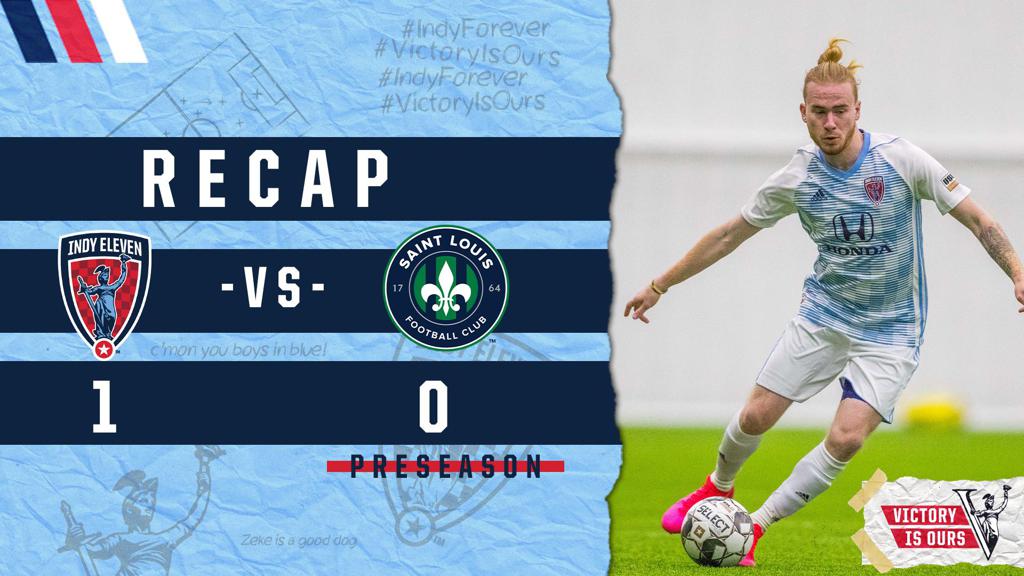 Indy Eleven used an early second-half goal by forward Andrew Carleton to post a 1-0 win over Saint Louis FC in a preseason exhibition contested Wednesday afternoon at Grand Park in Westfield. The victory over Saint Louis – the lone fellow USL Championship foe on Indy Eleven’s preseason calendar this year – gave the Boys in Blue their second exhibition win in as many tries after last Saturday’s 3-2 triumph over Bridges FC.

“We saw a lot of the things we were looking in training and saw some improvement from the game we played on Saturday, especially defensively. We had a lot of the ball and created a lot of chances, especially in the second half, so overall it was a good performance,” said Indy Eleven Head Coach Martin Rennie. “It’s preseason, so there’s always room for improvement, and I thought that maybe we could have taken some more of our chances better and made the game a little more straightforward. It was a good win and it gives us a good gauge against a team from our league that we think is going to be a solid competitor in the Eastern Conference.”

The early going saw Indy Eleven with the bulk of the possession and the best chance off the foot of midfielder Carl Haworth, whose 19th minute shot was snagged by Saint Louis ‘keeper Kyle Morton. Haworth was in the spotlight again in the 24th minute when his contact on Russell Cicerone inside the Eleven penalty area didn’t earn a point to the spot, that coming just seconds after Eleven forward Nick Moon felt he had a PK claim of his own after a joint challenge from STL defenders Sam Fink and Paris Gee.

The active Cicerone took aim in the latter part of the stanza, first missing just wide right from distance in the 34th minute before lashing a 41st minute shot near post at Indy goalkeeper Evan Newton, who did well to parry over the bar with both hands. Two minutes later it was Morton’s turn to step up, as he went low and left to stop Carleton’s one-on-one attempt that was set up by Tyler Pasher’s interception and square ball in the final third.

That particular Indy attacking connection would not be denied after the halftime break, as the Carleton headed Pasher’s looped ball from the endline home from close range to give Indy the advantage. The goal for the 19-year-old Carleton was his second in as many games after joining Indiana’s Team just two weeks ago on loan from Major League Soccer side Atlanta United FC. Indy nearly doubled its lead five minutes later, but Haworth’s low cross whistled through the six-yard box without a touch from an onrushing Moon.

Indy and Saint Louis underwent “line changes” in the 60th and 61st minutes, respectively, resulting in both squads turning over completely for the final half hour. The highlight of the last thirty minutes came in the 79th minute, when Eleven forward Ilija Ilic saw his clean bicycle attempt from 12 yards out bounce off the crossbar and straight down before being cleared from danger. Indy would see two more chances from one of its handful of trialists go wanting near the 85th minute, the first forcing a save at the near post and the second, set up by a well-struck cross from the left flank by Kenney Walker, missing just high.

The Boys in Blue will continue their exhibition slate in short order this Friday, Feb. 14, with another afternoon affair at Grand Park, this time against Detroit City FC of the National Independent Soccer Association (NISA). Fans can follow the action on the club’s @IndyElevenLive Twitter feed, presented by Honda, beginning at noon.

The countdown to the regular season stands at 24 days, as Indy Eleven will begin its seventh season of play – and third in the USL Championship – on Saturday, March 7, with a road contest at Memphis 901 FC (7:00 p.m.). After four games on the road in March, Indy Eleven will kick off the home portion of its regular season on Saturday, April 4, with a highly anticipated Eastern Conference Final rematch against archrival Louisville City FC (7:00 p.m.). Single-game tickets and several multi-game packages featuring the home opener can be found at indyeleven.com/tickets.