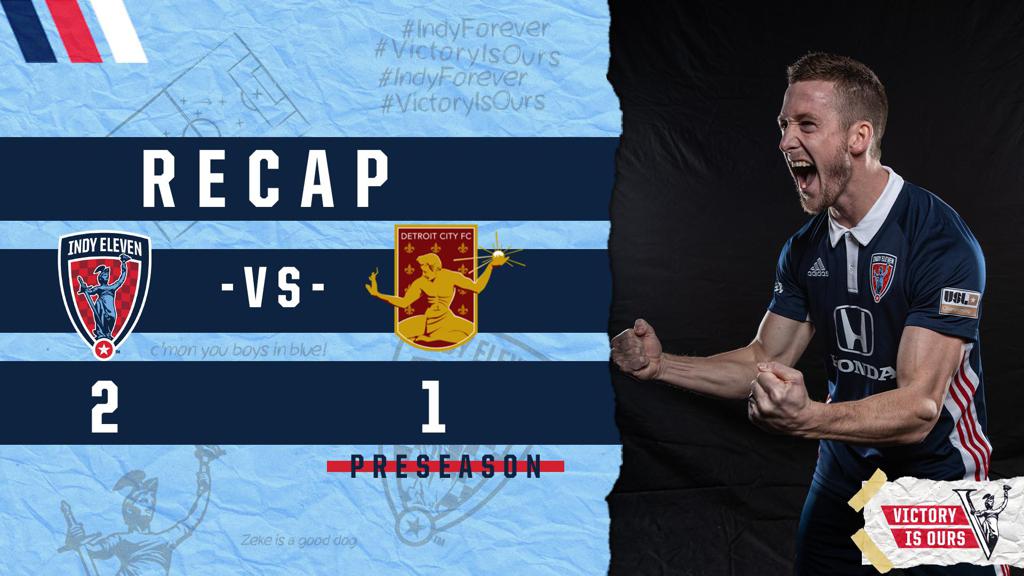 Indy Eleven tallied its second win in three days following a 2-1 victory against Detroit City FC Friday afternoon at Grand Park in Westfield. The preseason victory over Detroit City was Indy’s third in as many tries after Wednesday’s 1-0 victory over Saint Louis FC and last week’s 3-2 win against Bridges FC.

“It was a good dominating performance. I think overall, we played well,” said Indy Eleven Head Coach Martin Rennie. “We created lots of chances and scored a couple of good goals, and probably had another really good goal that should have stood that would have added to the score line. We can be pretty happy with where we are at this moment in the preseason.”

The first half saw Indy Eleven control the ball efficiently, continuing to create plays in the attacking third. The chances were rewarded in the 12th minute when Indy trialist Michael Scott was fouled in DCFC's penalty area, leading the official to award a penalty kick to the home side. Forward Ilija Ilic stepped up to the spot, striking the ball low and past Detroit's goaltender to push the Boys in Blue out front. Detroit had a chance to equalize, but a shot that bounced off the post was blown dead in the 34th minute after the offside flag went up.

Indiana’s Team extend their lead off a low finish from defender Conner Antley seven minutes into the second half, set up by a beautiful cutback inside DCFC’s box to shake the opposing defender. A line change led to a beautiful goal by forward Andrew Carleton off a pass from striking partner Tyler Pasher in the 65th minute, only to see it negated by the offside flag. Detroit City cut the lead to one in the 77th minute after a screamer from 30 yards out found the left side netting, just out of reach for Eleven goalkeeper Evan Newton to handle. However, solid defensive play down the stretch helped the Boys in Blue continue their preseason undefeated (3W-0L-0D).

“[Detroit] scored a really good goal, but it was a bit out of the blue as they didn’t have many chances on the day,” said Rennie. “There are definitely areas where we are still trying to improve and do much more in, but that’s what the preseason is for. The guys are looking better and sharper every day, and it’s all about improving so that we are ready to go once the results begin to count.”

The Boys in Blue will enjoy a nice break before resuming their preseason slate with a doubleheader on Saturday, Feb. 29 at Grand Park. The Circle City Men’s College Showcase will see the squad face off against the University of Indianapolis (10:00 a.m.) and Indiana University (8:00 p.m.). Both games will be open to the public, with fans being able to purchase one $5 ticket at the door that will be good for all games played that day. Fans can also follow the action on the club’s @IndyElevenLive Twitter feed, presented by Honda.

The countdown to the regular season stands at 22 days, as Indy Eleven will begin its seventh season of play – and third in the USL Championship – on Saturday, March 7, with a road contest at Memphis 901 FC (7:00 p.m.). After four games on the road in March, Indy Eleven will kick off the home portion of its regular season on Saturday, April 4, with a highly anticipated Eastern Conference Final rematch against archrival Louisville City FC (7:00 p.m.). Single-game tickets and several multi-game packages featuring the home opener can be found at indyeleven.com/tickets.