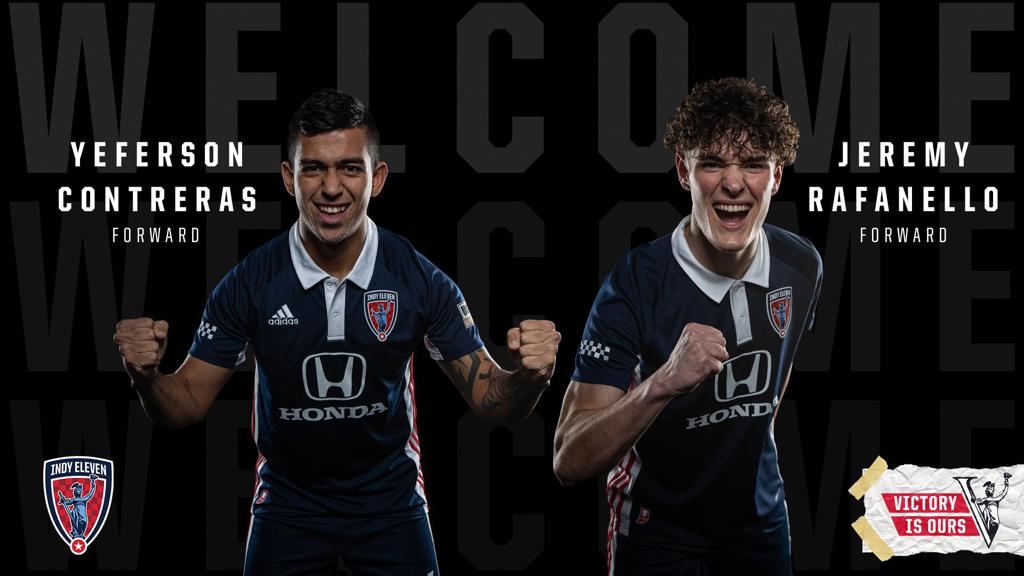 Indy Eleven added more firepower to its roster with today’s announcement that forwards Yeferson Contreras and Jeremy Rafanello have joined the Boys in Blue for the 2020 USL Championship season, pending league and federation approval. Per club policy, terms of both players’ agreements will not be released.

“We’re really excited to be signing two extremely talented young strikers. It’s not every day that you get to coach the talent that these guys have and we’re looking forward to helping them develop in their career,” said Indy Eleven Head Coach Martin Rennie. “Fans are going to be excited for what these players can bring to the table.”

Contreras, a native of Cucuta, Colombia, came up as a top prospect through América de Cali’s Under-17 system in 2017, ending the season as their league’s goal leader. The following season, Contreras graduated to América’s Under-20 squad, where he had another impressive showing in regular season and national tournament play. Contreras’ stellar performances earned him a call-up to América’s first team at the start of the 2018-19 season, making two Colombian top flight (Caregoría Primera A) appearances before going on loan to Orsomarso SC (Categoría Primera B) in August 2019. Now, 20-year-old Contreras arrives to the Circle City on loan for the 2020 USL Championship season.

“I'm very happy to have signed with such an important club like Indy Eleven. I want to do everything I can for the club to be successful and reach the USL Championship Final,” Contreras said. “Like every forward, my aspiration is to be the leading goal scorer, but my ultimate goal is to help the team anywhere I can so that we can lift a trophy at the end of the season.”

"I'm very excited to get the ball rolling here with Indy Eleven,” Rafanello said. “I'm looking forward to learning from the veterans on the squad and getting what should be a great season started."

Indy Eleven will begin its seventh season of play, and its third in the USL Championship, on Saturday, March 7, at Memphis 901 FC. After a month on the road, Indy Eleven will begin its home schedule at Lucas Oil Stadium on Saturday, April 4, against archrival Louisville City FC. Tickets for that game and others are currently available via five ticketing options – Single Game Tickets, Full Season Memberships, Half Season Packages, 5-Game Partial Season Plans and Group Tickets. Fans can visit indyeleven.com/tickets or call 317-685-1100 (Mon.-Fri., 9am-5pm) for full details and to secure their seats today.