Follow for Live Updates During Indy Eleven Matches vs. University of Indianapolis and Indiana University 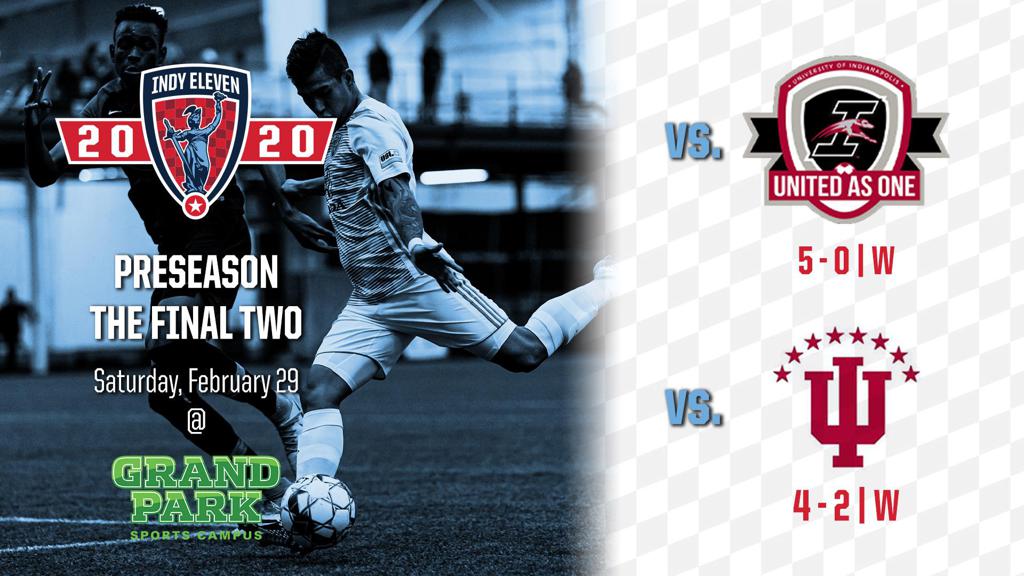 Indy Eleven will finish its preseason campaign on Saturday in a doubleheader at the team’s training home of the Grand Park Events Center and Sports Complex in Westfield. The Circle City Men’s College Showcase will see Indiana’s Team face off against the University of Indianapolis (10:00 a.m.) and Indiana University (8:00 p.m.). Both games will be open to the public, with fans being able to purchase one $10 ticket at the door that will be good for all games played that day. Fans can also follow the action on the @IndyElevenLive Twitter feed, presented by Honda, for in-game updates.

Follow this page throughout Saturday for match updates, including recaps, photos, video and more.

8:00 P.M.: After posting a 5-0 win in Game 1 over UIndy, an entirely different group of Boys in Blue will get their minutes in game two versus the perennial national powers from down the road in Bloomington. Here's how Coach Rennie will line 'em up for Game 2 ... 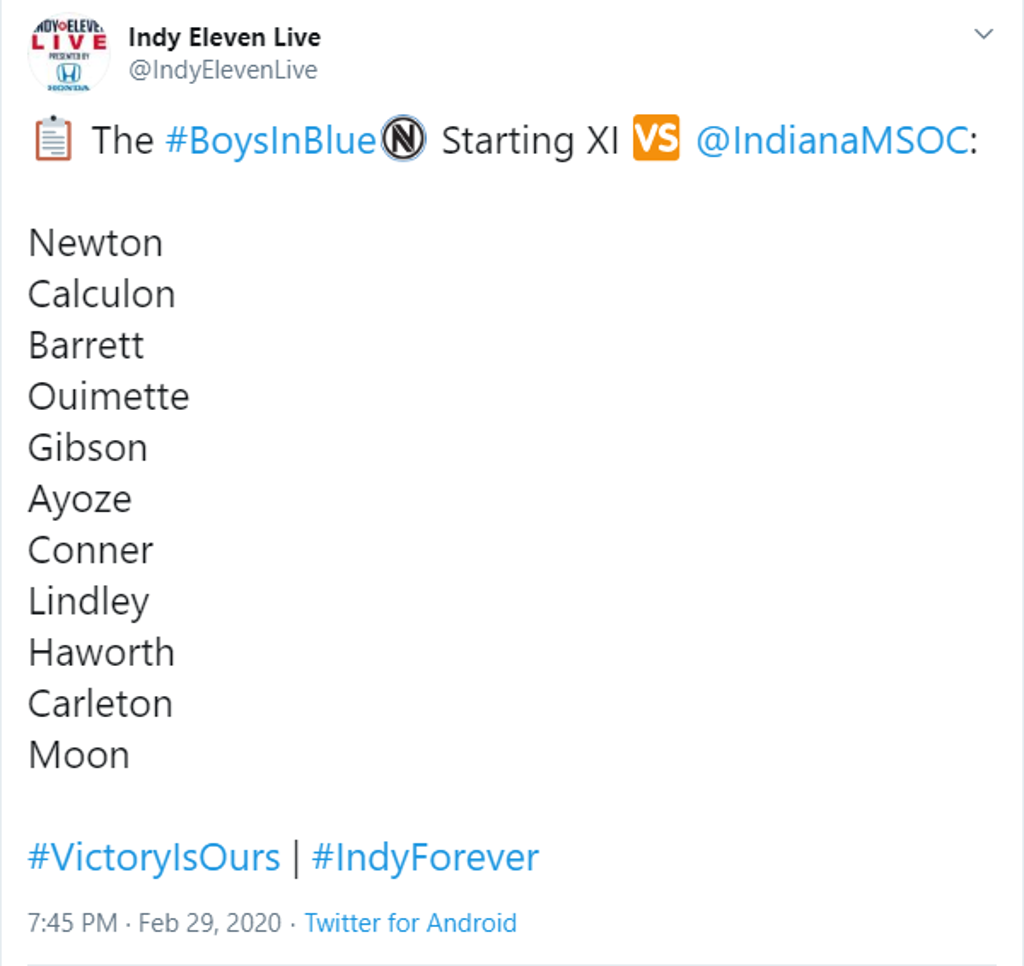 Similar to this morning's game against UIndy, Indy Eleven would go up early in the nightcap against the Hoosiers, this time via an Ayoze conversion from the penalty spot in the 7th minute. After forward Andrew Carleton went down under contact inside the area, the veteran Spaniard pinged his spot kick off the left post and in to put Indy up 1-0.

Carleton nearly doubled the advantage with a smash off the crossbar in the 17th minute. The best chance of the remainder of the half came via a pair of defenders near the half hour mark when Karl Ouimette nearly deflected in Paddy Barrett's short cross. IU's last defenders did well to recover and nullify a handful of other rushes towards the Hoosiers area.

The second half saw the chances that went wanting in the first half converted by both sides early on, the squads both scoring twice within an active eight minute span around the hour mark. Indy’s Cam Lindley started the barrage with a rebound on the doorstep in the 58th minute, but a pair of goals by IU in the 60th and 62nd minutes, the first coming off an own goal and the second off a sliding finish near the six that evened things suddenly at 2-2. However, Nick Moon would draw Indy’s second PK of the match in the 64th minute, and Ayoze would convert once again from the spot a minute later to retake the lead for the Eleven.

Indy midfielder Tyler Gibson would double the advantage in the 75th minute with a touch on of Carl Haworth’s solid cross into the area from the right sideline. Despite some more forays in attack by IU, Newton & Co. would close out things in the back and keep the Hoosiers at bay down the stretch.

10:00 A.M.: The Boys in Blue start their day with a 10:00 a.m. kick against UIndy, which ended their 2019 season last fall with an appearance in the NCAA Division II semifinals. Eleven Head Coach Martin Rennie went with the following XI, which included a pair of trialists: 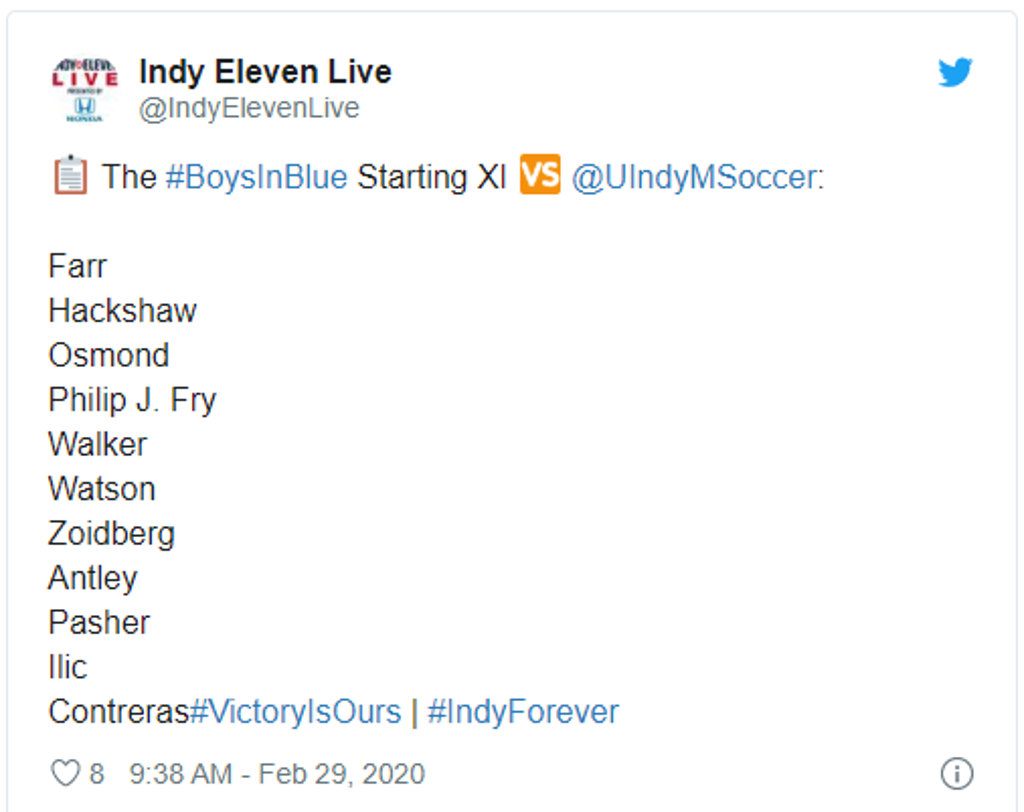 The Boys in Blue got on the board just four minutes in via midfielder Kenney Walker. Conner Antley’s cutback cross from the right endline was wisely dummied by Tyler Pasher to free up space for Walker, who finished well with a low shot from the penalty spot. The Eleven’s high press helped it dominate possession and chance in the first half hour, with Pasher’s chip from the outside of the area that landed wide of the left post in the 29th minute.

Left back Neveal Hackshaw had two chances to double the lead in the 41st minute from close range, his first poke hitting off the left post and his rebound chance hitting the recovering Greyhound ‘keeper Drew Mueller in the chest on his line. Goalkeeper Jordan Farr was forced into only one save off a headed free kick service, but did face more pressure in the final 10 minutes of the stanza.

Indy Eleven captain Matt Watson’s shot that forced a save just 20 seconds after halftime was a harbinger of things to come, as Boys in Blue put up two within the first five minutes of the second half. It was Pasher seeing his consistent effort pay off first in the 48th minute, as he ended a nice run up Route 1 with a finish from 15 yards out. Antley upped the advantage to 3-0 just two minutes later, as he beat multiple defenders on the endline to dance his way into the six before roofing a finish past Mueller.

The middle of the half saw another two goal in quick succession for the Boys in Blue, starting with forward Ilija Ilic’s 67th minute free kick from just outside the area that clipped both the edge of the Greyhounds wall and the right post before bouncing into goal. Two minutes later it was Yeferson Contreras finding paydirt with a shot from 16 yards that nestled into the right side netting.