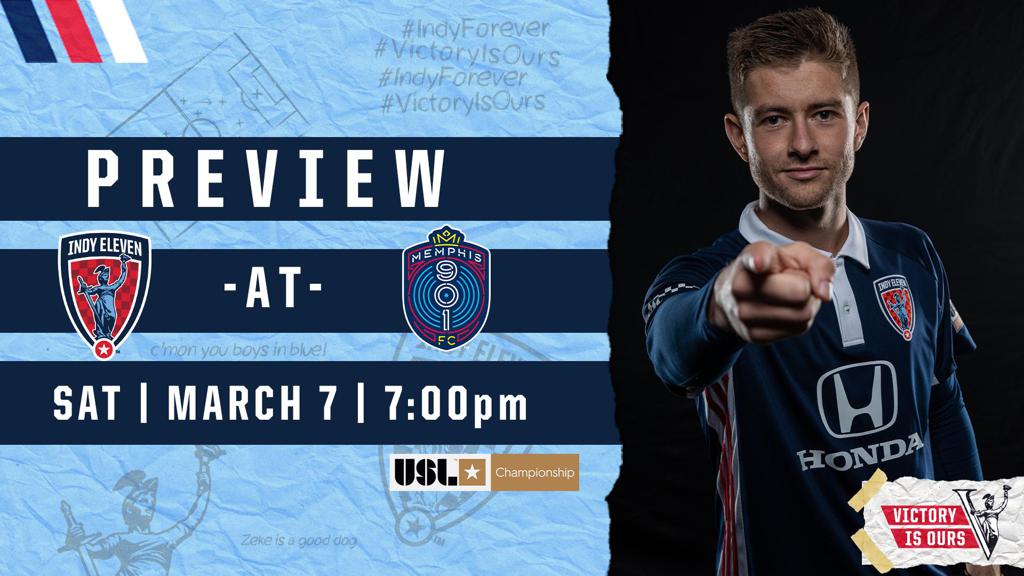 At long last, the Boys in Blue return to regular season action. Indy Eleven will make its 2020 USL Championship debut on the road at Memphis 901 FC this Saturday, March 7 at 7:00 p.m. Fans can stream the season opener via ESPN+ or follow along on the @IndyElevenLive Twitter feed, presented by Honda

I’m very pleased with how preseason went. We’re at an advantage with the number of players we have returning from last year, they already had a head start on what we were doing, which made it easier to incorporate the new players,” said Indy Eleven Head Coach Martin Rennie. “Now, we’re just looking forward to the season. There’s a lot of determination in the group, a lot of competition, so the guys are sharp.”

Indy Eleven finished third on the USL Championship’s Eastern Conference table (19W-9L-6D) last season, a significant jump from its eighth-place finish during the club’s inaugural USL Championship season in 2018. Coming off the heels of the most successful season six-year history – which included breaking club records in regular season wins (19), standings points (63) away wins (6), home wins (13) and its first two victories in USL Championship play – Indy will look to pick up where it left off in the season opener at Memphis’ AutoZone Park.

Memphis kept busy in the offseason as Head Coach Tim Mulqueen and Sporting Director Tim Howard teamed up to rework the team’s active roster. Of the club’s 20-man roster, only nine are returnees from the previous year. Eleven new faces have joined 901 FC ahead of the 2020 season, including the surprise announcement Wednesday that Howard will come out of retirement and add goalkeeper to his Co-owner and Sporting Director titles.

The two-game series against Memphis 901 FC last season ended wholly in Indy’s favor, the Boys in Blue going 2W-0L-0D with a pair of shutouts (6 GF; 0 GA) against the first-year team.

The first ever meeting against Memphis came in enemy territory on June 8, 2019. A late goal in the first half by former Boys in Blue forward Thomas Enevoldsen edged the Eleven into the lead before two unanswered strikes by Kim Do-Heon and Tyler Pasher in the second half secured the win.

Indy welcomed 901 FC to Lucas Oil Stadium for the second 2019 fixture on October 5. Indy found the goal of the evening in the 13th minute by Cristian Novoa before Karl Ouimette doubled the lead nine minutes later. Like many games last season, it was Pasher who had the last laugh, tallying the game’s third and final goal in the 77th minute.

Midfielder Cam Lindley was a staple in the Memphis 901 FC back line while on loan from Orlando City SC (MLS) last season, but the Carmel, Ind. native has brought his talents to the Circle City for 2020.

There wasn’t a teammate the 25-year-old couldn’t get the ball to last season, completing nearly 93% of his 1,436 passes through the midfield, more than anyone else on the squad. Lindley’s selflessness was a crucial piece in Coach Mulqueen’s offensive setup, also leading the team in assists (7) and chances created (56), in addition to notching a goal for himself.

After announcing his retirement from professional soccer nearly five months ago, Memphis 901 FC announced Wednesday afternoon that the USMNT legend Howard will indeed join the roster for the 2020 USL Championship season.

Howard spent what he thought was his last year playing professionally in goal for Major League Soccer’s Colorado Rapids. Howard made 25 appearances in the Rapids’ Starting XI in 2019, registering 73 saves, five shutouts and a 1.84 goals against average.