RECAP | INDY COMES BACK TO START SEASON WITH WIN 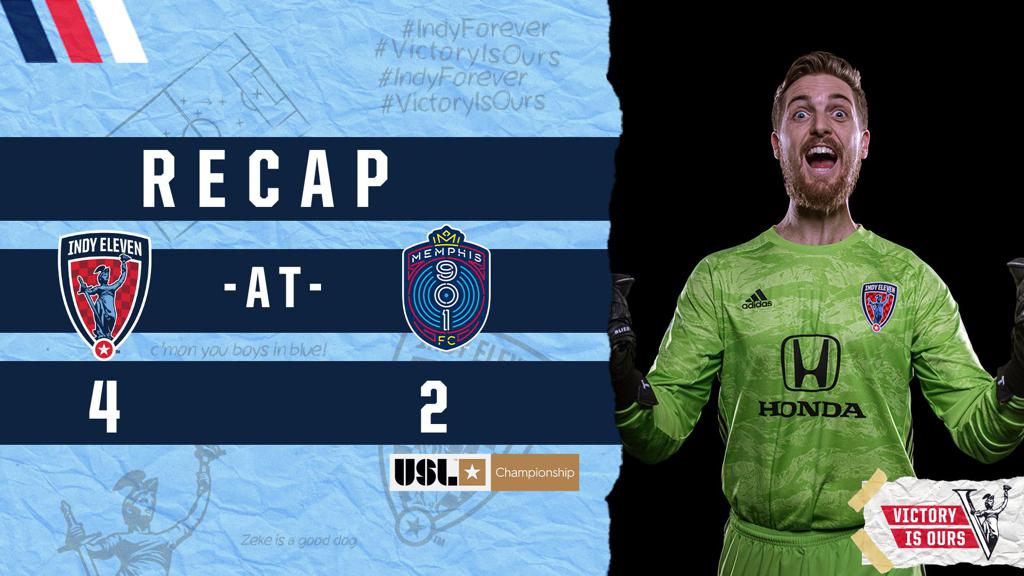 MEMPHIS (Saturday, March 7, 2020) – For Indy Eleven, it wasn’t how it started its 2020 USL Championship opener, it was how it finished it, as the Boys in Blue put four unanswered on the board after spotting Memphis an early lead to post a 4-2 victory at AutoZone Park.

Indy Eleven’s 2019 leading scorer, forward Tyler Pasher, picked up where he left off with equalizing and game-winning goals midway through the second half that were assisted by new strike mate Nick Moon. The wing back tandem of Ayoze and Carl Haworth opened and finished the scoring, respectively, to give Indy Eleven an emphatic road win to start a promising campaign on the right foot after some early adversity.

“I’ve always thought the best team-building event you can ever do is to go and win a game, especially on the road, and that’s what we did tonight. Everybody enjoys winning, and especially a comeback win like that,” said Indy Eleven Head Coach Martin Rennie. “Scoring four goals on the road – I don’t think we’ve done that since I’ve been coaching here. There were a lot of things there tonight that can help bring the team together and obviously we’re just getting started and have a lot to look forward to.”

Memphis struck first, and a bit against the run of early play, nine minutes in through Brandon Allen, who took Pierre Da Silva’s looping ball inside the area and curled a shot into the left side of goal to give the home side the quick advantage. Memphis would double up on the quarter hour, when Zach Carroll got to Marc Burch’s corner kick at the six and buried a low header to push the Memphis lead to 2-0. Indy dodged a bullet off another corner in the 22nd minute, when goalkeeper Evan Newton did well to kick save 901 FC defender Liam Doyle’s eight-yard effort, keeping the visitors within reach.

It was Newton coming up big again just minutes before the half when he used both hands to parry away Memphis striker Duane Muckette’s breakaway attempt from near the penalty spot. That stop would prove big as Indy clawed one back just before the three minutes of added time elapsed via Ayoze, who ran onto Haworth’s square ball at the top of the area and lashed a low, first-time blast to the right post that gave recently unretired Memphis goalkeeper Tim Howard no chance and halved the Indy deficit.

“First of all, full credit to Memphis because they started the game and with a lot of energy, and I think they caught us cold a little bit. They were 2-nil up very early on and showed us things we definitely could improve upon,” Rennie said. “But even at 2-nil down I still felt confident that we would come back and do well in the game, and it was really important to get the goal just before halftime because that gave us a bit of momentum going into the break.

A very active second half began with Indy getting the better chances, first Pasher seeing a low shot flash just past the left post in the 51st minute and Yeferson Contreras having a header saved by a diving Howard a few minutes later. Minutes after coming on for Contreras in the 63rd minute, Moon would rue missing contact on a through ball that put him in alone on Howard, but the Eleven debutant would soon make amends by assisting on a pair of vital goals by Pasher.

The Canadian forward did the heavy lifting himself in the 69th minute, accepting Moon’s through ball at the midfield stripe and racing inside the area before beating Howard low to even things at 2-2. Just three minutes later it was Moon taking advantage of a defensive miscue at the edge of the final third and carrying into the area before playing an early cross to the six, where Pasher easily swept past a stranded Howard to put Indy in the lead at 3-2. In the 83rd minute it was Pasher playing provider, his cross from the left going through the area and meeting the late run of Haworth, who smashed first time from near the corner of the six to give Indiana’s Team a vital insurance tally. Rennie was indeed correct, as tonight’s opening game of Indy Eleven’s seventh season marked the first time the club had scored four times away from home.

“As we came out in the second half thought we improved a lot, had better possession and obviously finished better with three scores, and we could have had even more," Rennie said. "Hopefully this will help us brighten up and start the next game better, and overall we can still take a lot from this game in how we finished it off.”

Indy Eleven will continue its month-long road trip to begin the 2020 USL Championship regular season next Saturday, March 14, when the Boys in Blue travel west to face Sporting Kansas City II. Kickoff from Children’s Mercy Park in Kansas City, Kan., is set for 5:00 p.m. for a match that fans can watch live on ESPN+.