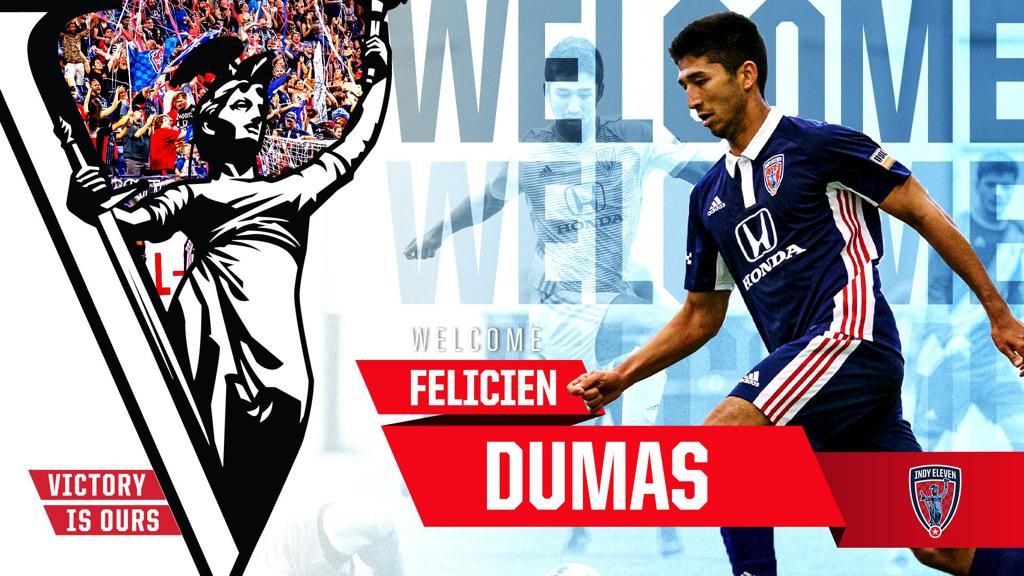 INDIANAPOLIS (Wednesday, June 17, 2020) – With the return of the 2020 USL Championship season drawing closer, Indy Eleven continued its preparations with today’s signing of defender Felicien Dumas. Pending visa approval, the 23-year-old Dumas will become the 25th member of the Eleven roster. Per club policy, financial terms of the contract that brings Dumas to the Circle City will not be disclosed.

While Dumas was selected by Major League Soccer’s New York City FC with the 48th overall selection in last January’s 2020 MLS SuperDraft, the University of Notre Dame alum saw his career prospects continue to blossom in the Hoosier State thanks to a successful preseason stint with Indy Eleven.

“I'm very excited to join Indy Eleven and be a part of an organization that is run extremely professionally from top to bottom,”. Dumas said. “This group of guys made me feel welcome from day one. While our season took a bit of a bump, I have no doubt that we have the depth and potential to bring back some silverware. I'm looking forward to competing on the field again and representing a great organization with great fans.”

Dumas was a mainstay for a successful Notre Dame squad that qualified for the NCAA Men’s College Cup postseason tournament during his four seasons in South Bend from 2016-19. In all, the 2019 team captain and two-time All-ACC Third Team selection posted seven goals and 20 assists in his 60 appearances for the Irish, which he led in assists in each of his last three seasons while playing mostly at left back.

“When you combine his pedigree and his familiarity with both our club and the state of Indiana, Felicien Dumas is a fantastic pick up for us at this point in time,” said Indy Eleven Head Coach Martin Rennie. “Having spent time plenty of time with us in preseason, we know that his comfort on the ball and ability to defend 1-v-1 will fit our style of play quite well.”

Dumas spent his time in high school at the United World College of South East Asia (2015 graduate), where he was named a three-time MVP of the U19 South East Asia Student Activity Conference. The Paris-born Dumas was selected as one of the best amateur players in Singapore, being offered professional contracts by several Singapore S-League clubs and playing with the First XI team in 2013. In addition to his time in Singapore, Dumas has also had trials with Newcastle United (England), Home United FC (Singapore) and Kashiwa Reysol (Japan).

Indy Eleven and the rest of the 35-team USL Championship continue to work towards the resumption of the 2020 season, with a provisional start date set for July 11. Additional information on competition format, scheduling, broadcast and other important details will be made available in the coming weeks, all with strict alignment with all local and state public health guidelines in mind. For more updates on the 2020 season as they are made available, please continue to visit indyeleven.com and uslchampionship.com.