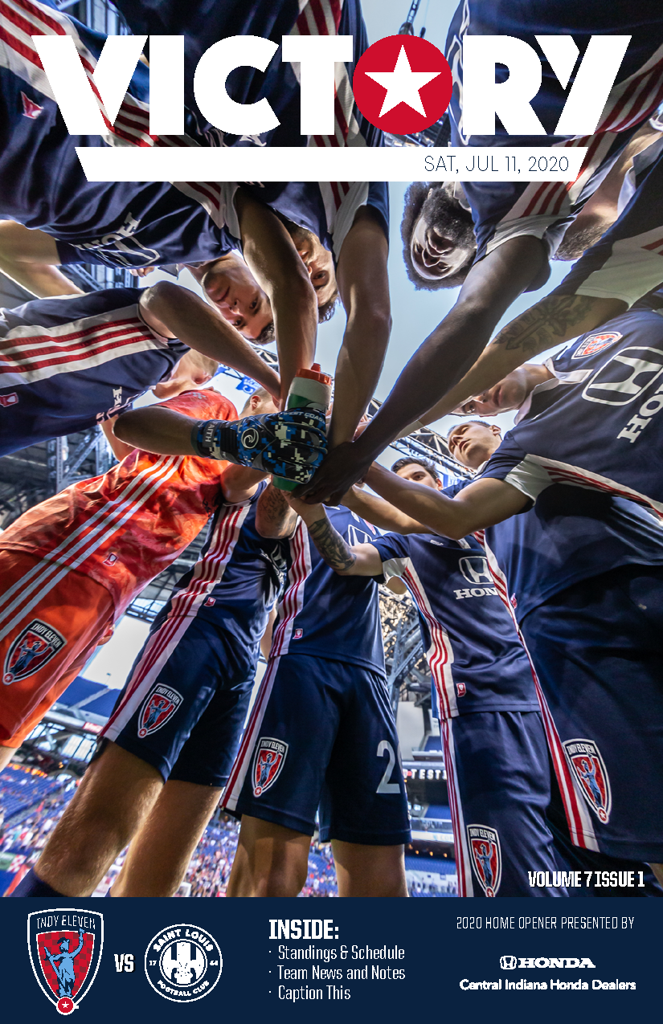 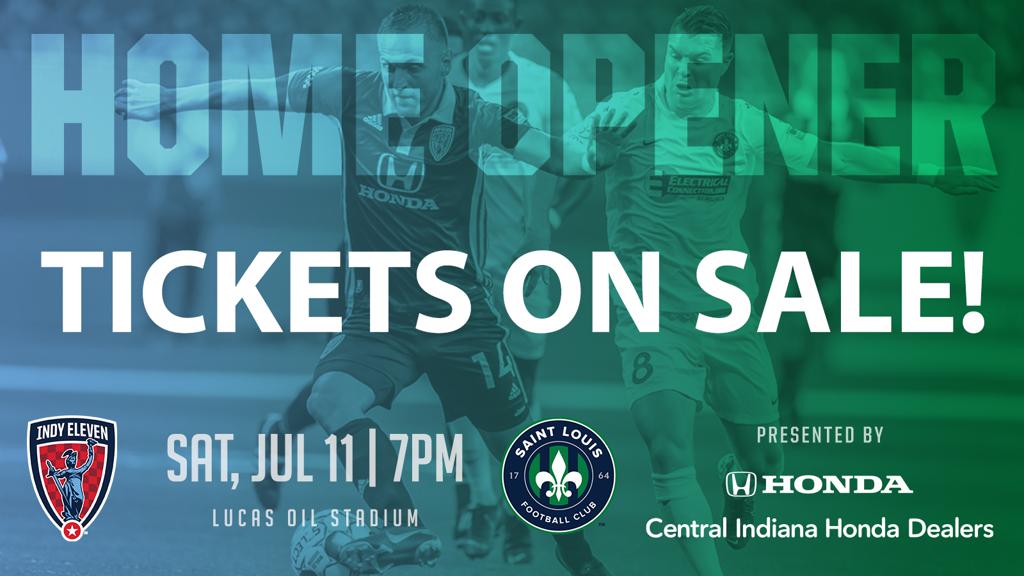 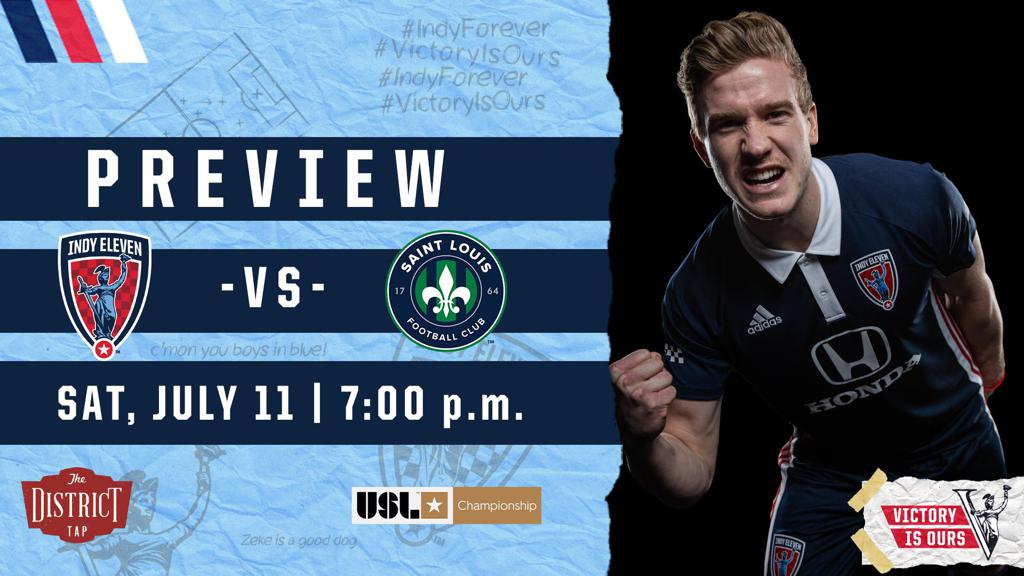 At long last, Indy Eleven will return to the field for the first time in over four months in the club’s 2020 home opener vs. Saint Louis FC, a match presented by Central Indiana Honda Dealers.

“It’s exciting to be back. I think this week’s been fun preparing for a game and actually knowing we have a game,” said Indy Eleven Head Coach Martin Rennie. “It’s kind of like the beginning to the season again I suppose, but even better than that because of all of the uncertainty we’ve had for months.”

Indiana’s Team started the season on the front foot after downing Memphis 901 FC 4-2 on the road in the regular season opener on March 7. Memphis took an early two-goal lead in the first stanza, but Eleven defender Ayoze managed to narrow the deficit after burying a shot from outside Memphis’ penalty box three minutes into first-half stoppage time. That proved to be the catalyst for a comeback in the second half, with forward Tyler Pasher putting two goals past Memphis goalkeeper Tim Howard in the 69th and 72nd minutes, both of which were assisted by newcomer Nick Moon. Defender Carl Haworth hammered in the final nail in the coffin with Indy’s fourth goal of the evening, his first since joining the squad last December, in the 83rd minute.

The 2020 USL Championship regular season came to a grinding halt on March 12 due to the global impact of COVID-19. After months of planning and preparing, Indy Eleven is now set to play the remainder of the 2020 season in a condensed 16-game format, with the league segmented into eight regionalized groups. Indy is joined by Louisville FC, Saint Louis FC and Sporting Kansas City II in Group E, and will surely get to know its nearby rivals extremely well over the next 13 weeks. This is the first of four matches that will be played against St. Louis, two home and two away.

“It’s an exciting group, one of the strongest groups in the league. It gives us a good balance of competitive games, a lot of home games – which is very nice – and fairly well-spaced out games considering how short the season is,” Rennie said. “Overall, I think it’s going to be a good group, one we’re looking forward to.”

Saint Louis FC also found success in their 2020 opener, touting a 4-1 win at home against league newcomers The Miami FC. Much like Memphis, Saint Louis gained an early lead with goals from Kyle Greig (10’) and Russell Cicerone (21’) before conceding one at the edge of the first half. However, a comeback was not in the cards for the visitors, as Tyler Blackwood (77’) and Cicerone (90+2’) tacked on two more for STL. After finishing last year in the first spot out of the Eastern Conference’s 10-team postseason, the strong start was just what Saint Louis needed – especially considering the tough Group E draw that will see only two teams advance to the 2020 Playoffs.

The two-game series against Saint Louis FC last season ended in a split decision, with each side taking the spoils while holding homefield advantage, 1W-1L-0D.

Indiana’s Team traveled to St. Louis for the 2019 season opener last year, falling 2-1 at full time. Neveal Hackshaw opened the game, but one goal would not be enough to get a result after two quick-hitters from St. Louis came in the last 20 minutes of the contest.

Indy welcomed Saint Louis FC to Lucas Oil Stadium for the return fixture on August 18. Fortunes were swapped this time out, with Indiana’s Team deemed the winners by the same 2-1 scoreline. Indy opened the scoring late in the game via substitute striking pair Tyler Pasher and Dane Kelly. Saint Louis spoiled Indy’s chance for a clean sheet when Lewis Hilton collected an unassisted goal at the death.

Defender-turned-forward Nick Moon joined the Eleven in December off the back of a very successful year in USL League One with Lansing Ignite FC. Over the course of 29 appearances, Moon tallied six goals and four assists on 37 chances while recording 157 recoveries and winning 193 of 354 duels, ultimately earning him a spot on USL League One’s inaugural All-League Second Team.

Moon made his USL Championship debut for Indy in the opening match of the 2020 season, arriving off the bench in the 63rd minute and changing the complexion of the match by assisting Tyler Pasher’s equalizing and game-winning goals in the 4-2 comeback victory. The 24-year-old provided a needed spark off the bench in that game, giving Rennie more food for thought when it comes to selections in attack.

Forward Kyle Greig seemed to be the danger man up top for Saint Louis FC last season, collecting seven goals and four assists in 31 appearances. Greig had a knack at being at the right place at the right time in 2019, as he was also first on the team in shots (49) and third in chances created (28).

Greig joined STL in 2018 and has since tallied 20 goals in 62 league appearances. At 6’2” he is a valuable target man that can hold the ball up and create scoring opportunities. He has already bagged once this season, scoring the first goal of Saint Louis’ 2020 campaign in the 10th minute of the eventual 4-1 win vs. The Miami FC.