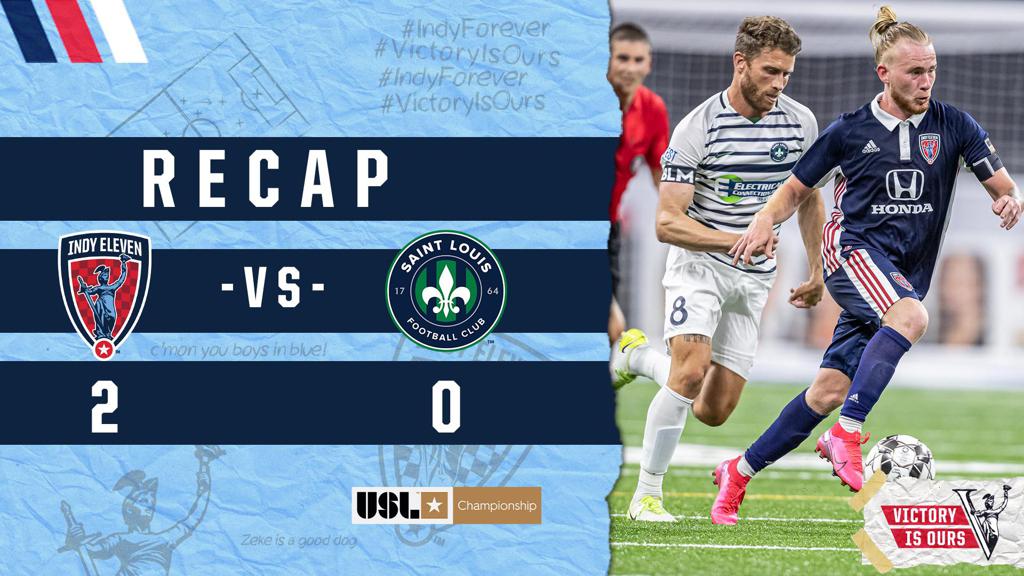 The match marked the first USL Championship fixture in 121 days since the league was suspended back on March 12 and was played in front of an announced crowd of 4,761 fans at Lucas Oil Stadium.

“It’s been a long time coming, so it’s really nice to get a chance to play at home again – and to have fans here to watch it. I think we put together a pretty good game, especially considering all of the challenges we had to endure over the last period of time, just like everybody else has,” said Indy Eleven Head Coach Martin Rennie. “I thought we played the game well, thought we probably could have scored even more goals, especially in the first half, but we managed possession well in the second half. It’s great to get off to a winning start – or to continue winning, since this is the second win of our season.”

Pasher began to put his stamp on the match with a six-shot flurry between the 25th and 40th minutes, a 34th minute blast that banged off the far right post being the most menacing, with three others forcing Morton into saves. Pasher tried to play provider as the first half entered stoppage time, but his cross through the six just eluded a sliding Nick Moon at the far post. While Indiana’s Team held overwhelming advantages in shots (13-8) and shots on target (7-1) across the first 45 minutes, it would still enter the halftime break in a scoreless deadlock.

However, it wouldn’t take long for Pasher to find paydirt in the second half. In the 52nd minute, the Canadian speedster accepted Andrew Carleton’s pinpoint pass from the midfield stripe at the top of the area and beat the last defender 1-v-1 before going between the legs of Morton for the finish and a 1-0 Indy lead. That combo nearly paid off again in the 69th minute, but instead of shooting, Pasher laid off for an on-rushing Moon, whose first-time effort rose over the bar from eight yards out.

“[Pasher] is just a really great threat. If the opponent’s back line is high he can get in behind them, and if they drop deep he can come short and get the ball and turn and go, so he’s just a big threat either way and it’s so hard to defend that. Usually you’ll find there’s players with speed who don’t really have the control and ability to stop and turn, but he’s got the ability to do all that,” Rennie said of Pasher, who has three goals after his first two outings of the 2020 season. “It’s been amazing to see his development over the last couple of seasons. You have to remember that he’s only been playing the position he’s in for one season. He’s doing fantastic at it and I think he can keep enjoying it and keep improving at it, and I think he will.”

Indy Eleven would pad the lead in the 79th minute when the left-sided duo of Ayoze and Hackshaw linked up on a set piece opportunity. From the right flank, the Spaniard Ayoze drove one of his patented left-footed in-swingers to the far post, where Hackshaw had little trouble beating his mark and redirecting past a stranded Morton to double Indy’s advantage.

After giving up a pair of goals early in its season opener at Memphis 901 FC back in March, tonight the collective defensive effort from Indy was its usual stout self in its home environment. Indy would clamp down in the second half, allowing Saint Louis to take just two shots in the stanza, while goalkeeper Evan Newton made four saves on the evening en route to improving his career league lead in the category to 48.

Indy Eleven continues its revamped regular season next Saturday, July 18, with another home contest against a Group E foe, this time against Sporting Kansas City II. Kickoff at Lucas Oil Stadium is set for 7:00 p.m., and tickets for the match are available at www.indyeleven.com/tickets, starting at just $15.