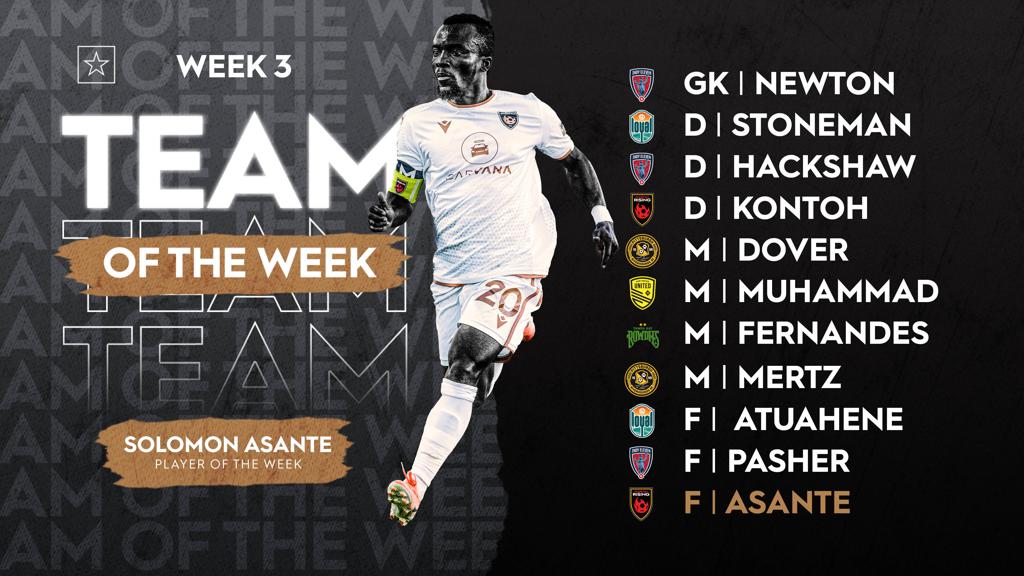 Indy Eleven capped off its strong return-to-play weekend with the announcement that goalkeeper Evan Newton, defender Neveal Hackshaw and forward Tyler Pasher had been voted to the USL Championship Team of the Week in Week 3. The TOTW nods comes after Indiana’s Team secured a 2-0 victory against Saint Louis FC in the first match either club had played in since March 7.

Pasher’s name remained comfortably unchanged on the TOTW lineup, having earned his first appearance in Week 1 after a dominant showing at Memphis 901 FC. The Canadian kept Saint Louis’ backline on its heels Saturday evening by registering nine shots, with six of those between the 25th and 40th minutes. His persistence paid off shortly after the second-half restart, putting a shot between STLFC ‘keeper Kyle Morton’s legs in the 52nd minute to open the scoring, netting in his fourth consecutive game dating back to November 2, 2019 (at Nashville SC). The striker also played part-time playmaker for the evening after registering three key passes to his teammates in the final third.

Newton and Hackshaw earned their first TOTW honors of 2020 after putting in equally impressive shifts in Week 3. Newton recorded a four-save shutout in his second appearance in 2020, adding to his all-time league-leading clean sheet tally (48), saves registered (451) and 65 wins (career record 65W-44L-38D). The Virginia Beach native also completed 23 of 31 passes, including seven of 15 long passes up the pitch.

Attributing to Newton’s success between the post, Hackshaw helped hold down the fort in Indy’s half while also contributing to the attack as well. The 2019 Defender of the Year nominee won 11 of 15 duels and made eight recoveries on the evening, keeping the Saint Louis attack toothless most of the match. Hackshaw had no problem finding his teammates, having completed 52 of 59 passes throughout the night. However, the contribution most fans noted came in the 72nd minute, when the Trinidad and Tobago international headed home a late-game goal to secure the club’s first home win of the season.

Indiana’s Team returns to Lucas Oil Stadium to take on Sporting Kansas City II this Saturday, July 18 at 7:00 p.m. ET. Tickets to the match are available for as low as $15 at IndyEleven.com/Tickets or by calling 317-685-1100. Fans can catch the action at home on ESPN+ and locally on WISH-TV, the official broadcast partner of Indy Eleven.

GK – Evan Newton, Indy Eleven: Newton recorded a four-save shutout as the Eleven took a 2-0 victory against Saint Louis FC, and was solid with his distribution, completing 23 of 31 passes including 7 of 15 long passes.

D – Grant Stoneman, San Diego Loyal SC: Stoneman recorded his first goal in the Championship, and was solid on the back line, completing 90 of 97 passes, winning 3 of 4 duels and registering two clearances as SD Loyal defeated Real Monarchs SLC on the road.

D – Neveal Hackshaw, Indy Eleven: Hackshaw won 11 of 15 duels, made eight recoveries and completed 52 of 59 passes in addition to his late insurance goal that wrapped up victory for Indy against Saint Louis.

D – Owusu-Ansah Kontoh, Phoenix Rising FC: Kontoh was good at both ends of the field, registering three interceptions and five clearances while also notching a pair of key passes in the attacking end.

M – Saalih Muhammad, New Mexico United: Muhammad not only scored a wonderstrike to put New Mexico on top in Colorado Springs but was sharp throughout while completing 44 of 49 passes and winning 5 of 6 duels and aerial duels overall.

M – Robbie Mertz, Pittsburgh Riverhounds SC: The Pittsburgh native scored what proved to be the game-winner in the Hounds’ big road win against Louisville City FC.

F – Francis Atuahene, San Diego Loyal SC: Atuahene scored both goals on four shots overall as SD Loyal took its first victory in club history in the lone game of Week 2 prior to the season suspension against Tacoma Defiance.

F – Tyler Pasher, Indy Eleven: The Canadian scored in his fourth consecutive game dating back to 2019 and recorded nine shots and three key passes overall in the Eleven’s 2-0 victory against Saint Louis FC on Saturday.