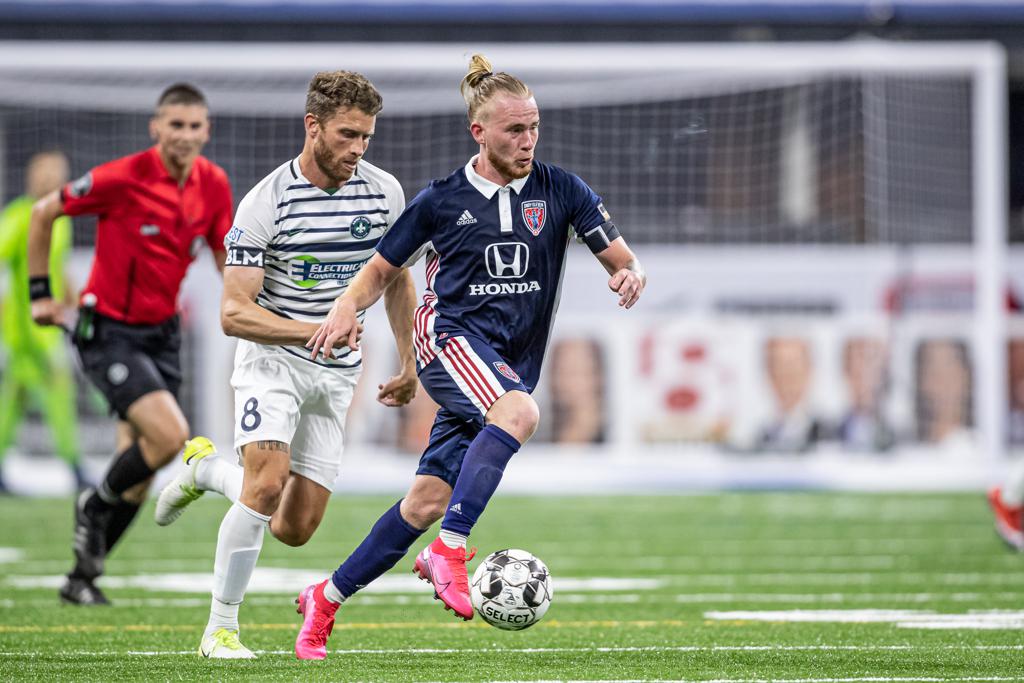 Each week in 2020, IndyEleven.com’s Spencer Sharpe will give his three takeaways from the performance of Indiana's Team. This week's edition comes after Indiana's Team's 2-0 victory vs. Saint Louis FC in Week 3 of the USL Championship season.

Carleton Given the Keys

Eleven forward Andrew Carleton gave fans a glimpse at his promise against Saint Louis last Saturday, operating as a true number 10 through the match, a position that been constant variable in previous seasons. It was Carleton’s 40-yard pass that led to the team’s first goal, an immaculate banana-curve through ball that striking partner Tyler Pasher latched onto and buried in the back of the net for the game’s first goal on the stroke of 51st minute. Carleton set up another good chance in the 69’ by again playing in Pasher down the left, whose square ball into the box was teed up over the bar by Nick Moon.

Having struggled in his debut back in March, Saturday was a good benchmark of the talent Carleton, who is currently on loan from Atlanta United FC (MLS), possesses. Carded early (13’) against Memphis, he was eventually subbed off before the team’s historic comeback began. The 20-year-old completed almost 80% of his 18 passes against Memphis. On Saturday, while his accuracy dropped nearly 10 percent, he was much more involved with 26 total passes and two chances created, which included his aforementioned jaw-dropping assist.

Carleton was lively all match, popping up anywhere on the pitch to receive the ball. In a high-octane offense such as Indy’s, it’s an essential role to fill. His ability to positively link-up defense and attack from the middle of the park allowed Pasher and Moon to focus solely on goal-scoring, which paid off clearly. When Carleton got the ball, he looked to quickly move it forward, rarely playing a sideways pass. His influence will be key for an Indy team looking to provide a more consistent attack than last year’s respectable but middle-of-the-conference output of 48 goals.

By the time of his substitution at 70’, Carleton had run himself ragged, putting in a shift on both ends of the pitch. There’s some real energy and chirpiness in his style of play, which endeared him to the home crowd. He went off to the applause of his newfound supporters, who will be hoping his intensity remains throughout the rest of the 2020 campaign.

It goes without saying, but Tyler Pasher remains the focal point of the Indy attack, collecting his third league goal of the season Saturday night. Combining speed, footwork and a great shot, Pasher unloaded on the Saint Louis defense, scoring his goal and putting another FIVE shots on target, one of which beamed off the far post. He also created three other chances for his teammates, ultimately earning him one of Indy’s three spots on the league’s Team of the Week in Week 3.

His rapport with Carleton will also be something to keep an eye on the. The two attackers shared some banter on Twitter after the match, so clearly there is confidence in that relationship out on the pitch. It’s a camaraderie that will need to continue flourishing as the season progresses.

Since arriving in the Circle City in 2018, Pasher has become one of the top players in the USL Championship. He scored 13 goals last season (35 appearances) along with completing 80% of his passes and his form looks to have carried over to 2020. With Moon and Carleton on the pitch, Pasher will have a lot more freedom to make runs into the box along the left flank, something he did all match versus Saint Louis.

It's a Team Effort

While Pasher made the biggest splash going forward on Saturday, the whole team was quite involved in attacking play. Based on average positioning, Indy had only three players – Paddy Barrett, Karl Ouimette and Tyler Gibson – that weren’t across the midfield line, and even they weren’t strangers to the final third. On one of Barrett’s few ventures forward, he came close to scoring with a supreme 40-yard strike that stung the palms of STL ‘keeper Kyle Morton, while Gibson found himself with space 15 yards from goal just minutes later.

Head Coach Martin Rennie’s 3-5-2 stresses involvement in the final third from the wingbacks, which was prevalent the entire match. Between the pair of Ayoze and Carl Haworth, six chances were created, with Ayoze’s 79’ free kick connecting with defender Neveal Hackshaw at the far post to seal the game. For most of the night, Ayoze operated as a second winger, overlapping the runs of Pasher, who tucked further inside. The Spanish fullback also completed four crosses.

This system – and four months’ worth of pent up energy – allowed Indy to pin Saint Louis back almost straight from kickoff. Indiana’s Team had a flurry of chances in the opening, putting four shots on target inside the first quarter of an hour. That pace would continue for the remainder of the match as the squad registered nine of its total 19 shots on target, five of those coming from the goal-scorer extraordinaire Pasher.