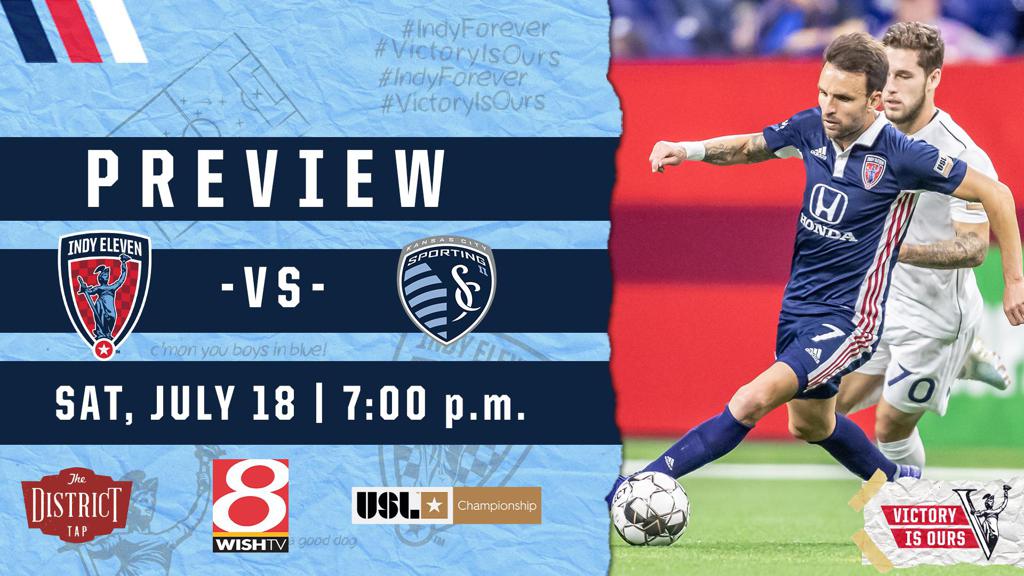 The long delay of the season did not seem to effect Indy Eleven, as the team powered through Saint Louis FC last Saturday, 2-0. Although Indiana’s Team peppered the opposing goal right from the start, it took until after the break for the first goal, a lovely 52nd minute effort from Tyler Pasher in the box. Defender Neveal Hackshaw secured Indy’s victory 17 minutes later by way of a close-quarters header off service from fellow defender Ayoze. Last Saturday’s win pushed Indy’s regular season home undefeated streak to 26 matches (19W-0L-7D) under head coach Martin Rennie, a record dating back to a 2-1 win over Charlotte Independence at Lucas Oil Stadium on July 7, 2018.

The squad will look to keep that momentum rolling into this week’s match against Sporting Kansas City II in what will be the first of the Kansas team’s four visits to Lucas Oil Stadium this season. Sporting Kansas City II – formerly known as Swope Park Rangers – have played just one match so far under its new moniker, a 2-1 loss to Charlotte Independence in the opening weekend of the 2020 USL Championship season back on March 8. Sporting KC II will likely hand the keys to its youth and academy players as many of the first team contenders are currently contained within “The Bubble” at the MLS is Back Tournament in Orlando, Fla. Though the squad’s average age hovers just over 20-years old (20.91 to be exact), Sporting KC II head coach Paulo Nagamura has enough firepower on the roster that could do damage to unsuspecting clubs hoping for an easy win.

The series history between Indy Eleven and Sporting KC II contains just last season’s results, a pair of victories for Indiana’s Team. USL Championship career scoring leader Dane Kelly scored twice in both games against SKC last season, pacing Indy to a 3-1 win at Children’s Mercy Park on April 15 and a 2-1 triumph in the squad’s season-finale on Oct. 16 – the last game in which SKC would perform under its former Swope Park Rangers identity.

Thanks to the unbalanced schedule provision in place this season, Indy will also host the remaining three games in the season series on Aug. 1, Sept. 9, and Sept. 30 – the latter marking Indy’s regular season home finale.

Don’t let their position title fool you ... defenders Carl Haworth and Ayoze are possibly the two most important individuals in facilitating Indy’s attack. Each has enjoyed positive starts to the 2020 USL Championship season and have the stats to prove it – both players have grabbed one goal and one assist from 180 minutes of play thus far, with Haworth assisting Ayoze’s opener against Memphis back in March. Haworth got himself on the scoresheet in the same match, scoring Indy Eleven’s fourth goal in the 4-2 comeback victory.

Ayoze got his first assist of the season in last Saturday’s home opener against Saint Louis, a left-footed in-swinging dead ball from the right flank that met Neveal Hackshaw’s head at the far post. Together, the pair have also contributed nine key passes in the two matches so far and place in the league’s top 20 in the category in the early going. Ayoze also leads the team in total passes (129) and has completed a tick over 81% of them.

The freedom Ayoze and Haworth have in getting forward has been a focal point in Indy’s game plan. By overlapping the inside runs of forwards Pasher and Nick Moon, the fullbacks are getting into dangerous areas to whip in crosses.

Although SKC failed to score against Charlotte (Sporting’s notch on the scoreboard in the 2-1 loss came via an Indepedence own goal), it was not toothless in the attacking third. Forward Fredinho Monpremier got himself involved as much as possible, creating three chances and taking two shots (one on target).

The Haitian striker also brought his teammates into the match, completing 82% of his 39 passes, including 11/15 going forward with the ball. Monpremier will have to carry much of the attack as his striking counterpart Ze Pedro was released from the club on July 2.