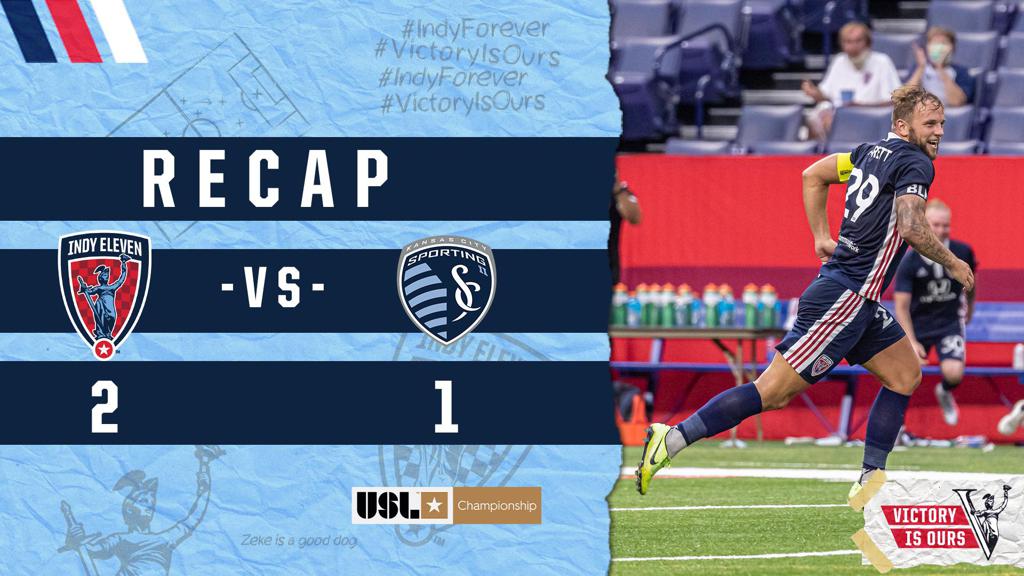 Indy Eleven continued its stellar return to play in 2020, using goals by in-form striker Tyler Pasher and captain Paddy Barrett to post a 2-1 win over fellow Group E foe Sporting Kansas City II. The game-winner for Barrett marked the center back’s first goal of the season, while Pasher claimed sole possession of the top spot on the USL Championship’s goal-scoring chart with his fourth goal of the young campaign.

The win for Indy Eleven (3W-0L-0D, 9 pts.) was its tenth consecutive home victory in regular season action at Lucas Oil Stadium, a stretch that began last July 20. The three-point result also extended the third longest home undefeated streak in USL Championship history to 27 games (20W-0L-7D), a run that exceeded the two-year mark back on July 7.

From the onset of the match it was Indiana’s Team applying most of the pressure, its first chance coming in the opening minute when Pasher’s shot was blocked after he sprinted onto Andrew Carleton’s ball down the left. Sporting wasn’t totally bereft of chances early on, but saw a pair of efforts go over frame in the 4th and 8th minutes.

Indy Eleven were forced into an early change, as Ayoze had to be subbed off after picking up an 11th minute injury. He was replaced by 2019 USL League One Defender of the Year Conner Antley, who marked his official Indy Eleven debut by slotting into the departing Spaniard’s position at left wing back.

The front trio of Carleton, Pasher and Nick Moon linked up smartly in the 17th minute, playing three quick passes between them before Pasher forced a save out of SKC ‘keeper Brooks Thompson, the 18-year-old native of Floyds Knobs, Ind., who was making his second pro start. Carleton’s continued activity in the final third eventually drew a foul and a dangerous free kick opportunity tin the 35th minute, but defender Carl Haworth curled the ensuing dead ball just high.

Indy Eleven finally broke the deadlock on the stroke of 39 minutes. Moon used some fancy footwork to break forward into the box before letting a strike rip that Thompson could only parry. The ball fell into the path of Pasher, who coolly slotted home for his league-leading fourth goal of the current USL Championship campaign. It marked the fifth straight game in which the Canadian striker hit the back of the net, dating back to last year’s Eastern Conference Playoffs Semifinal at Nashville SC.

The second 45 minutes was a tenser affair and started when SKC forward Wilson Harris dragged his 46th minute shot just wide of Indy goalkeeper Evan Newton’s left post. Indy responded three minutes later through Pasher’s venomous shot at Thompson that was well-saved. Carleton had himself a great chance in the 52nd minute, hitting a winding shot off the half-volley that was also saved.

Sporting KC II would answer right back, this time with the equalizing goal in the 53rd minute. The often dangerous Fredinho Mompremier squeezed a perfectly weighted through ball between Barrett and Newton that allowed Harris to round the Indy netminder and finish on an open frame, leveling the score at 1-1.

Sporting’s counter-punch immediately gave the Eleven attack some added urgency. Moon came inches away from his first Indy goal in the 57th minute, sending a header crashing off Thompson from just three yards out. While the SKC ‘keeper didn’t know much about it, his reaction prevented a sure goal, pushing it up into the bar before seeing the danger cleared by a defender on the goalline.

The deadlock was broken by Indy once again through a sublime effort from the captain Barrett in the 67th minute. The defender received a neat layoff from sub Ilija Ilic in the box, which the Irishman curled first time past Thompson for a 2-1 advantage.

With 20 minutes to go, Indy looked to increase the tempo of the match. Successive shots from Pasher and Lindley sprang Thompson into action to keep the score at 2-1. Pasher even lent a hand on the defensive front, chasing down the striding Duval Wapiwo and clearing a dangerous chance out for a corner, which SKC wasted.

Kansas City had an extremely dangerous opportunity in the 84th minute, but Newton made himself big to block Wapiwo’s effort as he tried to round the goalkeeper. Mompremier followed the save with a cracking strike from the rebound that found itself careening into the stands.

At the end of the 90, the ref introduced eight more minutes of stoppage time, but some stout group defending inside and around the Eleven penalty area allowed the home side to stave off the SKC comeback and grab the full three points.

Next up for Indy Eleven comes its first two road games of the USL Championship’s restart phase, beginning with a massive Wednesday evening affair against Pittsburgh Riverhounds SC. The 7:00 p.m. kickoff will air exclusively nationwide on ESPN2. Following that, Indiana’s Team will head to the Gateway of the West for a pivotal showdown with Group E contender Saint Louis FC next Sunday, July 26. Kickoff is set for 5:00 p.m. for the contest that will air locally on MyINDY-TV 23 and nationally on ESPD Deportes and ESPN+.

Indy Eleven’s next two home contests come back to back on Wednesday, July 29, and Saturday, August 1, versus Hartford Athletic and Sporting Kansas City, respectively. Tickets are available for both 7:00 p.m. kickoffs at Lucas Oil Stadium by visiting indyeleven.com/tickets or calling 317-685-1100.