PREVIEW | Indy Eleven on the Road to Pittsburgh Riverhounds 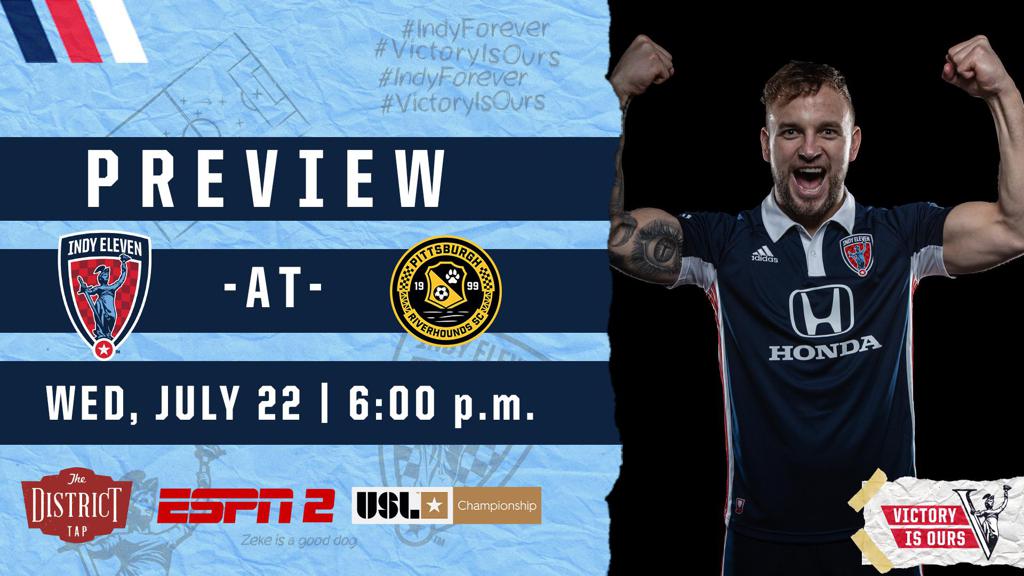 It’s an early-season showdown deserving of a national audience – and that’s just what Indy Eleven and Pittsburgh Riverhounds will have, courtesy of ESPN2, when they meet Wednesday evening near the confluence of the Steel City’s famed three rivers.

The contest features two of the three highest scoring offenses in the 35-team USL Championship through four weeks of action, Pittsburgh’s nine goals placing second, followed by Indy with eight. Eleven forward Tyler Pasher paces the league with four goals, while Riverhounds SC attacker Kenardo Forbes paces the USLC in assists with four helpers of his own.

“Pivotal” might be too heightened a term this early in a season for a game featuring two teams sitting atop their respective groups with spotless records. However, their form out of the gates have Indy and Pittsburgh as the East’s teams to beat in 2020 (don’t take our word ... USLChampionship.com’s Nicholas Murray have Indy #1 and PIT #3 in the latest Power Rankings), which makes their first of two meetings during the shortened 16-game campaign one likely to be circled for end-of-the-season reviews come October.

Of the 17 Championship squads with at least three games under their belts, Indy Eleven is the only one to start off with three victories. A win Wednesday would not only make Indiana’s Team the first in the USLC to reach double-digit points, but it would also end Pittsburgh’s 25-game home undefeated streak in regular season play – a figure Indy might be in awe of were it not for the fact it’s similar run does the Riverhounds two better at 27.

Indy Eleven will look to even its all-time regular season series with Riverhounds SC, its record currently standing at 1W-2L-2D (6 GF/9 GA) after meetings across the 2018 & ’19 USL Championship campaigns.

Pittsburgh also had the leg up in their Lamar Hunt U.S. Open Cup meeting last season, a Third Round affair the Riverhounds took via a 1-0 score at Highmark Stadium on May 29. Indy Eleven exacted a bit of revenge just three days later with a dramatic 2-1 win at Lucas Oil Stadium, while Pittsburgh took the return leg in regular season play via a 3-0 scoreline back in the Steel City in September.

Despite not being grouped together, the close proximity of the two growing rivals has them playing twice during the shortened 2020 season, with Indy Eleven set to host Riverhounds SC in the Circle City on August 15.

We’ve noted the voracity of the Riverhounds attack, which means the Eleven back three – anchored by the Irish captain Paddy Barrett in the middle – will likely be under sustained pressure. Expect Barrett and the Indy defense to be up for the challenge, as the squad has conceded just once in the last 254 minutes of play after a two-goal hiccup in the first 16 minutes of the season opener at Memphis 901 FC. Pittsburgh will also have to account for Barrett in the opposite final third as well, as his deft finish in last Saturday’s 2-1 win over Sporting Kansas City II was preceded by eye-opening long-distance efforts in each of the last two outings.

The 2019 USL Championship MVP finalist and All-League First Team performer was a thorn in the side of Indy last year, as he notched a late game-winner in their Lamar Hunt U.S. Open Cup fixture in May and tallied twice in a 3-0 win late in the regular season. The veteran Jamaican playmaker is continuing his assault on opposing goals in 2020, already notching four assists – including a trio in last Saturday’s 6-0 drubbing of Philadelphia Union II. With five chances created and three successful crosses in just two matches, Forbes has entered the restart in midseason form and will once again need to be the focal point for Indiana’s Team all over the field.