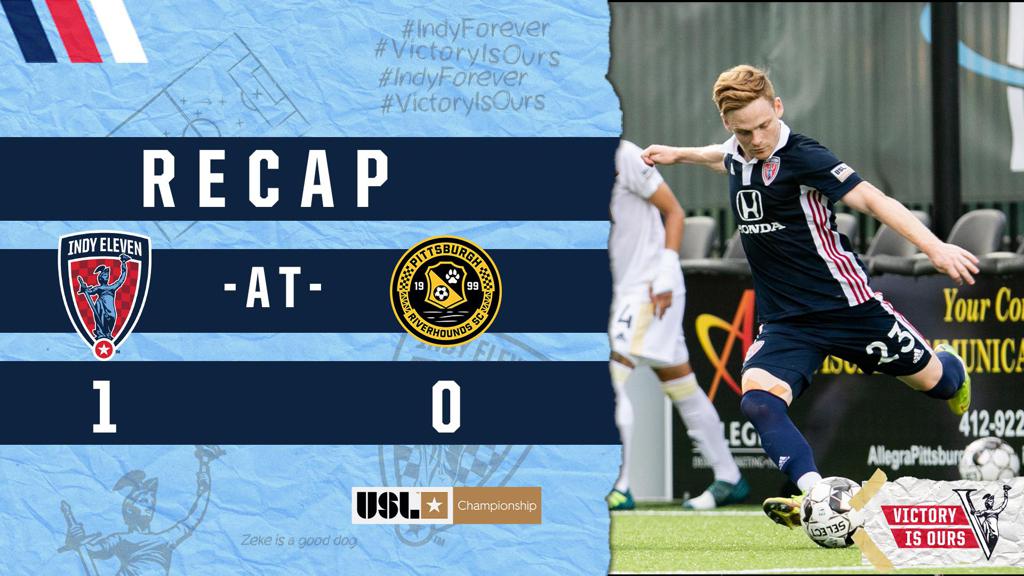 PITTSBURGH (Wednesday, July 22, 2020) – It appeared that Indy Eleven would settle for a share of points from its highly-anticipated contest at Pittsburgh Riverhounds SC – until striker Tyler Pasher rewrote the script with a dramatic strike from distance at the death that gave Indiana’s Team a 1-0 triumph at Highmark Stadium.

With the win, Indy Eleven (4W-0L-0D. 12 pts.), not only maintained its spotless record to start the 2020 USL Championship campaign, it snapped Pittsburgh’s (2W-1L-0D, 6 pts.) 25-game home undefeated streak in regular season play, the fourth-longest stretch in league history (behind Indy’s current 27-game streak that is third in USLC annals).

“I think it was a great performance for us tonight. Again, you got to see our fitness and resiliency, and I thought we controlled large parts of the game, especially considering we were away from home against a team that had not lost a game at home in at least two years,” said Eleven Head Coach Martin Rennie. “It was a difficult game in the sense of it’s quite a tight field, there’s lots of contact and not a lot of opportunity just to relax and play. So given what we were faced with I thought our players executed perfectly.”

Pasher’s fifth goal of 2020 extended his lead atop the 35-team USL Championship’s Golden Boot scoring chart and improved his scoring streak to six consecutive games when accounting for Indy Eleven’s run in the 2019 postseason. With the tally, Pasher also became the first player in Eleven history to score in four straight regular season contests.

“Those are the moments that are just really, really fun to be a part of,” Rennie continued. “When you are on a team or part of a staff and you see a goal that, in that minute, against obviously a very good team, it’s probably a highlight moment for Indy Eleven as a franchise. Tyler’s got the ability to do that, so it’s great to see him come through.”

In what could be classified as a tight contest throughout, the first danger presented itself after 10 minutes when Pittsburgh forward Ropapa Mensah saw two crosses from the right flank go wanting, the first a foot too heavy for Kenardo Forbes’ far-post run and the second forcing a lunging stab by Ryan James that missed left of frame.

On the 15th minute, Pittsburgh defender Skylar Thomas continued the home team’s offensive flurry, his header from 10 yards out off a corner flashing just wide left as well. Looking to stem the tide, Indy center back Paddy Barrett tried to carry over his attacking flair from recent games with an audacious look from the opposite side of the midfield stripe, the attempt to catch Riverhounds goalkeeper Tomas Gomez off his line drifting just high.

The 27th minute saw plenty of drama inside the Indy penalty area, starting when Eleven ‘keeper Evan Newton went low to come up big on Robbie Mertz’s blast set up by a give-and-go with Mark Forrest. Controversy reigned on the ensuing corner kick, which saw Kenardo Forbes’ redirect from the corner of the six ring off the underside of the crossbar, off the goaline and again off the crossbar before landing in the grateful arms of Newton. Despite pleas for a goal, center referee Eric Tattersall listened to his assistant who vigorously waved off any confirmation of a score, the two sides playing on from their scoreless stalemate as the half hour approached.

The meaningful chances dried up as the half waned until deep into six minutes of stoppage time, when Indy Eleven defender Karl Ouimette had an open header at the six off of Tyler Pasher’s set piece service, only to see the chance sent right to Gomez on his line.

The second half was a largely disjointed affair, spent mostly in the middle third and in search of a badly needed spark outside of five yellow cards – and even those were devoid of much venom, apart from Mensah’s unneeded challenge against Newton on an aerial ball in the 82nd minute.

Neither team had a moment of true attacking danger in the half until the allotted six minutes of stoppage had expired. Indy’s last-gasp counter started with Neveal Hackshaw’s clearance from the Eleven penalty spot and continued when Drew Conner played a ball into midfield towards substitute striker Jeremy Rafanello, whose challenge led to Pasher collecting the ball. A 50-yard run, one cut centrally from the right flank and three dusted defenders later, Pasher set himself up on his preferred left foot for a 25-yard lash into the upper left corner that beat Gomez’s full extension, making Indy the first team to reach double-digit points in the 2020 USL Championship season.

Indy Eleven will stay on the road for its next match this Sunday, July 26, when Indiana’s Team heads to the Gateway of the West to meet fellow Group E foe Saint Louis FC (2W-1L-0D, 6 pts.). Kickoff is set for 5:00 p.m. for the contest that will air locally on MyINDY-TV 23 and nationally on ESPN Deportes and ESPN+.

Indy Eleven’s next two home contests come back to back next Wednesday, July 29, and Saturday, August 1, versus Hartford Athletic and Sporting Kansas City II, respectively. Tickets are available for both 7:00 p.m. kickoffs at Lucas Oil Stadium by visiting indyeleven.com/tickets or calling 317-685-1100.