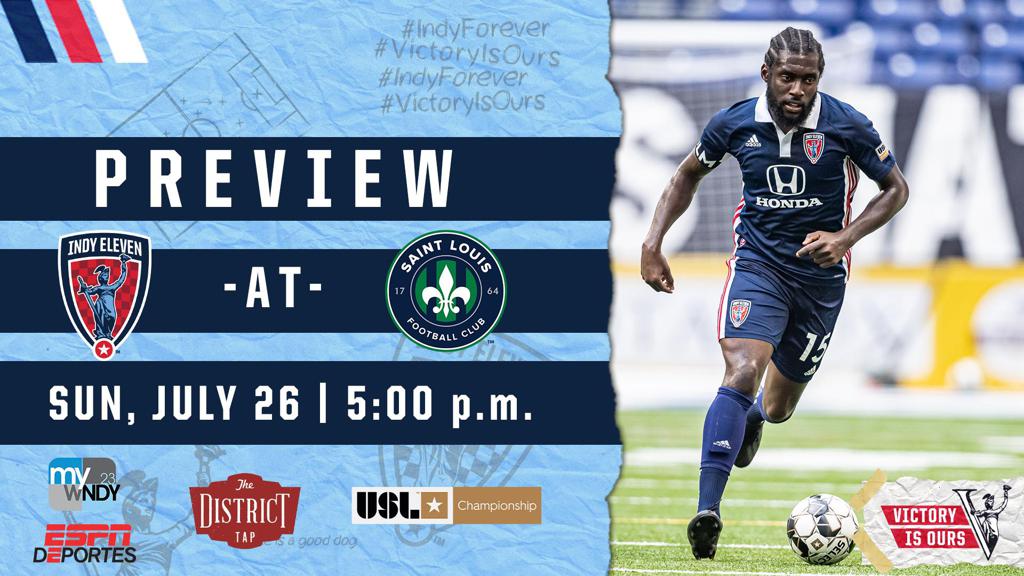 Thanks to a screamer at the death from forward Tyler Pasher Wednesday evening, Indy Eleven snapped Pittsburgh Riverhounds’ home unbeaten streak (dating back to July 2018), winning 1-0 in a gritty back-and-forth match at Highmark Stadium. On Sunday, Indy travels again for the second time this week, this time to Saint Louis as it looks to continue its perfect run (4W-0L-0D) in the second of four 2020 meetings between the two clubs.

Indy emerged victorious in its return-to-play debut against Saint Louis, a 2-0 win at home in which Indiana’s Team dominated the proceedings for 90 minutes. Though the first half remained scoreless – not without its fair share of chances – Indy managed to break the deadlock in the 52nd minute, Pasher beating a STLFC defender 1-v-1 before slotting in the leading goal, a play preceded by a cross near the center circle by Andrew Carleton. Indy padded the lead in the 79th minute, an in-swinging dead ball from Ayoze was nodded into the net by Neveal Hackshaw at the far post for the win.

Saint Louis will enter this match off the back of a 1-0 win over Louisville City FC last weekend, with forward Tyler Blackwood grabbing the lone goal for his side in the 52nd minute. Heading in to the Week 5 weekend, Blackwood and midfielder Russell Cicerone lead the STLFC scoring charge with two goals apiece in the last three contests.

Series History
Thanks to its victory just two weekends ago at Lucas Oil Stadium, Indy Eleven now holds a 2W-1L-0D advantage in its all-time series with Saint Louis FC. Indiana’s Team won that first of four 2020 meetings 2-0 back on July 11, looking the better of the two sides throughout and using second half goals by Tyler Pasher (52’) and Neveal Hackshaw (79’) to secure the full three points.

After a pair of early meetings, the Group E foes will not renew acquaintances until the final weeks of the season, with Indy set to host on Sept. 23 before traveling west to end the regular season at West Community Stadium on Oct. 3.

The two-game series last season ended in a split decision with both sides holding court at home via 2-1 results. Saint Louis won both sides’ 2019 season opener on March 9 before Indiana’s Team returned the favor at Lucas Oil Stadium on Aug. 18.

Indy Eleven Player to Watch: DF Neveal Hackshaw
With Ayoze out of Wednesday’s game and newcomer Conner Antley stepping in the fill the gap, it was Neveal Hackshaw who has provided a constant presence along the left. Being one of three players on Indy’s roster to put in 90-minute shifts in each game this season, Head Coach Martin Rennie will likely look to the 2019 USL Championship Defender of the Year nominee to hold down the back line heading in to the weekend.

Hackshaw has continued to be a key player in Indy’s defensive build so far in 2020, and Wednesday’s 1-0 win at Pittsburgh was no exception. The Trinidad and Tobago international was well acquainted with the ball, claiming a team-high 82 touches throughout the evening, making him a central hub for distribution along the left flank with 56 passes to his name. Against a close-knit Riverhounds attack, Hackshaw’s situational awareness played a major role in Indy walking away with a clean sheet, having gained possession nine times, made three interceptions and a single block that eventually led to snapping the host’s home undefeated streak.

Hackshaw’s performance last outing only added to his team-leading stats record, including: most duels won (32), most blocks (5), a three-way tie for most interceptions (7) and a top Eastern-Conference pass tally (265). Another stat the goes in favor of the steady left center back in particular for this weekend? Hackshaw hass tallied in two of three games against Saint Louis since joining Indy in 2019.

Saint Louis FC Player to Watch: GK Kyle Morton
Kyle Morton was potentially the only person who kept the last meeting between these clubs a tight match as the Saint Louis stopper made a number of big saves within the first 20 minutes, including a long-range effort from Paddy Barrett that Morton was able to palm away. Morton was called into action several more times throughout the match and although he was beaten twice, he was one of the top performers for Saint Louis that night, commanding his area strongly and even winning an aerial duel.

His total of 13 saves this season ranks third in the league through three matches, and over half of that tally came in the match against Indy on July 11. Up against an Eleven attack that has scored nine goals in four matches, Morton will likely once again be a busy man between the sticks.