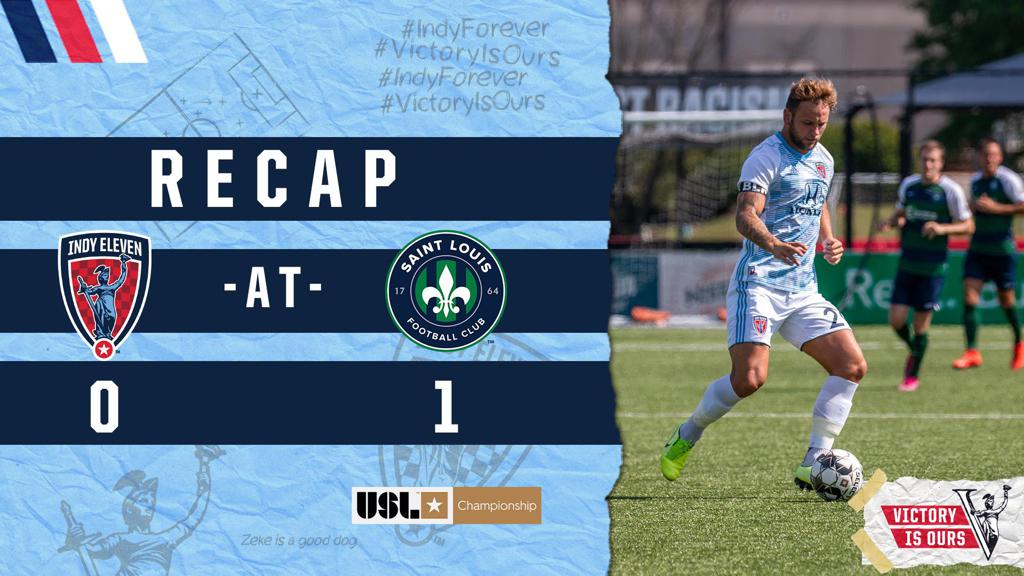 Coming off the heels of a game four days prior, Indy Eleven’s perfect start to 2020 came to an end at the feet of Saint Louis FC forward Tyler Blackwood at West Community Stadium, 1-0. The first defeat of the Eleven’s campaign did not come without a fight, as Indiana’s Team posted advantages of 19-2 in shots and 7-1 in shots on goal over the home side on the day.

With the loss, Indy Eleven (4W-1L-0D. 12 pts.), still remains on top of the Group E standings, a position it will look to hold as the team enters another two-game stretch in Week 6.

“Overall, the performance was strong, we had quite a few chances early in the first half," said Indy Eleven Head Coach Martin Rennie. "The goal that we lost, we’re disappointed in that because there’s a lot of things there that we could’ve done better, so we can learn and improve from that. Sometimes you come up a little short, but usually if you learn from those couple things that you can do better, you come back stronger. That’s the way we’re looking at it.”

Under the beating sun in the Gateway City, the first action of the evening came three minutes in. Eleven midfielder Cam Lindley fed an in-swinging dead ball to the top of the six-yard box that Karl Ouimette managed to get a foot on, but lacked enough force to push past STL ‘keeper Kyle Morton. Indy forward Nick Moon returned to the right of the attacking third, firing a low shot to the near post that Morton quickly came down on.

Indiana’s Team continued to test the Saint Louis (3W-1L-0D, 9 pts.) backline in the 13th minute when defender Neveal Hackshaw picked out his defending counterpart Conner Antley along the left edge of STL’s box. Antley fed another quick pass to Andrew Carleton at the top of the box for a shot, but the 20-year-old’s effort was chipped up by a defender for Morton to save once more. Another four minutes passed before the active Carleton returned atop of the left STL box with another shot on frame, a bouncing effort from distance that made for an easy save by Morton.

Despite Indy’s numerous attacking opportunities, it was Blackwood that opened the scoring in the 24th minute. A quick Saint Louis free kick near the center circle saw midfielder Wal Fall play a quick pass forward through a gap in Indy’s backline. Rounding to the left, the ball found the stride of Blackwood, who caught up with it inside the 18’ for a shot placed to the far side netting.

Indy came up big with one last big chance two minutes into first-half stoppage time, when Carleton dribbled through a group of opposing players for a shot near the top-left of STL’s penalty area, but Morton held his ground just off the line as the ball dipped to his gloves. The whistle blew shortly after, seeing Indiana’s Team down a goal at the break.

It wasn’t long after the second-half restart until Indy moved in for another attacking opportunity, Hackshaw again with another chance-creating pass from the center to forward Jeremy Rafanello. From wide right of goal, Rafanello danced between defenders for a shot from distance, but a deflection sent the ball skipping into Morton once more.

The action remained contained until the clock ticked just over the hour mark as Blackwood sent a pass skipping across Indy’s goal, unable to find teammate Russell Cicerone near the 6’ to double the lead.

Indy nearly closed the deficit in the 63rd minute when a Saint Louis giveaway gifted midfielder Cam Lindley possession in the attacking third. Lindley made a quick forward dribble before laying off to Rafanello for a heavy shot near post that Morton palmed down and quickly recovered before the ball spun over the line.

Both teams continued to put in physical performances, keeping the ball limited to the center circle until a challenge saw Indy awarded a free kick opportunity almost 25 yards out in the 85th minute. Lindley stepped up and blasted the dead ball into the STL wall, the deflection opening another opportunity this time for captain Paddy Barrett to send a shot curling just wide of the far post.

Indiana’s Team mustered one more chance three minutes into the final five minutes of stoppage time. A chain of passes from late-game substitutes Tyler Pasher and Felicien Dumas found Barrett near the top of the box for another curling shot which ended wide right of the post. The final few moments eclipsed and Indy’s perfect start to the 2020 USL Championship season came to a close at the hands of second-place Saint Louis FC, which slashed Indy’s Group E lead in half to three points.

Indy Eleven returns to the Circle City for its next two home contests starting this Wednesday, July 29, versus Hartford Athletic. The squad will have a few days to prepare before hosting Sporting Kansas City II on Saturday, August 1. Tickets are available for both 7:00 p.m. kickoffs at Lucas Oil Stadium by visiting indyeleven.com/tickets or calling 317-685-1100.