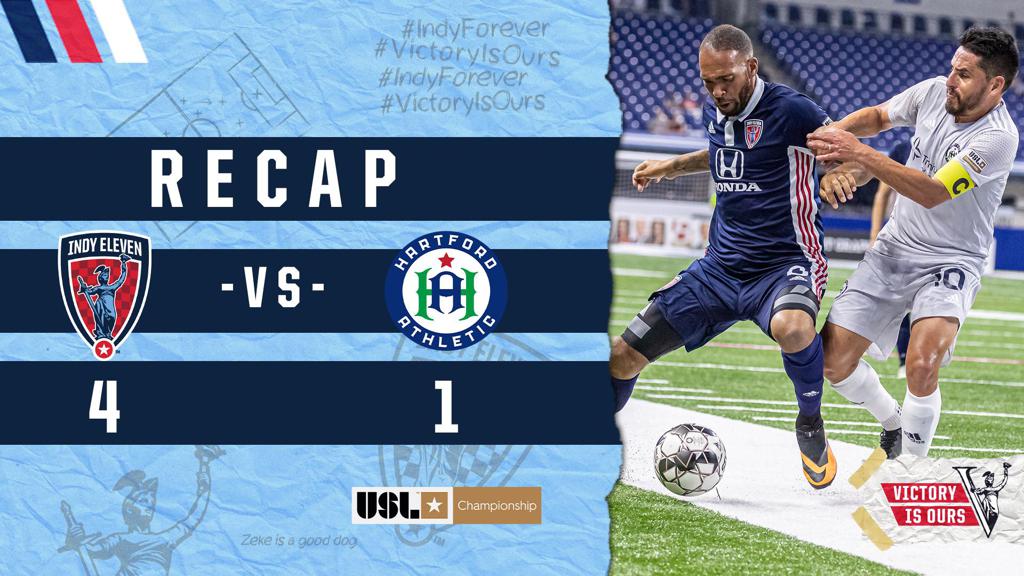 Indy Eleven scored four goals in a match for only the fifth time in club history – but for the second time already in 2020 – using tallies by four different players to soundly defeat the previously undefeated Hartford Athletic 4-1 at Lucas Oil Stadium.

The result extends Indy Eleven’s (5W-1L-0D, 15 pts., most in USL Championship) daunting home unbeaten streak in regular season play to 28 matches (21W-0L-7D), now tied for the second longest such run in USL Championship history. Embedded in that stretch is a 12-game home winning streak in regular season play dating back to last July 20 that is also second longest in Championship annals – but could reach the apex with another three points the next time out this weekend at the corner of Capitol & South.

After a back-and-forth first few minutes, it was Indy who broke the deadlock early and in style, a bullet header from Nick Moon counting for his first Eleven goal. Indiana’s Team broke forward exquisitely through Ilija Ilic, who held off a defender before spraying wide to Tyler Pasher, who played even wider to Macauley King on the right-hand side. It was King’s first-time cross that Moon met in the air, a beautiful lofted ball to the back post moving the scoreboard early.

The Hartford Athletic press forced a few early mix-ups at the back for Indy Eleven, but none that proved too harmful. Around the quarter-hour play was stopped after a collision between two Hartford defenders, with both Sam Strong and Alex Davey coming up quite bloodied from the knock of heads. After several minutes on the pitch, Strong would walk off but be removed from the match, while Davey had his head wrapped and bandaged and eventually made his way back into the match.

Hartford had the first true look at goal after the restart in play, a looping ball over the top that almost found Ever Guzman behind the Indy backline. However, the ball took a hometown bounce and saved Eleven ‘keeper Evan Newton from a difficult decision to exit his penalty area. The visitors followed that up with two more quick shots, both blocked in front of the goal by Karl Ouimette. Hartford midfielder Arthur Rogers forced a fine stop out of Newton in the 34th minute, a stinging effort from a yard inside the box. Newton could only parry it out however, and it fell to Tyreke Johnson who sailed the rebound effort wide.

Pasher won Indy a dangerous free kick toward the end of the half that he tried to curl in, but sent over the crossbar. The USL Championship’s leading scorer found his effectiveness limited during the opening stanza by the man-marking of Matheus Silva, but he grew into the match during first-half stoppage time and had a good shot saved by Hartford goalkeeper Parfait Mandanda. Pasher again created a great opportunity late into seven minutes of stoppage time, but was scythed down harshly by Davey, who received a booking. The ensuing freekick was built up into a shot from Conner Antley that Mandanda could only parry wide.

Hartford equalized almost immediately into the second half, as Alex Dixon’s shot deflected off Mitch Osmond and fooled Newton, who couldn’t see it coming toward his net and was wrong-footed by a slight deflection. Harry Swartz had plenty of space down the left and played the ball in, which the Indy defense failed to deal with.

The 1-1 deadlock would not last long, however, as Indy’s in-form talisman Pasher buried a shot past a helpless Mandanda after a great through ball from Ilic, making his first start of 2020 just days after the birth of his daughter. It was Pasher’s 20th goal for the club and sixth goal in six matches so far in the 2020 USL Championship, continuing a torrid pace that has him three goals clear of his closest competitors in the Golden Boot chase. The goal also marked his eighth goal in seven starts, a record dating back to the 2019 USL Championship Playoffs Eastern Conference Semifinal at Nashville SC on November 2.

Indiana’s Team about grabbed their third through Ilic, who was looking to get on the scoresheet himself after assisting the go-ahead goal. Once again, King whipped in excellent service, but the Serbian forward couldn’t quite direct his flick on target. King created another fantastic chance in the 56th minute, finding Pasher over-the-top, but again Indy were denied their third goal of the match as Pasher’s chip landed nervously wide, having beaten Mandanda. Pasher then blazed over the bar three minutes later, agonizingly close to his second of the match that would have been set up by Antley’s square ball towards the penalty spot.

Indy finally grabbed their long-awaited third goal in the 81st minute. Midfielder Drew Conner burst forward and latched on to a beautiful pass from the midfield stripe by Ouimette before tucking the ball coolly beyond Mandanda for 3-1.

It was 4-1 six minutes later thanks to a copy-cat goal of Conner’s, this time slotted in by captain Matt Watson, who bolstered his squad with his insertion in to the match the 71st minute. Using every bit of pace, Watson outraced a Hartford defender to another Ouimette service before chipping the ‘keeper.

Indy Eleven will end its busy stretch of five games in 15 days this Saturday, August 1, the same way it began – with a home contest against Sporting Kansas City II. Tickets for the 7:00 p.m. kickoff at Lucas Oil Stadium are available starting at $15 at indyeleven.com/tickets. Fans unable to attend the match on Saturday evening can follow the action live on WISH-TV, ESPN+, Exitos Radio 94.3 FM/exitos943.com (Spanish), and the @IndyElevenLive Twitter feed, presented by Central Indiana Honda Dealers.