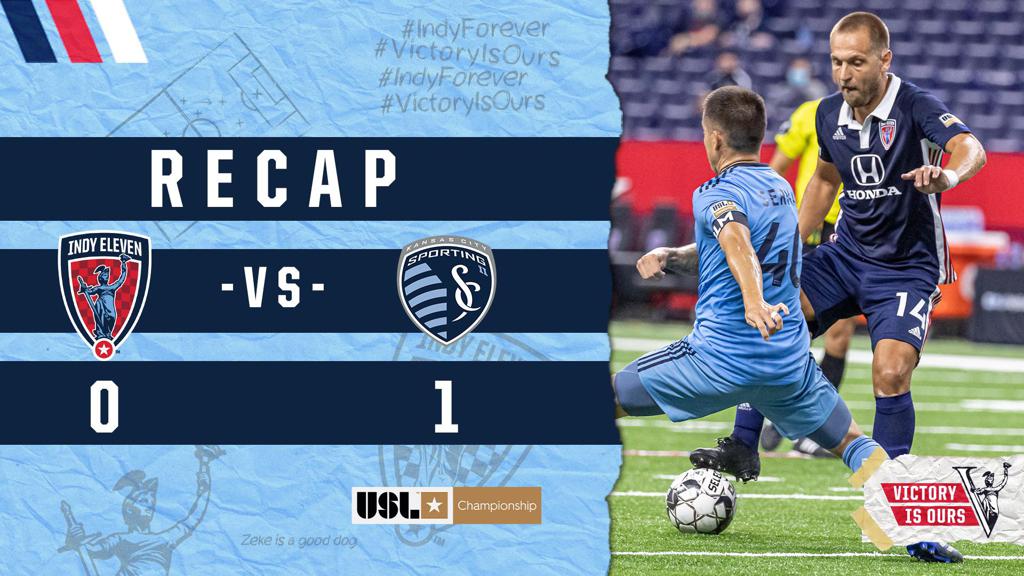 Indy Eleven tasted defeat at home for the first time in over two years, suffering a shock 1-0 loss at the hands of Sporting Kansas City II at Lucas Oil Stadium.

Despite the loss, Indy Eleven (5W-2L-0D, 15 pts.) remains solidly in first place in the Group E standings with a six-point cushion over Saint Louis FC, while Sporting KC II (2W-3L-0D, 6 pts.) drew even with Louisville City FC in third place courtesy of a fruitful road trip that saw it take wins in Kentucky and Indiana three days apart.

“Obviously disappointed to lose our first game in Lucas Oil for over two years. It’s been a great run of mainly winning, a couple ties here and there. Tonight, I feel like we looked tired. We’ve played five games in 14 days. We created enough chances tonight to win the game, put in a great effort. All the guys put everything into the game, so it’s disappointing we couldn’t be a little more clinical in front of the goal.”

The opening of the match was quite an even one, both sides’ defenses allowing little across a first half hour that lacked rhythm. Making his first start of the 2020 season, Eleven goalkeeper Jordan Farr was forced into heavy work for the first time 31 minutes in, when he went low to smother Fredlin Mompremier’s hard effort from the left corner of the penalty area.

Indy Eleven earned its best look of the stanza coming out of the hydration break in the 35th minute, when two more players earning their first 2020 starts – midfielders Kenney Walker and Felicien Dumas – linked up, the former chipping the latter into the left side of the area. Sporting KC II goalkeeper and Floyds Knobs native Brooks Thompson – making his second start in two weeks in his home state – did well to guard his right post on the 10-yard effort, looking big and deflecting out for a corner. The half ended without any more significant threats on frame, a statistically even first 45 minutes concluding as it started, 0-0.

Rennie would go to his bench for a pair of halftime subs, bringing Ilija Ilic on in attack for Nick Moon and Drew Conner in for Walker in the middle of the park. The onset of the second half saw Pasher popping up in dangerous areas, his header to meet Dumas’ pinpoint diagonal ball near the penalty spot in the 49th minute a prime example. The chance ultimately missed wide of frame, but served as a harbinger of what the USL Championship’s Golden Boot leader could offer in attack.

Rennie would bring on two more veterans to push for the full three points just before the hour mark with the introductions of wingers Matt Watson and Ayoze, the latter making his first appearance since suffering an injury against Sporting KCII two weeks prior.

It was a Sporting Kansas City II substitute, Enoch Mushagalusa, that would set up the game’s first tally in the 70th minute, his cutback pass from the left endline finding the foot of Daniel Barbir, who placed his chance from the top of the area perfectly into the upper right corner past Farr at full stretch to give SKC the shock lead.

While Indy would carry the possession from there on out, a true moment of danger would be delayed until the 84th minute when Ilic slipped Pasher into the right side of the area, only to see the Canadian fire his chance over the crossbar. The onslaught on SKC’s goal picked up in the 86th minute, but Thompson was on the spot – and on his line – when he stopped consecutive efforts by Andrew Carleton and Ilic near the six.

Seven minutes of announced stoppage time was music to Indy’s ears, and Indiana’s Team continued to ramp up the pressure, beginning with defender Neveal Hackshaw’s header off an Ayoze corner than rang the crossbar in the opening minute of extra play. Carleton just missed from long distance one minute later, followed by defender Paddy Barrett steering another header towards goal, but the looping chance off Conner’s service hit the top netting. Thompson’s slide tackle of Watson in the 95th minute at the edge of the area drew calls for a point to the spot, but the center referee deemed the challenge clean, and that marked the final chance for the Eleven to equalize.

“Now we need to get a little bit of rest and recover. The guys are on their knees basically. We’re in the middle of a pandemic, where guys were off for three months, they don’t get any preseason friendlies, hardly any training, and immediately we have to play five games in 14 days, including going to Saint Louis and Pittsburgh.” Said Rennie. “I think we’ve stood up to it really well. Overall, very pleased with the players and what they’ve done.”

From here, Indy Eleven heads on the road for two of its next three contests, beginning with the first installment of a crowded Louisville-Indianapolis Proximity Association Football Contest calendar over the next six weeks. The LIPAFC rivalry renews next Saturday, August 8, with Indy’s first visit to the new Lynn Family Stadium set for an 8:00 p.m. ET kickoff that can be followed live on MyINDY-TV 23, ESPN+ and Exitos Radio 94.3 FM/exitos943.com.

Indy Eleven’s next home match follows on Saturday, August 15, when Indiana’s Team will welcome Pittsburgh Riverhounds SC to Lucas Oil Stadium (for a piece of league history). Tickets remain available for the 7:00 p.m. kickoff, and fans that can’t make it to the corner of Capitol & South can follow on WISH-TV, ESPN+ and Exitos Radio 94.3 FM/exitos943.com.