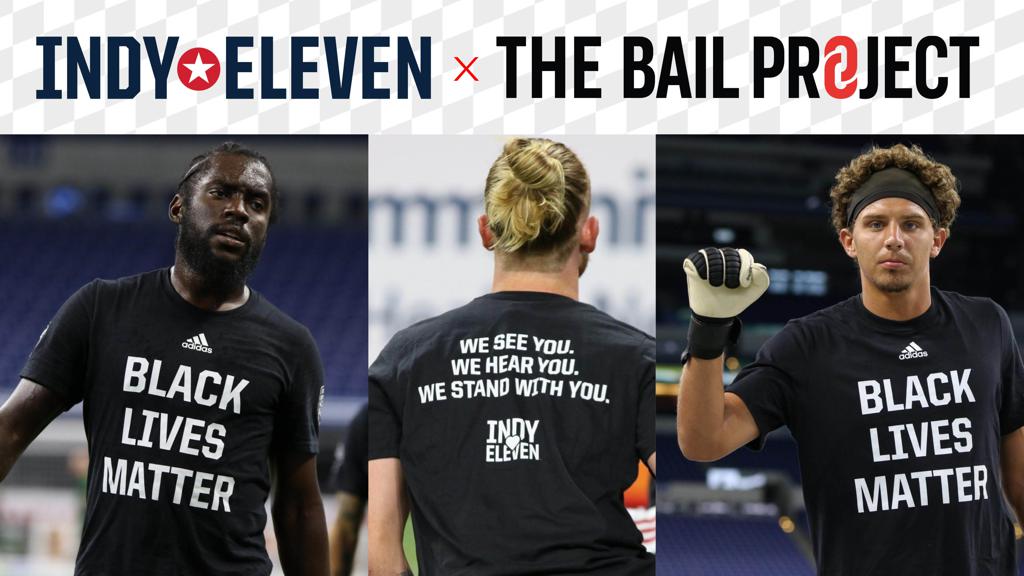 Indy Eleven is proud to announce the organization will make a contribution to The Bail Project that will see thousands of dollars in proceeds generated from sales and auctions of shirts recognizing the Black Lives Matter movement benefit The Bail Project’s National Revolving Bail Fund.

The Bail Project is an unprecedented effort to combat mass incarceration at the front end of the system. The national nonprofit provides free bail assistance and community-based pretrial support for thousands of low-income Americans every year, reuniting families and restoring the presumption of innocence.

“After being introduced to The Bail Project and learning more about their mission, Indy Eleven is proud to support the direct impact they make for citizens of Indianapolis and beyond in regards to combatting systemic racism,” said Indy Eleven Chief Executive Officer and President Greg Stremlaw. “We are continuing to listen, learn, and discuss ways to promote racial equality and social justice both inside and outside our organization. Working directly with Indy Eleven’s internal Diversity and Inclusion Committee, this donation is merely the latest example of these efforts, and we vow to seek more actions and partnerships that will benefit our city in the weeks, months and years ahead.”

The Bail Project believes that paying bail for someone in need is an act of resistance against a system that criminalizes race and poverty and an act of solidarity with local communities and movements for decarceration. To date, The Bail Project has secured freedom for more than 11,000 people in over 20 cities across the U.S. – including Indianapolis – while working with community partners to advance systemic change. Learn more at bailproject.org.

The Bail Project National Revolving Bail Fund is a critical tool to prevent incarceration and combat racial and economic disparities in the bail system. Because bail is returned at the end of a case, donations to The Bail Project’s National Revolving Bail Fund can be recycled and reused to pay bail two to three times per year, maximizing the impact of every dollar, and 100% of online donations are used to bring people home.