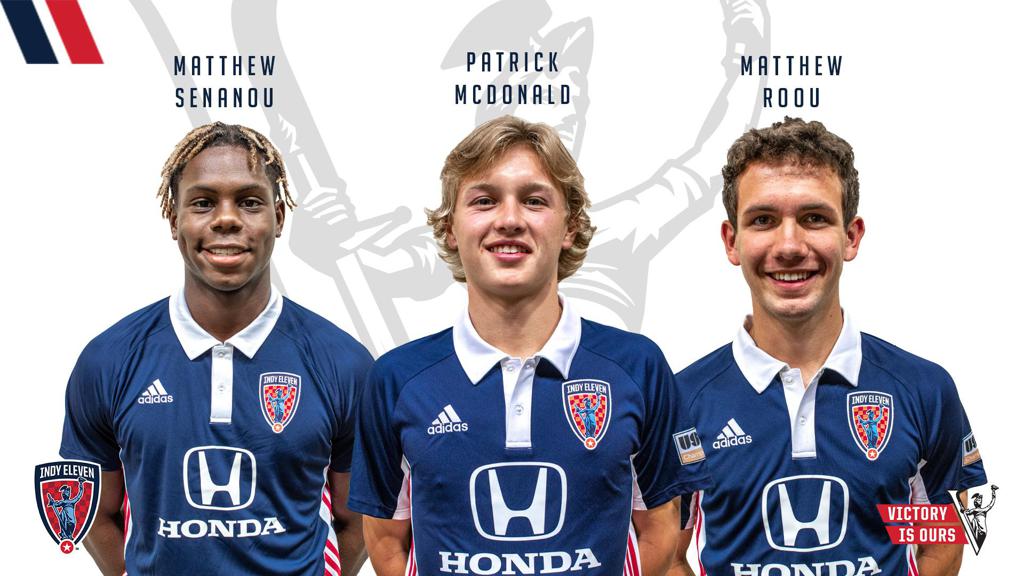 ‘We are excited to add three new academy prospects to our roster,” said Indy Eleven Head Coach Martin Rennie. “These players will replace the guys that have transitioned to play college soccer. All three players are very talented and will add a lot of quality to our squad. We look forward to continuing our work with the brightest young soccer talents in Indiana and beyond.”

The trio will replace a trio of previous USL Academy products – goalkeeper Holden Brown and midfielders Kyle Folds and Emerson Nieto – who were officially released from their contracts today. Folds and Nieto will stay in the Hoosier State to begin their collegiate careers in the coming weeks with eight-time national champion Indiana University, while Brown has departed to join the equally storied program at the University of Virginia.

“On behalf of the organization, we also want to thank Holden, Kyle, and Emerson for their contributions to the club and wish them the best as they begin the next steps of their careers,” continued Rennie. “We are proud to be a part of their growth as players and young men and are confident all three will use their experiences here to excel at their respective programs beginning this fall.”

Per club policy, terms of the USL Academy contracts that bring the trio to new players to Indiana’s Team will not be disclosed. In joining the club as USL Academy signings, McDonald (Germantown, Wis.; Shattuck-Saint Mary’s), Roou (Greensboro, N.C.; NC Fusion), and Senanou (Plainfield, Ill.; Chicago Sockers) will retain their future NCAA eligibility. With the addition of goalkeeper Alex Svetanoff on July 17, Indy Eleven continues to have four USL Academy players on its 25-man roster. Since the start of the 2019 season, Indy Eleven has inked nine players to USL Academy contracts, making it one of the USL Championship’s trend-setters when it comes to utilizing the roster mechanism.

All three new additions will be available for selection starting with this weekend’s renewal of the Louisville-Indianapolis-Proximity-Association Football Contest rivalry against Louisville City FC. Kickoff at the new Lynn Family Stadium in Louisville is set for 8:00 p.m. and can be followed live on MyINDY-TV 23, ESPN+ and Exitos Radio 94.3 FM/exitos943.com.

Patrick McDonald: “This is a great opportunity for me to develop as a person and player. The environment with Indy Eleven has been great so far and I’m excited for the rest of the season.”

Coach Rennie on McDonald: “Patrick’s a left-footed player who plays mostly out of the wingback position, and he brings something different because of that ability to play on the left. He suits our style of play and our system and has a lot of potential. We’re excited to have him coming from North Carolina to Indiana to join the club.”

Matthew Roou: “I am very excited for this opportunity to play with this great group of players and coaches and I hope to continue to learn and develop my game.”

Coach Rennie on Roou: “Matthew’s a very talented attacking player, a number 10 type of player. Creative, can score goals, and I believe he’ll benefit plenty by being in our environment and learning from our players. He comes from a very well-run program at Shattuck-Saint Mary's in Minnesota, and is committed to college at Notre Dame, so he's another high-caliber of prospect for us to bring in and we're excited to have the opportunity to work with him.”

Matthew Senanou: “I feel very honored to be given the opportunity to play here with Indy Eleven, and I hope my time here can lead to me having a successful footballing career in the future.”

Coach Rennie on Senanou: “Matthew is a very athletic central defender who has a lot of pace, agility and power. He’s from the Chicago area, and we played a game in preseason against a team based from there, Bridges FC, and he stood out to us. We were shocked to hear how young he was, only 16 at the time.

“The defenders have done a good job of taking him under their wings and teaching him a lot, helping him settle in, and that’s allowed him to show a lot of improvement with us already this summer. He’s different than the other guys on our squad cause he’s 6’5”, but he’s really agile and fast as well, so he’s got a great chance to develop into a great player.”