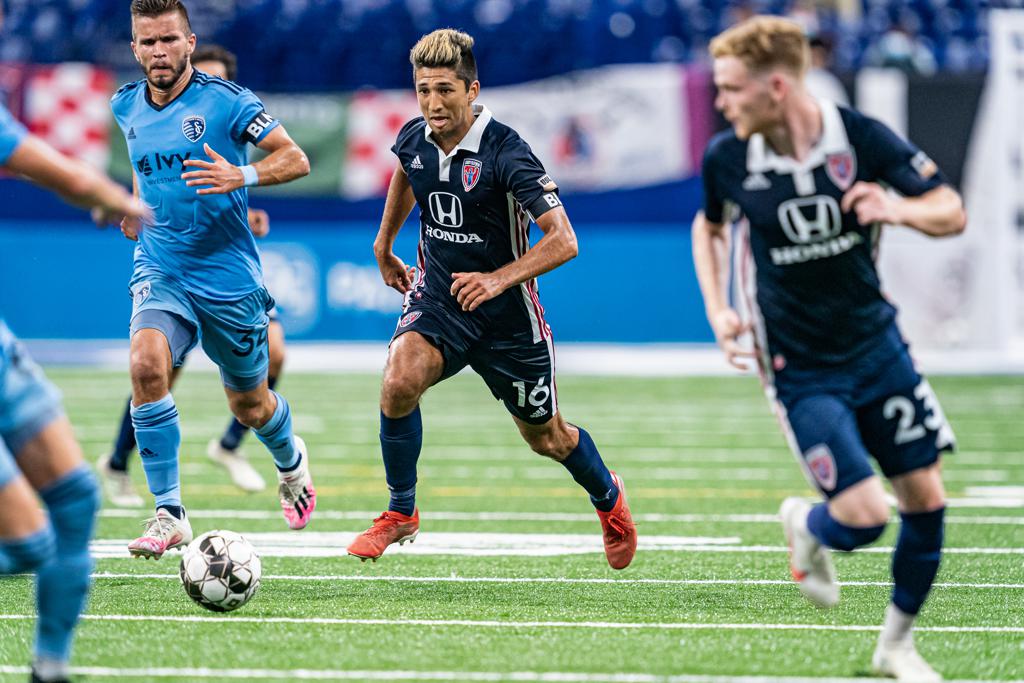 Each week in 2020, IndyEleven.com’s Spencer Sharpe will give his three takeaways from the performance of Indiana's Team. This week's edition comes after Indy's five-game stretch through Weeks 5 & 6.

After three games in eight days’ time, head Coach Martin Rennie used last week’s matchups against Hartford Athletic and Sporting Kansas City II to rotate his side. Excluding its quartet of USL Academy contract players, every man on the 2020 Eleven roster has started at least once following Saturday’s match. Jordan Farr, Felicien Dumas and Kenney Walker all made their first starts of the season last weekend as Rennie looked to freshen up the team as it ended its grueling run of five games in 15 days.

It was evident on Saturday that, even with the rotation, some players were feeling the effects of the schedule squeeze. Forward Nick Moon was switched off before heading into the second stanza, giving one of Indy’s impressive newcomers a needed break after starting six of the last seven matches. Rennie didn’t use fatigue as an excuse for the team’s 0-1 to Sporting KCII that snapped the team’s 28-match unbeaten streak at Lucas Oil Stadium – but he did acknowledge it was a factor.

“Now we need to get a little bit of rest and recover. The guys are on their knees basically. They had a long-time with no games and then suddenly it’s game, game, game, game,” Rennie said.

After a breezy start to the 2020 USL Championship season, the tight scheduling caught up to Indiana’s Team. Now the schedule turns back to the squad’s favor with only two multi-game weeks across the final two months of the season, so expect to see Indiana’s Team taking to the pitch with fresh legs from here on out.

6 FOR ONE, HALF DOZEN FOR THE OTHERS

Tyler Pasher’s six league goals in 2020 leads the USL Championship, but besides him, no Eleven player has totaled more than one strike on the season – and that’s not a bad thing. In additional to Pasher, six of his teammates have bagged once through Week 6: defenders Carl Haworth, Ayoze, Neveal Hackshaw and Paddy Barrett, and midfielders Matt Watson and Drew Conner.

With teams starting to limit Pasher’s time on the ball and paying more (deserved) attention to the Canadian attacker, Indy is taking a “committee approach to its goal production. As opponents focus on him, young guns Nick Moon and Andrew Carleton have had to most opportunity to run up front and use their pace and guile to get behind the defense. Still, the two of them combined have taken five less shots than Pasher has alone (22 vs. 27), with Moon being level on shot attempts with defender Paddy Barrett (9).

Against Sporting KCII on Saturday, the opposing midfield shut down attacks through the center thoroughly, a place where Pasher, Moon and Carleton all like operating. By the time Carleton was introduced, the game had largely become a direct affair for both teams and saw the tired legs of Indy attackers struggling to get onto the end of long passes that proved successful earlier in the week against Hartford.

While Pasher’s early output stands out amongst his peers, it begs the question: Does Indy Eleven need a stand-out second scorer? So far it’s managed to make the “Pasher & Co.” method work, but it will be interesting to see if another player is able to emerge and shoulder more of the scoring load across the second half of the shortened season.

Through seven matches in 2020, Indy Eleven have established themselves as elite controllers of the ball. Four Indy players are in the Top 6 in the league for passes heading into Week 7, with Neveal Hackshaw leading the pack with 482 passes. Other members of Indiana’s Team on that chart include Tyler Gibson (3rd, 367 passes), Paddy Barrett (T-4, 343 passes) and Karl Ouimette (6th, 332 passes).

Yes, the fact that the Eleven have played more games than anyone else in the Championship does need to be taken into consideration. However, Rennie’s squads have shown more and more comfort in possessing as his tenure has progressed, and Indy’s backline in particular has really gotten involved all across the pitch, spraying passes forward and diagonally to start an attack. Ouimette picked up two assists last Wednesday against Hartford Athletic, each coming from a lovely over-the-top ball, one that found Drew Conner and the other finding Matt Watson in the 4-1 win. Other Indy defenders with an assist are Carl Haworth, Ayoze and Macca King, three fullbacks that can ping a ball across the field with ease.

In Rennie’s 5-3-2 setup (or 3-4-3, depending on how you look at it), it’s important to hold onto the ball and keep possession. By having so many efficient passers in the team, it allows for more clear-cut chances from extended buildup play, as Indy have seen. Indiana’s Team leads the USL Championship in shots (112) and is third in goals (13).