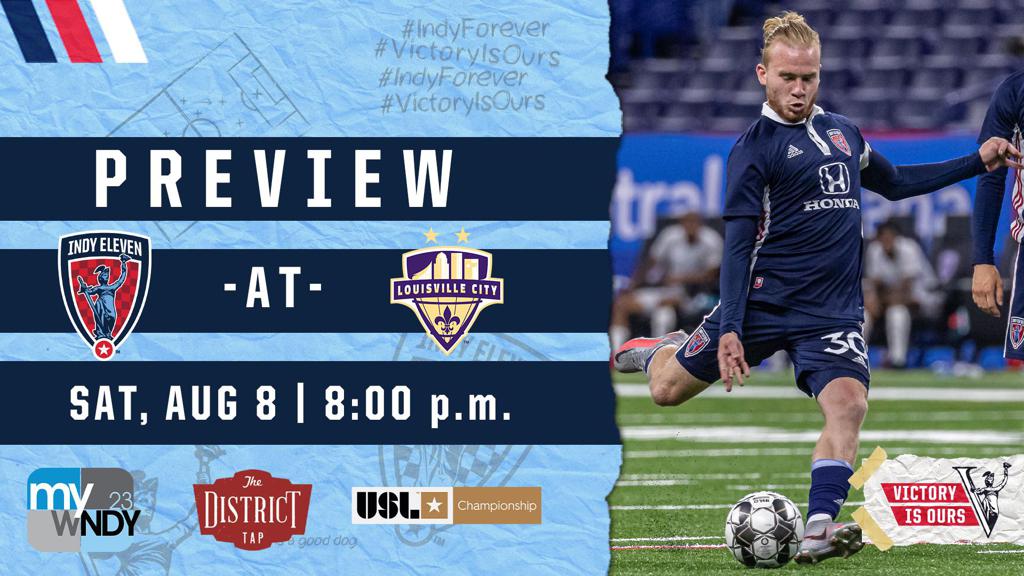 Facing each other for the first time this season, Indy Eleven and Louisville City FC are set for another rendition of the storied Louisville-Indianapolis Proximity Association Football Content this Saturday in Louisville. With both squads drawn into a four-team Group E for the revamped 2020 campaign, the four LIPAFC meetings this season carry added importance as they fight for the group’s two postseason slots. Splash in a dash of emotion that could carry over from last season’s epic USL Championship Eastern Conference Final into the mix and you have the ingredients for another tasty chapter in what is quickly becoming one of the Championship’s premier rivalries.

Indy Eleven started out red hot to begin the 2020 season, leaving many teams around the league trailing by a large margin since resuming the season on July 11.  Indiana’s Team is coming off an exhausting five-game stretch over the course of 15 days in which it claimed 9 of 15 possible points (3W-2L-0D), keeping it comfortably atop the Group E standings (5W-2L-0D, 15 pts.), five points clear of second place Saint Louis FC.

While many considered Louisville City to be a Group E favorite, the Kentucky side has struggled to shake the rust off from its quarantine break, getting out of the starting gates slow with a 2W-3L-0D record and six-point haul that leaves it at the bottom of the four-team group. The recently opened Lynn Family Stadium hasn’t quite become the fortress LouCity expected, with the Boys in Purple going 1W-3L-0D to begin life in their new home.

Indy Eleven have only had three away contests in 2020, winning two quite dramatically; a come from behind 4-2 victory at Memphis on the opening night of the season and a last-second 1-0 winner from Tyler Pasher in Pittsburgh on July 22 that snapped the host’s impressive 25-game home undefeated streak.

Where does one start when it comes to the single most important sporting and cultural series of events in human history? Indy Eleven will take its 2W-4L-3D LIPAFC record dating back to 2015 in all official competitions – USL Championship regular season, the Championship Playoffs, and Lamar Hunt U.S. Open Cup – across the Ohio River for Saturday’s match, the first for Indy Eleven at the new Lynn Family Stadium. After taking two of the first three meetings, Indiana’s Team has been winless against its rival the last six times out dating back to their first USL Championship meeting on May 5, 2018 (1-0 Indy win).

2019 was an even LIPAFC when it came to regular season meetings, both teams settling for 1-1- draws on June 29 in Indy and August 30 in Louisville before meeting in the Eastern Conference Final on November 9 at IUPUI Carroll Stadium. Indiana’s Team had a 1-0 advantage through Pasher’s 67th minute goal until deep into second half stoppage time, when Antoine Hoppenot’s last-gasp equalizer took the game to added extra time. Magnus Rasmussen and Luke Spencer scored in the extra sessions to earn LCFC a third straight appearance in the USL Championship Final and leave the Eleven looking towards 2020 for its turn to make further club history – and exact some revenge against its rival.

One of the best rivalries in the Championship will be on center stage across the next six weeks, with the teams set to square off four times in 39 days – Saturday and Aug. 26 at Lynn Family Stadium and Sept. 5 & 16 at Lucas Oil Stadium.

Forward Andrew Carleton has had a bright start to the 2020 USL Championship season as the on-loan Atlanta United (MLS) attacker begins to settle into his new surroundings. Carleton has registered a single assist off of three chances created in his first six appearances, but that does not tell the full story of impact he brings to the pitch.

The 20-year-old is a graceful dribbler and plays through the midfield with ease, and when playing alongside forwards Pasher and Nick Moon, Carleton’s ability to draw the attention of opposing defenders adds another layer of danger to Indy’s attack. Moreover, Carleton is also an efficient passer, completing 75% of his 120 attempts. Carleton has not opened his Indy Eleven goal account yet, but it’s not for a lack of trying – he’s totaled 13 shots, second most on the team.

For a young player still finding his place in the team, he’s fit in quite well. The offense seems to flow more effortlessly with Carleton on the pitch, his link up with the other Eleven attackers is fluid and he brings more bite to the middle of the field than your average number ten. Should he get the start on Saturday, expect him to continue to pull the strings in the attacking third.

Cameron Lancaster has made the most of his homecoming. For a squad that has only tallied four goals so far in the 2020 USL Championship, Lancaster has notched three of them, with two serving as game-winners in LCFC’s two wins, both 1-0 affairs at North Carolina FC (March 7) and versus Sporting Kansas City II (July 25).

Lancaster came up through the Tottenham Hotspur Academy before finding his way across the ocean to America. On-loan from Major League Soccer’s Nashville SC, Lancaster rejoined the Lou City team he had been with since first signing with them back in 2015, during their expansion season. In 98 total appearances, he has hit 45 regular season goals – taking home the 2018 Golden Boot with a record-setting 25 goals. Needless to say that the Lou City attack is running entirely through Lancaster, making him someone to keep an eye on at all times during Saturday’s match.