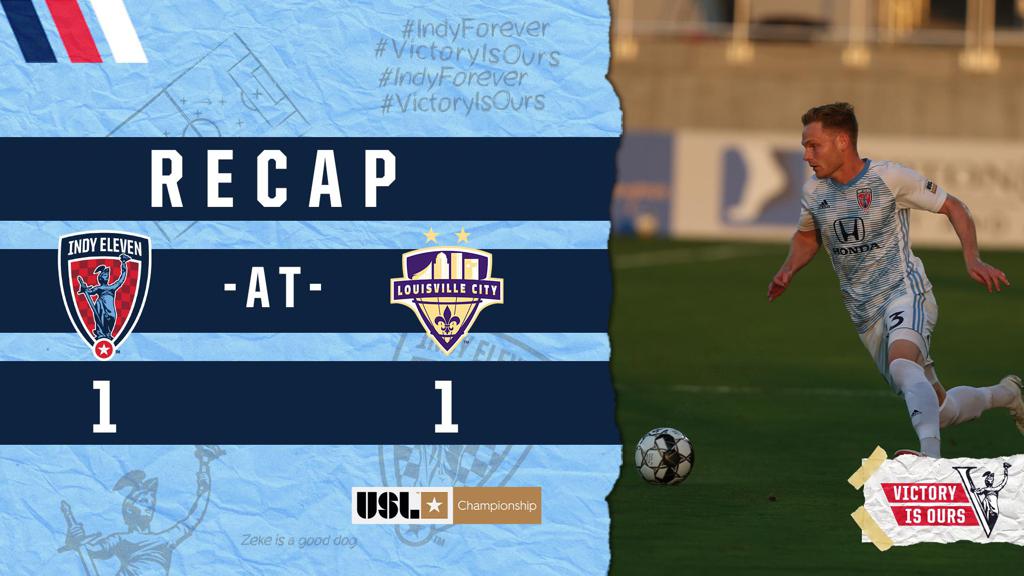 For a third straight time in regular season play, Indy Eleven and Louisville City FC settled for a splitting of points from a 1-1 draw, this time in the arch-rivals’ first meeting at Lou City’s new home of Lynn Family Stadium. Indiana’s Team used another goal by USL Championship Golden Boot leader Tyler Pasher – his seventh of the season – to even the game near the stroke of the hour, offsetting Speedy Williams’ early strike for Lou City.

“We can feel good about that one because we started slow in the first half,  but as we got closer to halftime we started to sort some things out and I felt we did quite well in the second half,” explained Indy Eleven head coach Martin Rennie. “We actually had a couple of really good chances to score again. I’m happy with that because when you don’t play as well as you’d like but are still able to get a point on the road, that’s always a good thing.”

Indy was first to strike in all three LIPAFC’s in 2019, but it took Lou City just over two minutes to flip that trend in the 2020 rendition. Napo Matsoso’s sliding 50-50 challenge won the ball, which he promptly sent to the far left post on a 30-yard diagonal that Williams headed across the face of goal, giving the home side an early advantage.

Louisville City’s pressure continued to earn it chances, and Eleven goalkeeper Evan Newton did well to keep it 1-0 in the 7th minute by pawing down Cameron Lancaster’s low effort. Brian Ownby dragged his rebound effort wide left, and a minute later a header landing just wide of frame from 10 yards left Lancaster shaking his head.

After that opening LCFC flourish, Indy Eleven was able to grab more of the play, and captain Paddy Barrett’s missed redirection of Andrew Carleton’s set piece served as the first chance of note. Former Lou City attacker Ilija Ilic put Indy’s first chance on frame in the 18th minute with a nice first-time effort that was smothered well by LCFC ‘keeper Ben Lundt.

Lancaster lurked again with a free kick opportunity in the 23rd minute that he sent just over goal, and Barrett did well to slide in and block Matsoso’s short breakaway shot at the top of the six right before the half hour mark. While Louisville City would eventually hold a 10-3 advantage in shots during the opening stanza, Indiana’s Team was able to hold serve after the early concession and take the match into halftime at 0-1.

A second half that needed a spark saw Carleton look to even the proceedings in the 58th minute, but Lundt did well to get low and left to urge his shot wide of goal. A minute later it was Carleton playing provider, and this time it was enough for the equalizer thanks to Pasher’s first time finish of his cross to the top of the six. The goal improved the July Championship Player of the Month candidate’s league-leading goal haul to seven on the season, now three more than a chasing pack of nine Golden Boot hopefuls on four apiece.

Pasher was unlucky not to get a quick second just after the hour mark, Lundt coming off his line and doing just enough to force the Canadian to send his breakaway chance just wide.

In the 63rd minute Williams saw a similar fate with his chance from 30 yards that Newton dove to cover at his right post just in case. The Eleven netminder made the same move five minutes later, this time sifting through traffic to make a stop on Ownby’s chance from 25 yards out.

Indy super-sub and captain Matt Watson looked to bag his second of the season in the 84th minute with a quick trigger from 20 yards, but his shot bounced wide left. As the match entered the 90th minute Ownby looked dangerous once more with a redirect at the right endline, but Newton guarded his left post well to snag the desperate chance before six minutes of stoppage time began.

Drew Conner had Indy’s best look in the added minutes, sending a left-footed curler on target two minutes deep that Lundt cradled on his line. In the 94th minute LCFC left back Oscar Jimenez took a try from 30 yards that forced Newton into another low stop, and a minute later he grabbed substitute forward Jason Johnson’s looping cross in his six to end an evening that technically counted just two saves, but saw the league’s career leader in wins, shutouts and saves plenty active in helping Indy to a well-earned point.

“We knew Louisville would be looking to get off to a fast start – they’ve been waiting for a game for 10 days. They did just that, and we weren’t quite as sharp as I would have like to seen us. Instead of composing ourselves and slowly getting ourselves back into the game I thought we tried to force ourselves back into it a bit quickly and put ourselves under more pressure,” said Rennie. “It was really during the water break where we got a chance to talk to each other and say ‘let’s calm down, settle down.’ Once we did that we actually played quite well. From that point, from the half hour mark onwards, I’d say we probably were the better team.”

Indy Eleven kicks off the second half of its revamped 2020 regular season next Saturday, August 15, when Indiana’s Team will welcome Pittsburgh Riverhounds SC on Racing Indy Night at Lucas Oil Stadium. Tickets remain available for the 7:00 p.m. kickoff, and fans that can’t make it to the corner of Capitol & South can follow on WISH-TV, ESPN+ and Exitos Radio 94.3 FM/exitos943.com.