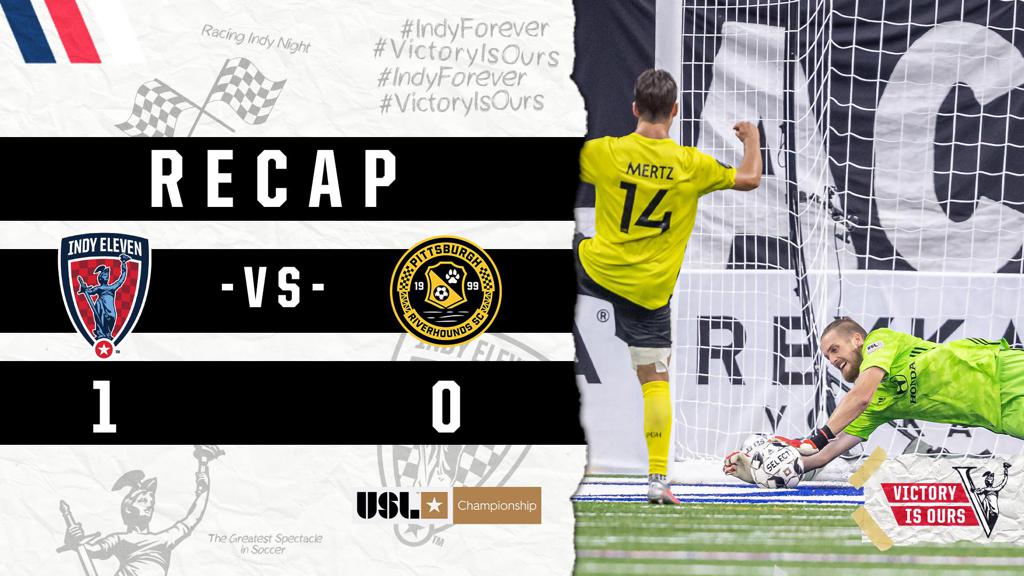 Though down a man for over a half of soccer, Indy Eleven repeated the scoreline from last month’s meeting with Pittsburgh Riverhounds SC, winning 1-0 thanks again to a sublime goal from the USL Championship’s most in-from striker, Tyler Pasher. Indy netminder Evan Newton made a huge penalty kick save early in the second half immediately after defender Ayoze’s ejection, one of three stops that made him the first goalkeeper in USL Championship history to reach the 50-shutout and 70-win plateaus.

With the victory, Indy Eleven (6W-2L-1D, 19 pts., first in Group E) put distance on Pittsburgh (4W-3L-0D, 12 pts., second in Group F) in regards to homefield advantage when it comes to any potential postseason meetings. The victory also vaulted Indiana’s Team back to the top of the overall USL Championship table on 19 points, two more than Eastern Conference mates Tampa Bay Rowdies and Birmingham Legion FC.

“I think first half we played pretty well, started the game well, scored a really good goal – Pasher did fantastic again,” said Indy Eleven Head Coach Martin Rennie. “And then obviously the second half, Ayoze gets sent off, then the game changes; we’re down to ten men, we’re under pressure. I thought the team did a fantastic job of limiting the chances, stayed organized and made sure that we did the job.”

It was Indy who had the first real goal-scoring opportunity, when Pasher broke forward in the 8th minute, but when pressured by the Riverhounds defense, he failed to get the effort on target.

Pasher didn’t have to wait long to extend his goal tally however, adding his eighth league goal in the 13’, after deftly rounding Pittsburgh ‘keeper Tomas Gomez and tapping home into an empty net. Midfielder Andrew Carleton provided the assist, a beautiful ball from the midfield which Pasher only needed to run on to.

The match started in stark contrast to the last meeting between the clubs at Pittsburgh on July 22, with Indy leading 1-0 early – rather than for seconds at the death – and fully in control through the first quarter hour. Pittsburgh were able to settle into the match about 10 minutes later and started to string together their own set of passes. Carleton and Pittsburgh midfielder Kenardo Forbes were the generals pushing the attack forward, including a great, sweeping free kick hit in by Forbes that almost found its way bundled into the Indy net. It was Skylar Thomas for the Riverhounds that got the final touch, but a swarm of Eleven players slid in to block the shot.

The Riverhounds had another close look with eight minutes left in the half, but stellar defending from Karl Ouimette only a couple of feet from the goal saved a certain equalizer off the feet of Ropapa Mensah. Indy also had a few half-chances during this time with Ayoze sending Pasher through twice, but solid play at the back from the visitors kept the scoreline at 1-0 heading into the halftime break.

While Indy controlled the first half, the fortunes were flipped only four minutes into the second half, when Ayoze received a straight red for denying a goal scoring opportunity for Pittsburgh when his headed clearance of Thomas Vancaeyezeele’s shot on the goalline hit his extended arm. The referee immediately pointed to the spot as well, but the momentum flipped once again, as Newton dove correctly to his right and saved the penalty attempt from Robbie Mertz.

“There’s a few things I look at and put that all together, at the end of the day, It’s just kind of instincts,” Newton said of his crucial stop. “If they’re pointing to multiple directions, I just go with my gut. Tonight, there were a few things I saw and luckily I was able to make the save.”

After the dismissal, the Riverhounds gained even more of a presence in the match, as expected, but Indy dug deep and shifted Pasher backwards to fill the space vacated by Ayoze.

Rennie also used some subs to accommodate the need for a new strategy, bringing on Conner Antley and captain Matt Watson to shore up the defense and midfield, which allowed Pasher to return to his preferred position.

Pittsburgh continued to push for the equalizer and came close twice through Steevan Dos Santos, who almost saw himself sent off for two hard challenges, earning a yellow card caution for one of them.

As the clock ran down, Indy Eleven found themselves under siege in the box, with all men on deck to head away the many dangerous crosses flying in. Tyler Gibson received the worst of one of those attacks, taking a forearm to the head that resulted in a new kit and being wrapped up, but it was that type of effort from Gibson, defender Mitch Osmond and others that refused to allow Pittsburgh a clear chance on goal.

Indy did manage to break forward once in the midst of the all the defending, but late-game substitute Nick Moon, who had beaten his man for pace down the left wing, made his pass late for the striding Cam Lindley, resulting in his shot being blocked out for a corner.

After six minutes of added time Indy’s work was done, earning the full points after holding onto their narrow 1-0 lead down a man and pinned in their own defensive half for over 50 minutes, resulting in Newton’s and the team’s third shutout of 2020.

Indy Eleven will get a rare break in action for the next 10 days, returning to play on Wednesday, Aug. 26 in the second installment of the Louisville-Indianapolis Proximity Association Football Contest. Kickoff against Louisville City FC at Lynn Family Stadium is set for an 8:00 p.m. kickoff (MyINDY-TV 23, ESPN+ and Exitos Radio 94.3 FM/exitos943.com). Then it’s time for the first LIPAFC home leg of 2020 on Saturday, September 5, when LCFC comes north up I-65 for a 7:00 p.m. kickoff (WISH-TV, ESPN+ and Exitos Radio 94.3 FM/exitos943.com), tickets for which are available at indyeleven.com/tickets.